When you speak to others, admit the truth when they are right.

People often deny the truth because they are afraid that others will look down at them if they admit making a mistake. But in fact, most people will respect you

These are quite spectacular. This is the area where my mother was born. See slide show attached.

I Love You More Than You Love Me
By Yanki Tauber 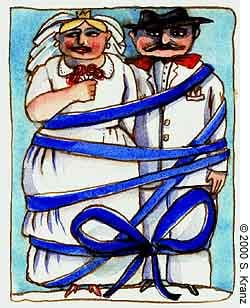 It's that time of year when we're reminded of our marriage. The prophets point out that G‑d wed us at Sinai, admonish us for our betrayals, and promise that there are good times yet ahead.

You can usually tell when two people are in love, but the best way to recognize a married couple is by their arguments. These are arguments that you won't see anywhere else, for the simple reason that they don't make any sense anywhere but within the context of marriage.

We find one such argument in this week's Torah reading. (Actually, the argument takes two different forms, explained in different ways by our sages; but underneath, I believe, it's the same argument.)

The Midrash Tanchuma explains: the Midianites caused the people of Israel to sin and worship the idol Pe'or, causing G‑d to punish His people with a plague. So G‑d tells Israel: "It is you who have an account to settle with them, for they caused Me to harm you." To which Moses responds: "Master of the Universe! If we had been uncircumcised, or idol-worshippers, or had denied the commandments, the Midianites would not have hated us. They persecute us only on account of the Torah and the precepts which You have given us. Consequently the vengeance is Yours . . ."

Rashi has a different take on the contradiction, and this theme is taken up by the chassidic masters: G‑d sees the war on Midian as avenging Israel, for G‑d's foremost concern is for His people; the people of Israel see the war as avenging G‑d, for they are concerned only with the honor of G‑d.

Typical marital argument logic. Husband: "How could you do that to me? When you act that way, it makes me angry at you, and then I hurt you. I'll never forgive you for for making me hurt the woman I love!" Wife: "If you wouldn't have married me, we wouldn't be so special to each other, and it wouldn't hurt you so much when I act that way. So it's all your fault."

We've been arguing that way for more than 3,300 years now.

This is Yehuda's editorial comment. I wish I could say we were arguing with people who love us..At this point, most of the world would still like to exterminate us.