What Your Body Does in a Day

If you try to make peace between two people who have been quarreling, don't take sides and tell one of the people that they are wrong and therefore should be the one to make peace. Since this person thinks that he is right and the other is wrong, he's likely to turn against you and quarrel with you!

Today, think about two people you know who are quarreling and try using this method to bring peace between them.

We learn this lesson from the greatest peace maker in the bible, Aharon the Cohen.

A Blast from the Past!!

Considered one of the cornerstone sketches of comedy, this mirror sketch by the Marx Brothers, uses their similar looks to set up a hilarious and cleverly-made

Only 10% of Applicants are Approved for a Gun License

Despite the terror attacks, only 10% of applicants have been approved for a gun license in Israel.
By: Jewish Press News Briefs
Published: October 28th, 2015 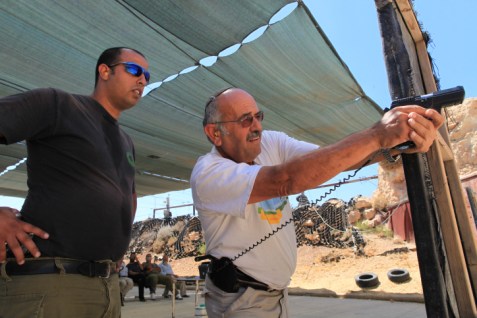 Despite the official easing of restrictions to get a gun license in Israel, along with the explicit calls by elected officials, such as Jerusalem Mayor Nir Barkat, for citizens to carry licensed weapons on them, and the much increased public demand for gun licenses in the wake of all the ongoing Arab terror attacks, 90 percent of the approximate 10,000 applications for a licensed weapons have been turned down, according to Vered Pelman, a reporter for Israel's Channel 1.

The 10% who made it past the first stage of government filtering still have many months of waiting ahead before they will get their gun.

Israel has one of the most restrictive personal gun licensing requirements in the world, and ranks as number 70 out of 178 countries in terms of gun ownership, with only 7.3 personal guns per 100 citizens, in 2014.

Those numbers don't include guns issued by the army or to guards via security companies.

Though unlike the US, once licensed, most gun owners can openly carry their weapons practically anywhere.

A significant percentage of Arab terrorists have been neutralized by civilian gun owners.

Some Arabs admit the truth

Sara Zoabi - an Israeli, Muslim and a Zionist, speaks out in the Israeli Knesset against incitement and what life is really like in Israel, at least before this current crisis started:

or http://www.yehudalave.com/
Posted by Rabbi Yehuda Lave at 2:00 PM