When fighting against the evil inclination, use the same strategy he uses. When he tries to prevent you from doing good deeds, tell him, 'It's just for this once,' or, 'I'm only going to start doing a little bit,' and similar statements that will enable you to get started. This way of talking to yourself lessens the difficulty of a task.
Think of a good deed that you would want to do, but don't do because you feel it will be difficult for you to continue doing it. Imagine that you will do it only once. Then take action.
Love Yehuda Lave
Subject: Learn SHeart Center's Continuous Chest Compression CPR | Arizona Health Sciences Center

This is really important. Don't pass it up.

Many of the talented and motivated individuals who leave the Haredi world could choose Modern Orthodoxy, but they don't. 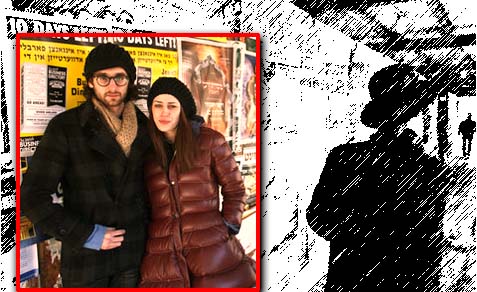 In the last number of years there has been great media and literary attention paid to the phenomenon of members of the Haredi community who choose to leave their lifestyle and neighborhoods – in some painful instances even becoming estranged from their families, as they move into mainstream secular society.
Books, investigative essays, interviews and websites have highlighted various elements of this phenomenon, while organizations have been formed to offer support to such individuals.
Particularly striking is the swing from one extreme to another, as many who once were intensely Haredi end up living an extremely secular lifestyle, detached from halachic observance of any kind or affiliation with any Jewish community.
To the best of my knowledge, there have not been systematic peer-reviewed studies of the extent of this phenomenon and whether the cases highlighted in the media are representative. Nevertheless, it is increasingly obvious to those who keep a close watch on the situation that a good percentage of those who leave the Haredi community end up rejecting halachic observance.
And that is a real tragedy, because so much of what these individuals wish for in their public comments – to study secular subjects on a high level, to participate in and enjoy the cultural and leisure activities of mainstream society, to find themselves in educational settings where rigorous questions and inquiry can be pursued, to encounter a less restrictive atmosphere surrounding male-female interaction – is available to them in the various shades and sub-communities of Modern Orthodoxy.
Many of these talented and motivated individuals, if they investigated and sought out Modern Orthodox settings, could find their niche as well as many of their most profound human, psychological and spiritual needs addressed in a community of committed Jews who engage fully with the modern world while remaining committed to their core religious values.
In addition, many of these individuals could contribute in positive ways to the Modern Orthodox community, bringing with them their life experiences, their feelings and struggles, and, in many cases, a deep knowledge of classical rabbinic literature.
Many of those who grow up in an intensely insular environment internalize a "black and whilte" view of the world. In this context the message one has imbibed is that if one does not fully embrace the cultural norms and religious assumptions of the community, one must therefore totally reject any connection to the values, practices and core beliefs of that community, along with its peripheral trappings and sociologically based norms. One leaves the community one was brought up in and passes "go" without stopping to consider alternatives and options.
This is reminiscent of the stories of Eastern European immigrants at the turn of the previous century who, upon realizing it was not socially acceptable to wear a kippah at their place of work, simply gave up the entire enterprise of living a Jewish life.
Or to take another example, one reads Bialik's classic poem "Hamatmid" today with a certain wistfulness of missed opportunities. In the poem, Bialik expresses his longing and appreciation of what the traditional bet midrash had given him and the Jewish people. Yet he feels he can no longer remain in that place, given his desire to experience the world and all its knowledge. For Bialik, as for so many young men and women of the late 1800s and early 1900s, religion and modernity could not co-exist under one roof. They felt they had to make stark choices, and no middle ground was available.
I still recall reading the poem close to thirty years ago as a junior at Yeshiva College and thinking, What would Bialik have done if a thriving Yeshiva College had existed back then and been supported by the traditional religious establishment? Or what would Bialik have done if the "acceptable" choices in Eastern Europe for a rabbinical education were not only Volozhin and Slabodka but also the equivalent of a Yeshiva University/RIETS or a Yeshivat Har Eztion or a Beit Morasha or a Yeshivat Chovevei Torah Rabbinical School?
Had the ethos and openness of a Modern Orthodox education been more readily adopted by the rabbinic elite and communities in those days, how many of our greatest minds and spirits would have developed without rupturing their entire connection to traditional observance and creativity?
It is time to reach out loudly and clearly to all those in the Haredi community who are struggling to find their niche in the Jewish world and declare: Come and be part of this thriving fellowship of Modern Orthodoxy. Of course we also have problems and challenges and disappointments and unfinished business to address, but we have strong, motivated people who are trying to find their way through their daily challenges in a spirit of integrating Torah and life, in all its majesty and grandeur.
We are committed to Torah and Jewish observance coupled with an openness to God's wonderful world – to appreciating the value of all human beings, to being ennobled by the best of general culture, to supporting the state of Israel, and to helping foster Jewish nationhood. You don't have to write yourself out of that grand Jewish story, and you have so much to add and contribute. Welcome, and let us grow together.
--