Happiness Comes From Within

In the Talmud (Pirkei Avos 4:1), Ben Zoma said: Who is wise? He who learns from every person. Who is strong? He who conquers his desires. Who is rich? He who is satisfied with what he has. Who is honored? He who honors others.
The Torah is teaching us to not to seek or demand happiness through any external factors, but rather to depend only on ourselves.
How do we see this concept expressed? The wise man learns from everyone (independent of any intellectual deficiencies in himself); the honorable person honors others (independent of whether others honor him); the wealthy person is satisfied with what he has (independent of how much

We Targeted Supporters of Israel's Disputed Territories
On Monday the IRS provided the 'smoking gun' pointed at its own head, in reports and information showing that the government agency made decisions based upon the views of pro-Israel groups which disagreed with the administration about the 'Disputed Territories.' 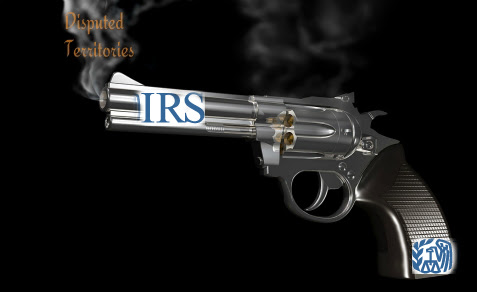 IRS documents revealed the Service had been targeting pro-Israel groups whose view on the territories differed from the administration's.
Ever since the beginning of the scandal concerning the United States Internal Revenue Service and the claims that it had a policy of treating differently – as in worse – organizations seeking tax exemptions if those organizations held positions in conflict with this US administration, there have been doubters.
And, of course, the way the story has been spun fans the flames of doubt – yes, the IRS finally admitted, after years of denial, that it had targeted certain groups and subject some groups to extra scrutiny, but there was no political impetus for the inappropriate action, there was just poor oversight of overworked civil service employees who were just trying to streamline their jobs.  Heck, the claim went, that was wrong, but what we now recognize as inappropriate actions weren't taken for political purposes. That was the claim.
And the IRS is trying desperately to make glib admissions, have some heads roll, even parade some of those heads around to show how seriously the IRS takes its need to be punished.  But now, it's time to move on.  The IRS is even providing a kind of amnesty for many of the politically conservative groups that complained – they are getting hand-delivered approval letters, and future applicants will be assured of an easier time going forward.
So, maybe it's time to move on.
Well, one little organization (the one this reporter founded and of which she is the president) refuses to go flying no matter how hard the IRS is shaking its leg to free itself.
Z STREET claimed when it filed its lawsuit for viewpoint discrimination against the IRS in August, 2010, that the IRS treated Z STREET differently subjecting it to additional scrutiny, because of its ideological views.
Two things happened on Monday, June 24, that proved, finally, that Z STREET – and others similarly situated – was correct.
First, the IRS released its 83 page document, "Charting a Path Forward at the IRS," in response to the Treasury Department's Inspector General who found that the IRS had engaged in inappropriate targeting of certain groups which had sought tax exempt status from the IRS.
The IRS Path Report begins:

The IRS used inappropriate criteria that identified for review Tea Party and other organizations applying for tax-exempt status based upon their names or policy positions instead of indications of potential political campaign intervention.

Well, there you have it.  The IRS admitted that it made decisions based on policy positions, rather than on prohibited activity.  That is exactly what Z STREET claimed – that it had been discriminated against because it holds positions that "contradict the Administration's public policies."
The second revelation was one made by Bloomberg News.  That media agency obtained IRS documents revealing that, in addition to the terms Tea Party and 9/12, other terms were used in flagging organizations seeking tax exempt status for additional scrutiny.  While the headline of the article, and what was the object of most media attention, was that terms that suggested not just conservative groups, but also liberal or progressive groups were given the IRS evil eye – words such as "occupy" and "progressive" were allegedly triggers, as was the word "Israel."
But far down in a long article the Bloomberg reporter explains that, "Disputed Territories" was considered problematic.  To wit:

'Disputed Territories"
The November, 2010 [BOLO - Be On the Look Out] list also has terms that could be related to Israel, looking for applications that 'deal with disputed territories in the Middle East' and 'may be inflammatory.'

Well, golly!  What kind of a group calls a particular area of land "disputed territories," which the vast majority of people, either for ideological or simply conformity refer to as the "West Bank?"  Yes, that would be strong Zionist groups such as Z STREET.
That the IRS chose to handle Z STREET's application in a particular way on the basis of our organization's position on this issue, and the fact that someone within the IRS even took the time to think such a position might 'be inflammatory,' is about as close as can be to a smoking gun revealing the IRS engaged in naked viewpoint discrimination.

That foul activity cannot be waved away.  Its stench is one that will only dissipate after there is a thorough investigation into how the  decision was made to use this particular criterion for evaluating an application.  Who approved that decision?  How many people knew about it?  How many organizations were subjected to it?

IRS documents revealed the Service had been targeting pro-Israel groups whose view on the territories differed from the administration's.
And now there are other delicate issues which demand attention.  If this was the basis for a decision, why were three IRS agents allowed – or were they forced? – to suggest under oath that there was another basis for delaying Z STREET's application? First there was the claim that perhaps Z STREET was really an "action" organization whose mission could only be accomplished by legislation.  Then there was the claim that Israel is a country where there is a "heightened risk of terrorism," and of course Z STREET required special scrutiny because it might be providing funds to terrorist groups.  Except, of course, Z STREET doesn't fund anything, and then there is the little matter of Israel being the object of terrorism, not the source of terrorism.
And, further, on the subject of Israel and terrorism – how is it that the IRS felt comfortable making the argument, presenting as a legitimate basis for giving special scrutiny to pro-Israel organizations the likely possibility that it meant those groups might engage in supporting terrorism, is an additional cause for alarm.  Where was the so-called "Israel lobby" and why weren't its members screaming at the top of their lungs that such an explanation was being offered?
The IRS scandal certainly isn't over.  But with respect to the portion that has to do with the Service's treatment of pro-Israel organizations, it looks like the IRS no longer has much basis for denying it engaged in viewpoint discrimination.  Now the question becomes how to make sure the prior wrong behavior is ferreted out, the wrongdoers are punished, and mechanisms are put in place that ensure such wrongdoing does not continue.
About the Author: Lori Lowenthal Marcus is the US correspondent for The Jewish Press. She is a recovered lawyer who previously practiced First Amendment law and taught.


Monet paintings in a slide show
my Blog: http://yehudalave.blogspot.c
or http://www.yehudalave.com/