The mitzvah to develop our character is the mitzvah to "walk in the ways of our Creator." Viewing events and situations in this light will elevate the mundane, for in the ultimate view of life nothing is mundane. Every moment presents its unique, once-in-a-lifetime opportunity.

By acting and reacting in ways that are kind, compassionate, understanding, and sensitive, you emulate the Creator and bring the Shechinah (Divine presence) into your home. No accomplishment could be greater. 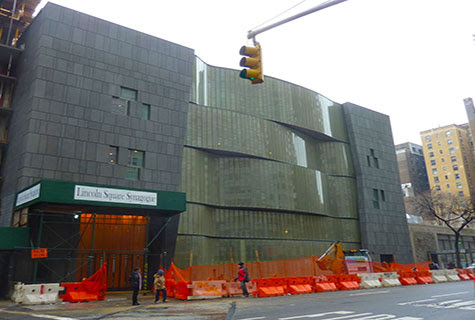 "Sanctuary, sanctuary sanctuary…" proclaims Quasimodo as he rescues Esmeralda, the gypsy girl unjustly accused of murder, and whisks her into the protection of the looming Notre Dame Cathedral in Paris. The 1939 film Hunchback of Notre Dame, starring Charles Laughton and Maureen O'Hara, is surprisingly filled with veiled references to the plight of the Jews in Europe. The notion of the church as a place of refuge is a major theme, regardless of the historical irony. Sanctuary is simultaneously a place of holiness where all are forbidden to enter and a place of protection for all. Needless to say, sanctuary reverberates throughout the ages in our synagogues and communal history.   Both the groundbreaking design of the new Lincoln Square Synagogue and the current exhibition of Mark Podwal's artwork at the Terezin Ghetto Museum in the Czech Republic reflect an engagement of the sanctuary motif.

Approaching the Lincoln Square Synagogue from the north, two massive arms of grey stone embrace the undulating glass façade of the sanctuary and beit medrash. These "arms" stand as silent Basalt stone guardians, punctuated by only six small windows on each side. Comfortably framed thus, the massive first-floor sanctuary and second-floor study-hall and library become a glowing hearth of Jewish devotion and learning for the Upper West Side. With the lights on at night this metaphor is literally true as the clear glass walls cast a warm glow on the sidewalk and Amsterdam Avenue. During the daytime the effect reverses, the clear glass welcoming inside a sense of the surrounding urban throng's hustle and bustle. Sanctuary here is an idealized celebration of openness, light and interchange.

This design by architect John Cetra (Cetra/CRI Architecture PLLC) observes the strictures of physical halachic orientation (facing east) as well as the social goals of communal inclusion and acceptance sought by the congregation. Cetra strove to expand the in-the-round model found in the old synagogue sanctuary just up the block into a civic orientation that would set a fundamental tone of friendliness and engagement. The result is remarkably successful.

Frequently the motif of explicit Jewish symbols in architecture has been used in modernist synagogues in a misplaced attempt to create a parochial architectural language for Jewish clients. Seldom is it convincing either conveying meaning or interesting architecture. Modernist and post-modernist form is persuasive in terms of function and invention rather than theology. Interestingly enough, much memorable synagogue architecture is simply wonderful evocations of dominant architectural styles of the time. The Prague Altneuschul (1270) is a fine example of a medieval Gothic chapel; the Scuolo Grande Spagnola in Venice (1640) a masterpiece of Venetian Baroque and the Touro Synagogue (1763) in Newport, Rhode Island a Georgian Colonial gem. This new architecture of Lincoln Square Synagogue, the first major new synagogue building in Manhattan in decades, allows the predominance of light entering the building and emanating from it to present an extremely powerful and positive message to all who encounter this shul. It proclaims that it is an ideal environment in which to pray and learn. 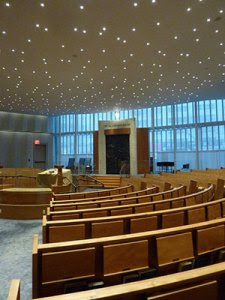 The warm wooden-clad portal penetrates the stone façade and brings one into the cool and functional lobby area. The tall windows at the far end with a vista of trees and the classically lit wall panels that line the curving sanctuary exterior give a hint of what awaits a visitor as he or she steps into the grand space of the sanctuary proper.

Six hundred and thirteen small lights embedded high in the ceiling generously light the space. Indirect light cascades down the gently angled wooden panels that curve around the walls, providing more light and overall satisfactory acoustics for seating that accommodates over 400 people. This is a genuinely large space that feels comfortable, relaxed and surprisingly intimate. The round design of the old synagogue has been opened up to a horseshoe-shaped seating pattern that embraces both the bimah and the large elegant aron (designed by David Ascalon), strategically positioned in the middle of the glass wall that floods the space with natural light.   A translucent scrim of curtains shields the lower part of the wall to remove distraction and provide complete privacy to worshipers. When one considers the transparency of the glass exterior wall, it creates a curious feeling of being simultaneously connected to the city outside and yet shielded and secured inside in a place of holiness. Private, communal and yet not shut off or ghettoized.   This new Lincoln Square Synagogue is a stunning addition to the architectural lexicon of modern sacred spaces, at heart a simple sanctuary that provides refuge, community and dialogue, amply reflecting the aspirations of its bustling Modern Orthodox New York community.