How can you clarify if you do good deeds because it's "the right thing to do," or merely to gain honor and approval? Ask yourself, "Would I do this if I were all alone and no one would ever find out about my good deed?"

I Accept Who You Are, Not What You Do

'Accept me the way I am.'  The new pseudo-psychological 'mantra' that can excuse any kind of  impoliteness and insensitivity. No worries. Just go right ahead. Be boorish, self-centred, and downright rude.  That's fine. I am a very accepting person.  I'm ok – you're ok. But are you really ok?

'Acceptance' is often a veil behind which hides a lazy and non-caring person who adopts a posture of self-righteousness, staring down any accusation of character blemish, and throwing down the gauntlet of compassion: accept me as I am, otherwise it's you who is at fault, not me.

What does 'acceptance' really mean? At one end of the spectrum is ' I accept that you are a selfish individual and suggest you do something about it'. At the other end is 'I accept you, warts and all'.

In the former, 'acceptance' is being used as recognition of the fact – your silliness the result of immaturity: I recognize you to be an egotistic prima donna. In the latter, it is a statement of love affirming that your shortcomings will in no way affect my bond with you.

Whether 'acceptance' is correctly applied depends more on he who seeks acceptance rather than he who confers it. Should the request be forthcoming from a sulking, accusative, belligerent teenager, chances are that it's really a plea for love and should be responded to with loving non-acceptance. Should it emanate from a feeling of terror of facing an audience, it deserves the compassion of true acceptance. Context does count.

I have just completed my lecture tour of S. Africa and am on my way back to Australia as I write these words. One of the lesser desirable features of South African political and social climate is its acceptance of corruption. Corruption exists breathtakingly across society and administration, ranging from the President's sycophant appointments of cronies, through to the Police Commissioner tipping off an associate commissioner about imminent charges of police racketeering and fraud, through to the cop demanding a bribe to drop the 'speeding' charge.

Or it may find its expression in the public response yesterday of a senior executive of a failed major bank, himself now a multi millionaire, responding to the plight of the poor who lost their money, with the words: "f*** them". Or acceptance of the government's ill advised affirmative action program creating a cadre of excess lawyers, with many female graduates being reduced to pouring the tea and used as sexual lures for potential customers.

All this - a sad obituary to the optimism and self-sacrifice of Nelson Mandela.

What struck me most was the fatalism – the acceptance – by the black South African community that this is the way. One must never accept anything else than a quest for equal and deserved opportunity for all people. Acceptance of evil corruption is an albatross around the neck of a country's future.
"I am bad because society made me that way" is simply unacceptable. The fact that you rationalise your shortcomings tells me you know the difference between right and wrong.

You are bad because you chose it, with eyes wide open, attracted by its darker lures, and seeking its thrills and ego satisfaction. You got caught up with a pitiful acceptance of a distorted norm of society.I accept that you have erred. But I don't accept the errant behaviour 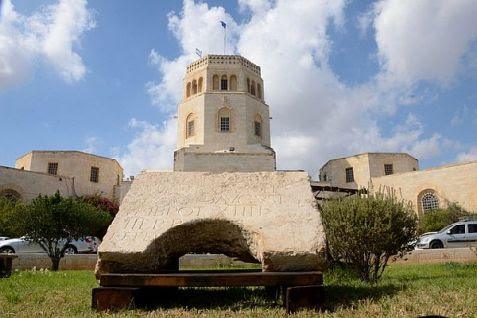 A rare find of tremendous historical significance has been discovered in Jerusalem: a fragment of a stone engraved with an official Latin inscription dedicated to the Roman Emperor Hadrian.

Researchers say this is among the most important Latin inscriptions ever discovered in Jerusalem.

The fate of Jerusalem following the destruction of the Second Temple (70 CE) and prior to the Bar Kokhba revolt (132-136 CE) is one of the major issues in the history of the city and in terms of the Jewish people's connection to it.

In the past year, the Israel Antiquities Authority has carried out salvage excavations in several areas north of the Damascus Gate to the Old City of Jerusalem. It was in one of those areas that the stone fragment bearing an official Latin inscription from the Roman period was discovered.

According to IAA excavation directors Dr. Rina Avner and Roie Greenwald,  "We found the inscription incorporated in secondary use around the opening of a deep cistern.

"In antiquity, as today, it was customary to recycle building materials and the official inscription was evidently removed from its original location and integrated in a floor for the practical purpose of building the cistern. Furthermore, in order to fit it with the capstone, the bottom part of the inscription was sawed round."

Upon finding the inscription it was immediately clear to the excavators that they had uncovered an especially significant discovery, as indicated by the size and clarity of the letters.

The inscription, consisting of six lines of Latin text engraved on hard limestone, was read and translated by Avner Ecker and Hannah Cotton of the Hebrew University of Jerusalem.

The English translation of the inscription is as follows: (1st hand)To the Imperator Caesar Traianus Hadrianus Augustus, son of the deified Traianus Parthicus, grandson of the deified Nerva, high priest, invested with tribunician power for the 14th time, consul for the third time, father of the country (dedicated by) the 10th legion Fretensis (2nd hand) Antoniniana.

According to Ecker and Cotton, "This inscription was dedicated by Legio X Fretensis to the emperor Hadrian in the year 129/130 CE." Their analysis shows that the fragment of the inscription revealed by the IAA archaeologists is none other than the right half of a complete inscription, the other part of which was discovered nearby in the late nineteenth century and was published by the pre-eminent French archaeologist Charles Clermont-Ganneau. That stone is currently on display in the courtyard of Studium Biblicum Franciscanum Museum.

Only a small number of ancient official Latin inscriptions have been discovered in archaeological excavations throughout the country and in Jerusalem in particular.

There is no doubt that this is one of the most important of them.

The significance of the inscription stems from the fact that it specifically mentions the name and titles of Hadrian who was an extremely prominent emperor, as well as a clear date. The latter is a significant and tangible confirmation of the historical account regarding the presence of the Tenth Legion in Jerusalem during the period between the two revolts, and possibly even the location of the legion's military camp in the city, and of one of the reasons for the outbreak of the Bar Kokhba revolt several years later and the establishment of 'Aelia Capitolina'.

Even after 2,000 years the inscription is in an impressive state of preservation. Once the excavation findings are published, the inscription will be conserved and put on display for the public.

The events of the Bar Kokhba revolt are ascribed to the reign of the emperor Hadrian. He is remembered in Jewish history for having issued dictates imposing the persecution and forced conversions of Jews, which the sources referred to as the 'Hadrianic decrees'.

The history of the Bar Kokhba revolt is known from, among other things, the works of the contemporary Roman historian Cassius Dio, who also mentions Hadrian's visit to Jerusalem in the year 129/130 CE, within the framework of the emperor's travels in the eastern empire. These travels are also documented on coins issued in honor of the occasion and in inscriptions specifically engraved prior to his arrival in different cities. This is apparently exactly what happened in Jerusalem.

The completion of the two parts of the text reveals an especially large inscription that is quite impressive. According to Dr. Abner, "The inscription itself might have set in the top of a free-standing triumphal arch on the city's northern boundary such the Arch of Titus in Rome."

We know from ancient writers and the inscriptions on coins that the new city, which Hadrian established, was granted the status of 'colonia' (that is, a city whose citizens and gods are Roman) and its name was changed to Aelia Capitolina (COLONIA AELIA CAPITOLINA in Latin). That name incorporates within it the emperor's name that is in the inscription, whose full name is Publius Aelius Hadrianus, and Rome's main family of deities.

There is no doubt that the discovery of this inscription will contribute greatly to the long-standing question about the reasons that led to the outbreak of the Bar Kokhba revolt, IAA archaeologists said.

It is possible that the reason for the rebellion lay in the construction of Aelia Capitolina and the establishment of the pagan temple on the site of the Jewish Temple Mount.

Conversely, perhaps the above were the results of the revolt, researchers theorize: punitive action may have been taken by Hadrian against those who rebelled against Roman rule.