Protests at site of Terror Attach and Tax Accountant Humor

Rabbi Eliyahu Dessler wrote: "When you have a true ambition for something, you will not give up hope. Giving up hope is a sign that you are lacking ambition to achieve that goal.

Adam and Eve remained single to avoid the marriage penalty.

In a very early case, the Tax Court rejected Eve's contention that the cost of the apple she administered to Adam was a deductible fertility medication expense.

Noah deductions were limited because the 40 days and 40 nights he spent on the ark converted it into a vacation home.

The divinity pays tax with pennies from heaven.

On Labor Day, all income is subject to FICA or self-employment tax.

In the Wizard of Oz, the tin man was actually searching for a tax identification number.

On Arbor Day, the IRS sends out additional revenue officers to determine whether money does grow on trees.

Gone with the Wind is a film about Lois Learner's lost emails.

There is reality show regarding the Estate of Lucille Ball. It is called Heirs Lucy

I was on the train that went through the Protest

Nationalist activists tell politicians 'stop playing with us,' skirmishes break out with police who 'only use violence against Jews.'
By Hezki Ezra, Ari Yashar
First Publish: 10/23/2014, 10:29 PM 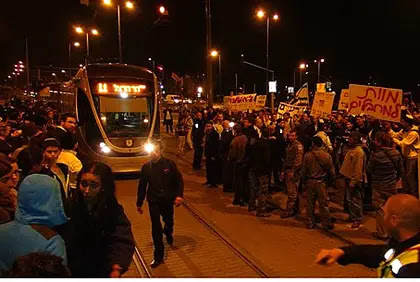 Hundreds of activists from the Otzma Yehudit movement, associated with the Otzma Leyisrael party that just barely missed out of the last elections, gathered Thursday night at the Ammunition Hill light rail station where three-month-old Chaya Zisel Braun hy''d was murdered by a Hamas terrorist the night before.

In the protest that cried out against the collapse of security during the recent "silent intifada" of Arab terror in Jerusalem, protesters bore signs condemning Interior Security Minister Yitzhak Aharonovich (Yisrael Beytenu), demanding his resignation for not letting police properly erase the terrorism from the capital.

Attorney Itamar Ben-Gvir said at the rally "let them stop trying to fool us, stop trying to play with us, the people of Israel want revenge and demand from the government of Israel revenge."

"We came here to tell all the politicians who think they can sell us out in quiet - enough, stop trying to fool us all," emphasized Ben-Gvir.

The protesters shouted "Arab beware, Jewish blood will not be abandoned," along with "the nation demands to expel the Arabs, death to terrorists," a night after the terrorist drove his car into a crowd of people, wounding nine including Braun fatally and an 18-year-old girl critically.

Some of the protesters blocked the light rail tracks for a few minutes in an act of demonstration. Police forces started evacuating them by force, at which small skirmishes broke out and two protesters were taken in for questioning.

Responding to the skirmish, Ben-Gvir said "the ones guilty for the disorder that has developed is the Jerusalem police who deployed horses and cavalry and unnecessary force. The public is furious at the government and rightly so."

Nationalist activist Bentzi Gopshtain who also took part in the protest said "it's sad that the Israeli police under Aharonovich use violence against good Jews demanding revenge and doesn't raise a finger against Arabs who burn, stone and murder."