Courage can be a great time-saver. There are instances when you find yourself in a situation that is eating up a lot of your precious time. You would like to say or do something about it, but you find it difficult to do so. Utilize these situations as opportunities to build up your courage.


Send in the clowns -- Video


The IOC's refusal to permit a minute's silence for victims of the Munich terror attack 40 years ago has already provoked a protest from the Italian team, who staged a minute's solidarity silence outside the Israeli team's quarters.

Now a French swimmer has found another method of commemoration. Fabien Gilot, a member of the gold medal-winning 4 x 100 team raised his arm in triumph to reveal a tattoo in Hebrew reading: אני כלום בלעדיהם - in English: I am nothing without them.

It is a tribute to his grandmother's Jewish husband, Max Goldschmidt, an Auschwitz survivor and a huge influence on his life. 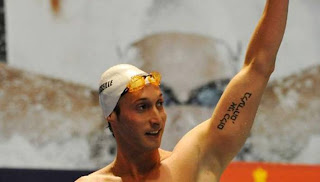