The US has kept Pollard in jail for 28 years. The same US is twisting Israel's arm to free more than 80 terrorists, and Minister Uri Ariel, understandably, cannot understand the American mind.
By: Tzvi Ben-Gedalyahu
Published: July 21st, 2013 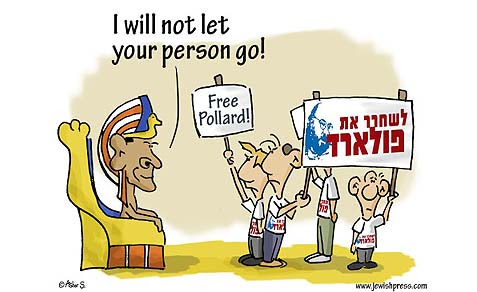 The US is backing PA demands that Israel free more than 80 Arab terrorists who have murdered dozens of Jews. The US refuses to free from jail Jonathan Pollard, whose crime was releasing some classified documents.
Photo Credit: Asher Schwartz

About the Author: Tzvi Ben Gedalyahu is a graduate in journalism and economics from The George Washington University. He has worked as a cub reporter in rural Virginia and as senior copy editor for major Canadian metropolitan dailies. Tzvi wrote for Arutz Sheva for several years before joining the Jewish Press.
t »

Original Schindler's List to be Sold on eBay for $3 million

There are only four surviving lists of the original seven copies of "Schindler's list.". One of the them is in Israel and now is being auctioned, and it is all yours for at least $3 million. 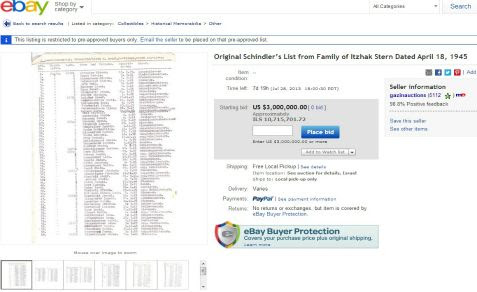 One of four existing copies of 'Schindler's List' is offered on eBay with a starting price of $3 million
Photo Credit: Screenshot of EBay

A list of names of 801 Jews rescued by German industrialist Oskar Schindler went on the auction block on eBay, with a starting price of $3 million.
The 14 pages containing the original Schindler's List were auctioned off by California collectors Gary Zimet and Eric Gazin, who are hoping to sell it for $5 million. So far, there are no takers, and bidders have until July 28 to stake their claim.
The date April 18, 1945 is written in pencil on the first page. Only male names appear on the German-language list, as well as each person's date of birth and profession.
The list was named for Oskar Schindler, a German businessman credited with saving more than 1,000 Jews from the Nazis by deeming them essential workers for his enamel works factories.
His story reached worldwide attention after the release of the 1993 feature film "Schindler's List." Directed by Steven Spielberg, the movie was based on the Booker Prize-winning novel "Schindler's Ark," which Australian novelist Thomas Keneally published in 1982.
Of the seven original versions of the list, only four are known to still exist — including two at Yad Vashem, the Israeli Holocaust Memorial Museum, and one at the U.S. Holocaust Memorial Museum in Washington.
The sellers said the copy being offered for sale on eBay is located in Israel, according to the paper.
"It is extremely rare that a document of this historical significance is put on the market," Zimet said. "Many of the survivors on this list and their descendants moved to the United States, and there are names on this list which will sound very familiar to New Yorkers.