There are many situations in life that at first seem as if they are bad for us, but eventually we look back and see how we benefited from what happened. A basic Torah principle is that everything that happens is ultimately for our good (Talmud - Brachot 60b).
Since you would not get angry at someone who helped you, do not get angry at others who "harmed you" -- as it is premature to make a judgment that this person has actually harmed you in the long run.
Love Yehuda Lave 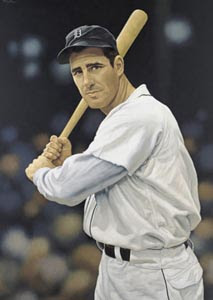 In 1938, Hank Greenberg of the Detroit Tigers narrowly missed breaking Babe Ruth's single-season home-run record of 60 home runs. Greenberg hit his 58th homer with two weeks remaining in the season, but several pitchers then intentionally walked him rather than give a Jewish man a chance to break Babe Ruth's record. (He led the league that year with 119 walks.) Though Greenberg disputes this motive, he did acknowledge being subject to the most vicious ethnic taunting seen in the sport since the days of Jackie Robinson in 1947. Greenberg testified: "During my first year in the big leagues, the remarks from the stands and the opposing bench about my Jewish faith made life for me a living hell." Greenberg grew up in an observant Jewish household, and did not play on Yom Kippur. In 1954, he became the first Jewish player to be elected to baseball's Hall of Fame in Cooperstown.

There is a story from our sages (called a midrash) that G-d "shopped" the torah to different races and each of them rejected it because it forced them to give up what each race was famous for. Until he got to the Jews who accepted the bible. This is a joke based on that midrash. Remember it is just a joke:


God went to the Arabs and said,
'I have Commandments for you that will make your lives better.'

The Arabs asked, 'What are Commandments?'
And the Lord said, 'They are rules for living.'

'Can you give us an example?'

'Thou shall not kill.'

So He went to the Blacks and said, 'I have Commandments.'

The Blacks wanted an example, and the Lord said, 'Honor thy Father and
Mother.'

'Father? We don't know who our fathers are.
We're not interested.'

Then He went to the Mexicans and said,
'I have Commandments.'

The Mexicans also wanted an example, and the Lord said 'Thou shall not
steal.'

Then He went to the French and said,
'I have Commandments.'

The French too wanted an example and the Lord said, 'Thou shall not commit
adultery.'

Finally, He went to the Jews and said,
'I have Commandments..'

'Commandments?' They said, 'How much are they?'

There. That, should piss off just about everybody.