A key element in why it's easy to lack gratitude is because human nature is to take things for granted when we get used to having them. To master gratitude we need to stop taking things for granted and to increase our thoughts of appreciation.
The Creator keeps bestowing His tremendous kindnesses on us each and every day when we are awake and when we are asleep, whether we are aware of them or not. There are so many things in our lives that we take for granted.
As an exercise, choose a day to not take anything for granted. Look at everything as if it were new. Look at everything as if this were the first time that this positive thing was happening. Look at all that you own as if you just bought or received them today. Look at what you have as if it were invented recently and you are one of the first people on the planet to get it.
Hopefully this exercise will give you the experience of what it's like to not take things for granted. 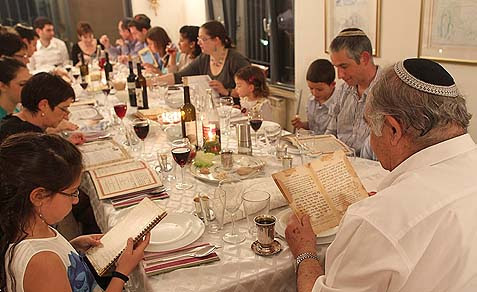 90% of Israeli Jews will participate in a Passover Seder, 80% of self-defined secular Jews said they believe in God, according to a study done by Israel's Central Bureau of Statistics.
While 55% said they would make sure to only eat kosher during the entire holiday, nearly all said they would make sure to eat Matzah and only kosher food on Pesach night.
Those are some pretty good numbers.

or http://www.yehudalave.com/
Posted by Rabbi Yehuda Lave at 2:21 PM