Your Mindset About Yourself

Your mindset about what you are able to do in life will have a global effect on your entire way of being. Most people view their perceived limitations as real. The reality is that every single person has a tremendous amount of potential.

In 1938, Hank Greenberg of the Detroit Tigers narrowly missed breaking Babe Ruth's single-season home-run record of 60 home runs. Greenberg hit his 58th homer with two weeks remaining in the season, but several pitchers then intentionally walked him rather than give a Jewish man a chance to break Babe Ruth's record. (He led the league that year with 119 walks.) Though Greenberg disputes this motive, he did acknowledge being subject to the most vicious ethnic taunting seen in the sport since the days of Jackie Robinson in 1947. Greenberg testified: "During my first year in the big leagues, the remarks from the stands and the opposing bench about my Jewish faith made life for me a living hell." Greenberg grew up in an observant Jewish household, and did not play on Yom Kippur. In 1954, he became the first Jewish player to be elected to baseball's Hall of Fame in Cooperstown.

Kindness knows no limit  CBS Story about an Angel Nurse

Want to smile and believe that humanity will triumph....listen to this....

In the early 1900s, Fort Bragg, California, residents threw their household  garbage over the cliffs above what is now Glass Beach.
It is hard to imagine this happening today, but back then people dumped all kinds of refuse straight into the ocean, including old cars, and their household garbage, which of course included lots of glass.

Beginning in 1949, the area around Glass Beach became a public dump, and locals referred to it as The Dumps.
Sometimes fires were lit to reduce the size of the trash pile (up to 30 feet high).
However, in 1967, the city leaders closed the area.
Various cleanup programs were undertake  through the years to try to correct the damage, but without success.

Over the next 30 years the pounding waves cleaned the beach, by breaking down everything but glass and pottery.
The pounding waves washed the trash up and down, back and forth.
Tons of polished, broken glass were created by the pounding surf.
These smoothened, coloured glass particles then settled along the sea shore in millions, and so a magnificent beach was formed.
The name was changed from, The Dump to what we currently know as, The Glass Beach.

The sea glass that was created is the product of a very long and interesting process.
It can take anywhere from 10 to 30 years to make sea glass, the name for any piece of glass that finds its way to the ocean and tumbles around in the water long enough to frost and smooth its surface.
Once it makes its way into the ocean, the glass is broken up into shards and is tumbled around in the water, where sand and other rocks act like sandpaper to smooth out its rough edges. Sometimes as the sea glass is passed through fire, it becomes fire glass, the rarest of sea glass with certain inclusions, just like precious gems.

In 1998, the private owner of the property determined that Glass Beach should belong to the public and in 2002 it became part of MacKerricher State Park, open to the public.
Within a period of a few years the Glass Beach won fame, attracting a large number of tourists every year.
Way back in time, people wanted to dump their glass products on this shore; now they would try to get one of these pieces to take home as a souvenir.
It is ironic but true that where once it was illegal to dispose the glass on the shore, it now is a crime to remove it. Visiting the Glass Beach today is a unique experience.
What makes it even more remarkable, are the sounds produced by the glass pebbles as they are being washed away by the gentle waves. 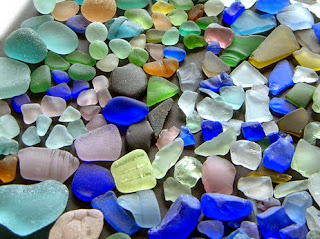 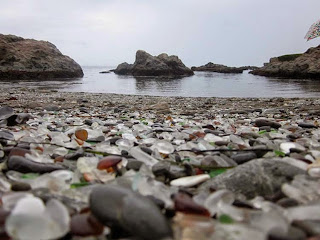 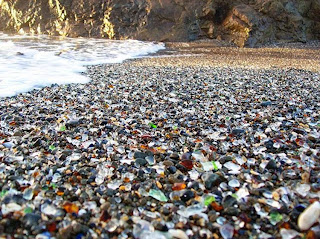 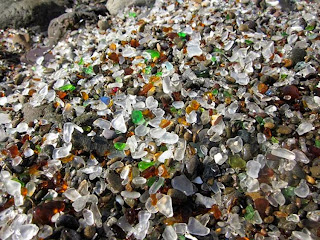 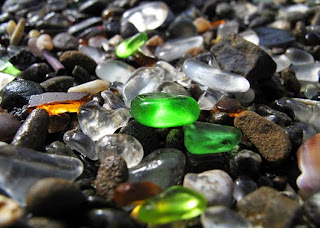 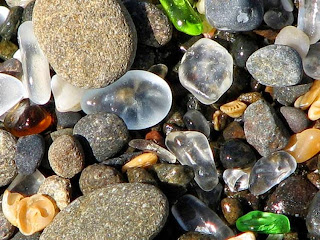 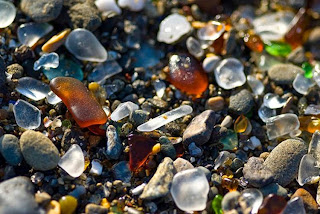 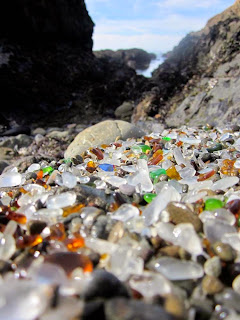 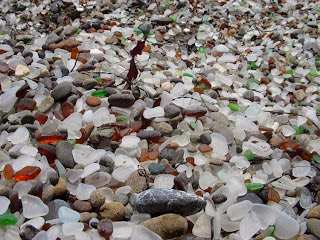 For years, the water beat against the different kinds of trash being dumped.

Glass, household appliances and even motor parts were discarded on the beach.

The waves and weather conditions wore down the overwhelming amount of garbage in the water, creating millions of beautiful smooth rocks.

It was a disgusting dump due to our carelessness, but nature corrected what humans ruined.

The beach's moniker was soon changed from The Dump to The Glass Beach, a more attractive name for the now-beautiful beach.

The Glass Beach and the surrounded twenty acres were purchased by the California State Park system and were incorporated into MacKerricher State Park.

The miraculous beach was finally under the protection of the state.

It's hard to believe the short-sighted mistakes we were making that could have potentially ruined this beautiful spot.

But thanks to natural processes, the ocean transformed the trash into the sea glass.

Each colored gem on the beach has its own story.

Then, the sapphire rocks are the remnants of broken apothecary bottles.