How the Internet got started and Hashem doesn't have a Blackberry . . . 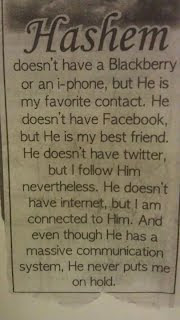 
It's important to differentiate between boasting and sharing your successes with people who sincerely wish you well and enjoy your success. Children especially have a strong need to show their parents that they have been successful. This is a way they build their self-image. Parents can encourage them to be grateful to Hashem for their success, building gratitude and balanced modesty. 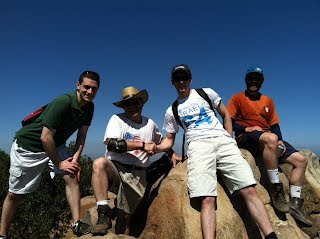 In ancient Israel, it came to pass that a trader by the name of Abraham Com did take unto himself a young wife by the name of Dot. And Dot Com was a comely woman, broad of shoulder and long of leg. Indeed, she was often called Amazon Dot Com.
And she said unto Abraham, her husband, "Why dost thou travel so far from town to town with thy goods when thou canst trade without ever leaving thy tent?"
And Abraham did look at her as though she were several saddle bags short of a camel load, but simply said, "How, dear?"
And Dot replied, "I will place drums in all the towns and drums in between to send messages saying what you have for sale, and they will reply telling you who hath the best price. And the sale can be made on the drums and delivery made by Uriah's Pony Stable (UPS).
Abraham thought long and decided he would let Dot have her way with the drums. And the drums rang out and were an immediate success. Abraham sold all the goods he had at the top price, without ever having to move from his tent. To prevent neighboring countries from overhearing what the drums were saying, Dot devised a system that only she and the drummers knew. It was known as Must Send Drum Over Sound (MSDOS), and she also developed a language to transmit ideas and pictures - Hebrew To The People (HTTP).
And the young men did take to Dot Com's trading as doth the greedy horsefly take to camel dung. They were called Nomadic Ecclesiastical Rich Dominican Sybarites, or NERDS.
And lo, the land was so feverish with joy at the new riches and the deafening sound of drums that no one noticed that the real riches were going to that enterprising drum dealer, Brother William of Gates, who bought off every drum maker in the land. And indeed did insist on drums to be made that would work only with Brother Gates' drumheads and drumsticks.
And Dot did say, "Oh, Abraham, what we have started is being taken over by others." And Abraham looked out over the Bay of Ezekiel , or eBay as it came to be known. He said, "We need a name that reflects what we are."
And Dot replied, "Young Ambitious Hebrew Owner Operators." "YAHOO," said Abraham. And because it was Dot's idea, they named it YAHOO Dot Com.
Abraham's cousin, Joshua, being the young Gregarious Energetic Educated Kid (GEEK) that he was, soon started using Dot's drums to locate things around the countryside. It soon became known as God's Own Official Guide to Locating Everything (GOOGLE).
That is how it all began. And that's the truth.

If you were alive in 1957, and old enough to enjoy Rock and Roll, you will probably remember the group, "The Diamonds" who had just launched their super hit "Little Darlin' ". For you that are too young to remember - it was a time when the performers were happy, enjoying themselves, respecting their fans, dressed appropriately and their lyrics could be understood. They did not feel obligated to scream, eat the microphone, mumble inaudible lyrics or trash the set.
In 1957, The Diamonds had a hit with "Little Darlin".  47 years later, they were requested to perform at Atlantic City ...  This link leads to both performances.
Watch the first one then scroll down for the new one 47 years later.
Remember; the lead singer of the Diamonds is also the father of TOM HANKS.
WATCH BOTH VIDEOS!!!!
http://www.flixxy.com/the-diamonds-little-darlin-1957-2004..htm