"Part of being careful is not to be excessively careful."

If a person is excessively careful about not doing anything unless he is absolutely certain of success, he will not accomplish very much. While we should be careful not to take rash risks, calculated risks are necessary for anyone who wishes to utilize his potential.

Before taking a risk, list the pros and cons and weigh them carefully. But don't demand absolute certainty before taking action.

Rabbi Shmuley Boteach: A Warrior-Scholar Falls in Israel – The Death of Benzion Netanyahu 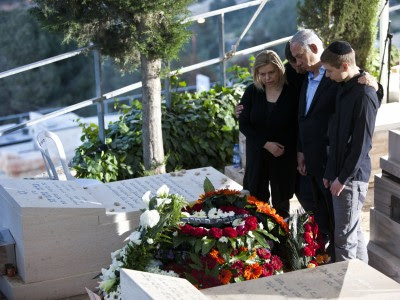 I had already twice hosted Benjamin Netanyahu – at the time Israel's deputy Foreign Minister – at the University of Oxford before I extended my first invitation to his scholarly father to lecture in turn. The elderly Netanyahu had recently published his internationally-celebrated opus Origins of the Inquisition in Fifteenth Century Spain, and I was fascinated by his theory of antisemitism extending not to the beginnings of Christianity but five hundred years before the birth of Jesus. I was likewise taken by the monumental sweep of his Spanish Inquisition narrative, a subject that had long fascinated me, and wanted him to address the subject with our students. Finally, I wanted to meet the man whose fierce Jewish patriotism had raised two of Israel's greatest sons, Yoni Netanyahu, the brave commando who fell leading Israel's Entebbe rescue operation, and Benjamin, who, by the time we hosted his father was serving as Israel's Prime Minister.

Professor Netanyahu, accompanied by his son Ido – whose caring for, and patience with, his father I shall never forget – would eventually lecture for all three of our L'Chaim Society branches, in Oxford, Cambridge, and London, with large student groups attending each. The lectures demonstrated the encyclopaedic scope of his scholarship and, at about 90 minutes each, his ferocious mental stamina and laser-like focus, though he was greatly advanced in years.

What I enjoyed the most was the down time we spent together, with long drives between the cities he was to speak at and then sitting at his London hotel together. Here was a Jewish nationalist of phenomenal determination. Zionism was in his DNA and I have rarely met a more passionate Jewish patriot or a prouder Jew. He had a sweeping view of history and could clearly argue the precarious state of the Jewish people throughout time. He believed in the totality of the Land of Israel and that the Jewish State dare not make territorial concessions that would undermine its security and history.

As providence would have it, I was actually with him Friday afternoon, October 23, 1998, at his London hotel when his son, the Prime Minister of Israel, signed the Wye River Memorandum that committed Israel to withdraw from territory it was required to transfer to the Palestinian Authority. The agreement was all over the news and we watched part of it on TV. Professor Netanyahu seemed deeply agitated, severely criticizing the Herculean and unfair pressure being brought to bear by the international community on Israel, in general, and on his son in particular, to relinquish land. One could see a deep connection between father and son and he spoke lovingly of the unimaginable responsibilities his son faced.

After his visit to Oxford, I began visiting him at his modest home in Jerusalem on my trips to Israel a few times a year. He welcomed me warmly and humbly each and every time. Although greatly advanced in years, he would give me hours of his time. We spoke of history, Jewish identity, modern politics, and human relationships. He asked detailed questions about the welfare of our students back in the United Kingdom and the state of my activities.

I remember once summoning the courage to ask him about the loss of his son Yoni, arguably Israel's greatest war hero. He responded quietly about the sacrifices all Israeli families had to make for the country to endure. He never boasted about his son's military glory and spoke of him as he were a common soldier. It goes without saying that he rarely discussed his middle son's achievement as Premiere of his country and on the occasions when the Prime Minister interrupted our conversations by calling his father, he never told me it was Bibi on the line. I only knew because he mentioned his son's name while speaking to him. Indeed, at his UK lectures some in the audience praised him as the father of the Israel's Prime Minister. He quietly thanked them and changed the subject. He was there to discuss the Spanish Inquisition and scholarship.

Professor Benzion Netanyahu was a man of rare humility, scholarship, patriotism, and sacrifice. His commitment to the State of Israel and the Jewish community will long serve as an inspiration and blessing to people everywhere. And there can be no question that the iron-clad commitment toward the Jewish people's security shown by Bibi, especially with regard to the current nuclear threat posed by Iran, was inculcated in a son who deeply loved, admired, and respected his learned father.

This is worth watching!

EACH FLOWER IS FILMED FOR TWO DAYS, AND PHOTOS ARE COLLATED WITHIN 7 MINUTES TO GET THIS EFFECT
Click : La vida de las flores