Magnificent Views and slide shows from countries around the world

Make the Highs Even Higher 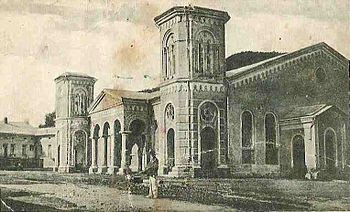 The Hasidic synagogue in Vyzhnytsia.

Vizhnitz is the name of a Hasidic dynasty founded by Rabbi Menachem Mendel Hager. Vizhnitz is the Yiddish name of Vyzhnytsia, a village in present-day Ukraine)

related that one of the great chassidic rabbis was once praying with much enthusiasm. His evil inclination came to him at a moment he was praying with the height of fervor, and whispered in his ear, "How can you be so insolent as to pray in such a manner? Yesterday you did improper things. You are unworthy of such prayers."

The righteous man was not thrown by the evil inclination and mentally replied, "It might be true that yesterday I have erred. Moreover, it is possible that tomorrow once again I might err. But right now I am in the middle of praying, so get away from me!"

These are GORGEOUS photographs from 4 different countries.
4 attachments — Download all attachments