Bennett-Husain CNN Debate: "Hamas is killing its own kids" and our potential for self improvement

Our Potential for Self-Improvement

The Chazon Ish (20th century Israel Sage) described the level a person is potentially capable of attaining if he has a long term goal for self-improvement: "If a person constantly strives to improve his character traits, it is possible he will eventually reach a level that he no longer gets angry, will not feel hatred or resentment, will not take revenge nor bear a grudge, will not have ambitions of seeking honor, and will not desire mundane pleasures."

Today, view every person you find difficult as your partner in character development. View every encounter as an opportunity to develop your positive qualities.

CNN debate about current Israeli situation. Who is killing the kids?

Of course, everyone knows that this ceasefire won't last.
By: Barry Rubin
Published: November 22nd, 2012 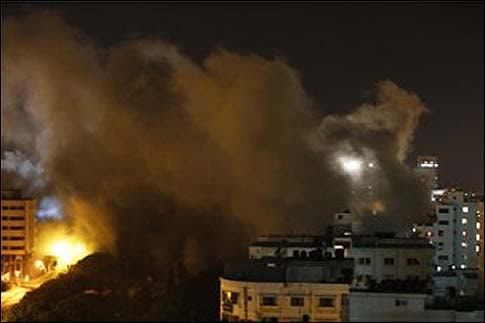 A ceasefire ending this round of the Hamas-Israel fighting went into effect at 9 PM local time, November 21, 2012. There were reports of more rockets being fired from Gaza at Israel after the ceasefire was to be implemented. Hamas immediately claimed victory. So did Netanyahu and here is his statement.

The brief agreement provides that both sides will stop all hostilities. For Israel, that included the targeted killings of terrorists and Hamas leaders. For the Palestinian side, the phrase, "All Palestinian factions," was used. That means the Hamas regime is responsible for any attacks by Islamic Jihad, al-Qaida affiliates, and other small Salafist groups. According to the text, at least, Hamas cannot hide behind allowing or encouraging such groups to attack and then disclaiming responsibility.

Another provision is that Israel will reopen the crossings and let people (a small number of Gazans seeking medical attention in Israel) and supplies to return to normal levels.

Egypt—not the United States, which isn't mentioned in the agreement–is the sponsor of the ceasefire. According to some reports which seem accurate, the ceasefire was agreed to through Egypt but delayed until Secretary of State Hillary Clinton arrived. By allowing Clinton to claim credit for the agreement, Israel may get something in return including most obviously a greater U.S. commitment to make the agreement work.

There is an interesting hint on this kind of secret agreement contained in Netanyahu's statement:

"Israel obviously cannot sit idly while our enemy reinforces itself with weapons of terror. Therefore we decided, President Obama and myself, that the United States and Israel would work together to fight the smuggling of weapons to the terror organizations – weapons, virtually all of which come from Iran."

Here is a very significant point that's being missed in all of the coverage and discussions regarding the ceasefire. Netanyahu's remark suggests there will be a new anti-smuggling effort involving U.S. intelligence, cooperation with other countries, and pressure on Egypt to make it harder to get weapons–especially missiles–into the Gaza Strip. It is clear that long-range missiles are the hardest thing to bring in and the easiest weaponry for Egypt to stop at the border. Whether this will have any U.S. effort does reduce the arms going to Hamas, of course, remains to be seen.

By helping negotiate and guaranteeing the ceasefire, Egypt also clinches its gaining more U.S. aid, though that probably would have happened anyway. Israel will know to what extent Egypt is helping Hamas smuggle in weapons, looking the other way, or merely not trying hard enough. This will be a key issue in future Egypt-Israel relations.

On Hamas's side, the decision to reach a ceasefire was motivated by the damage the organization was suffering and fear of a massive Israeli ground attack. Perhaps most important, however, was that Hamas found it was not receiving strong support from Egypt and other states, especially because Cairo is now ruled by a Muslim Brotherhood government. Hamas is an independent branch of the Muslim Brotherhood movement. Apparently, Hamas did not consult with Egypt before escalating attacks against Israel, the factor that set off large-scale Israeli retaliation. In turn, Egypt, along with Qatar, the Hamas regime's main Arab funder, pressured the regime to stop the fighting.

The timing for a crisis could not be worse for the new Egyptian regime. It has not yet tamed its army, finished writing its constitution, or established the legitimacy of the parliament it dominates. At the precise time the war started, the Egyptian government was completing negotiations that can be expected to bring it almost $10 billion in aid from the European Union, International Monetary Fund, and United States.

Whatever Egypt does in future, it does not want trouble from Israel at present. Israel had also earlier reassured the Cairo regime that it would support an amendment in their thirty-year-old peace treaty that would allow Egypt to station more troops in the eastern Sinai. The number wouldn't be enough to threaten Israel but enough to help control the Salafist groups there that have targeted Israel several times in cross-border raids. That is, if Egypt wants to stop them from doing so. At any rate, Egypt faces attacks on itself from some of these groups as well.

Israel's motives included ending attacks on its civilian population which caused few fatalities but had a tremendously disrupting psychological and economic effect. The truth is that Israel's population, while overwhelmingly supporting the war, evinced more fear about the attacks than in earlier conflicts. The ability of Hamas to fire missiles toward Tel Aviv and Jerusalem–though this was partly a bluff since these missiles were almost emptied of explosives to get a longer range–set off concerns, especially in Tel Aviv. The Iron Dome system worked very well in shooting down a high percentage of the rockets outside the far south.

But Israel's most realistic interests–though not its preferences–were reached by agreeing to a ceasefire now. There was international, and especially U.S., pressure to avoid a ground attack which meant that the limit of its military gains using only air power had been already attained. Prime Minister Benjamin Netanyahu wants to develop the best possible relationship with newly reelected President Barack Obama, with whom he will probably be dealing with–assuming Netanyahu's reelection on January 22–for the next four years.

Equally important was that Israeli leaders–and public opinion generally agrees–know that a temporary ceasefire is the best outcome that can be obtained. A very large portion of Hamas's weapons, especially longer-range missiles, has been destroyed and it will take Hamas time to rebuild. While people can come up with ideal solutions in their heads the problem is that Israel does not want to return to rule the Gaza Strip (which would involve armed battles almost daily) and does not have international support for overthrowing Hamas.

In a reasonable world, the international community would support, even join, in bringing down the current regime and replacing it with the Palestinian Authority. After all, Hamas staged an armed coup and chased out its Fatah rivals, killing many of them brutally. It then openly declared its intentions to commit genocide against Israel and Jews generally; staged a constant series of terror attacks; forced out the small Christian population; let al-Qaida affiliated groups operate; and systematically taught children to grow up to be terrorists and suicide bombers.

Instead, however, the international community is determined to protect the survival of the Hamas regime and the Palestinian Authority would not take back rule over the Gaza Strip, either by its own efforts to overthrow Hamas or at the hands of a victorious Israeli army. If the war continued, some more Hamas leaders would be killed and munitions would be destroyed. But that additional benefit would be limited. At the same time, more civilians would be killed on both sides and the relatively positive international support and mild media criticism–by the usual standards, of course–would dissipate.

Of course, everyone knows that this ceasefire won't last. The key to anything more durable is if the Egyptian government decides that it wants to avoid another war because of its own interests. In other words, despite its hard line toward Israel, would the Brotherhood regime decide that it wanted to consolidate its rule over Egypt–totally transform the army; Islamize the society; and suppress Christians, women and secularist–before taking on Israel. Can it create a repressive regime and fight a jihad simultaneously or does it need to take on these tasks one at a time? By helping to broker the ceasefire, the Egyptian regime has also won points with the Obama Administration that should bring it benefits in future.