Fwd: What I learned about Whiskey

Seek and You Shall Find

Every person is obligated to love to do acts of kindness. But how can G-d legislate that we will "love" doing kindness?!

The concept of loving to do kindness means that it is not sufficient to wait until someone approaches you and asks you to help. Your love of kindness should be so strong that you actively seek out such opportunities.

From the bible, our example of this kind of pro-active kindness is our Father Abraham who had his own kindness hotel, specializing in taking care of travelers. This week, in the bible, his travelers turned out to be angels!!

I had always been against the abuse of liquor. Many People sang its praises, but it usually seemed to be people that abused it. As I have aged (hopefully like a good wine---whiskey once it finishes doesn't improve any more with age), I realize that there are some benefits if the consumption is controlled. Young people don't seem to be able to do this, so I recommend a minimum drinking age of 50. The main benefits come when you do it on the Sabbath when you are not going to drive anywhere (so there is no danger of thinking you are all right to drive) and you are going to take a nap to sober up. A little liquor (wine or whiskey), can actually make an old body feel relaxed.

Here is what I learned on my completed trip to Ireland.

A whiskey simply described as a Scotch, Irish, or Canadian whiskey is most likely to be a blend. A blend typically contains whiskey from many distilleries so that the blender can produce a flavor consistent with the brand, and the brand name (e.g., Chivas Regal, Canadian Club) will usually not therefore contain the name of a distillery. Jameson Irish Whiskey is an example of an exception, as it comes from only one distillery.

I brought back a bottle of Jameson from  Ireland. 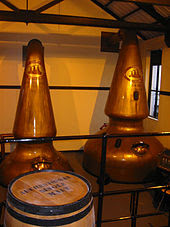 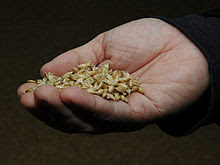 Malted barley is an ingredient of some whiskies.

Whisky or whisky-like products are produced in most grain-growing areas. They differ in base product, alcoholic content, and quality.

Malts and grains are combined in various ways:

Whiskies do not mature in the bottle, only in the cask, so the "age" of a whisky is only the time between distillation and bottling. This reflects how much the cask has interacted with the whisky, changing its chemical makeup and taste. Whiskies that have been bottled for many years may have a rarity value, but are not "older" and will not necessarily be "better" than a more recently made whisky matured in wood for a similar time. After a decade or two, additional aging in a barrel will also not necessarily make a whisky "better".

Most whiskies are sold at or near an alcoholic strength of 40% abv, which is the statutory minimum in some countries[16] – although the strength can vary, and cask-strength whisky may have as much as twice that alcohol percentage.

American whiskey is distilled from a fermented mash of cereal grain. It must have the taste, aroma, and other characteristics commonly attributed to whiskey.

Some types of whiskey listed in the United States federal regulations[16] are:

These types of American whiskey must be distilled to no more than 80% alcohol by volume, and any addition of colouring or flavouring is prohibited. These whiskeys must then be aged in new charred-oak containers, except for corn whiskey. Corn whiskey does not have to be aged but, if it is aged, it must be in un-charred oak barrels or in used barrels. The aging of corn whiskey usually is brief, e.g., six months.

If the aging for one of these types of whiskey reaches two years or beyond, the whiskey is then additionally designated as "straight" e.g., "straight rye whiskey". A whiskey that fulfils all these above requirements except that it is derived from less than 51% of any one specific type of grain can be called simply a "straight whiskey" without naming a grain.

There are also some other categories of whiskey that are recognized in the US regulations,[16] such as:

American blended whiskeys combine straight whiskey with grain neutral spirits (GNS), flavourings and colourings. The percentage of GNS must be disclosed on the label and may be as much at 80% on a proof gallon basis. Blended whiskey has the same alcohol content as straight whiskey but typically has a milder flavour.

Another important labelling in the marketplace is Tennessee whiskey, of which Jack Daniel's, George Dickel, Collier and McKeel,[17] and Benjamin Prichard's[18] are the only brands currently bottled. In practice, it is essentially identical to bourbon whiskey.[19][20] Whiskey sold as "Tennessee whiskey" is defined as Bourbon under NAFTA[21] and at least one other international trade agreement,[22] and is similarly required to meet the legal definition of Bourbon under Canadian law.

Distillation spread from Ireland to Scotland (about one hundred years later) and originated from the European continent in the later medieval centuries.[4][8] Because the islands had few grapes to make wine with, barley beer was used instead, resulting in the development of whisky.[7] In the Irish Annals of Clonmacnoise in 1405, the first written record of whisky attributes the death of a chieftain to "taking a surfeit of aqua vitae" at Christmas.[9] In Scotland, the first evidence of whisky production comes from an entry in the Exchequer Rolls for 1494 where malt is sent "To Friar John Cor, by order of the king, to make aquavitae", enough to make about 500 bottles.[10 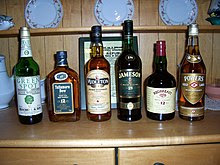 Irish whiskeys are normally distilled three times, Cooley Distillery being the exception as they also double distill.[32] Though traditionally distilled using pot stills, the column still is now used to produce grain whiskey for blends. By law, Irish whiskey must be produced in Ireland and aged in wooden casks for a period of no less than three years, although in practice it is usually three or four times that period.[33] Unpeated malt is almost always used, the main exception being Connemara Peated Malt whiskey.

Scotch whiskies are generally distilled twice, although some are distilled a third time and others even up to twenty times.[36] Scotch Whisky Regulations require anything bearing the label "Scotch" to be distilled in Scotland and matured for a minimum of three years in oak casks, among other, more specific criteria.[37] An age statement on the bottle, in the form of a number, must reflect the age of the youngest Scotch whisky used to produce that product. A whisky with an age statement is known as guaranteed age whisky.[38] Scotch whisky without an age statement may, by law, be as young as three years old.[39]

The basic types of Scotch are malt and grain, which are combined to create blends. Many, though not all, Scotch whiskies use peat smoke to treat their malt, giving Scotch its distinctive smoky flavour. Scotch malt whiskies are divided into five main regions: Highland, Lowland, Islay, Speyside and Campbeltown.

Finally there are good web sites that give you good explanations, here is one that explained it easily: