A group of people lost a large amount of money. There was one person in the group who was still happy, even though the others were miserable over their loss. The others asked him how he could be so happy while they were so sad.

He replied, "I'll give you an analogy. A person once came into a room where a few people were sleeping. The sleepers were dreaming nightmares and cried in their sleep. The person who was awake did not join them in their crying for he realized it was merely a dream. Similarly, I realize this world is like a dream. People upset over worldly matters are as in the midst of a nightmare. I am awake, and cognizant of how illusory worldly suffering really is."
Love Yehuda Lave 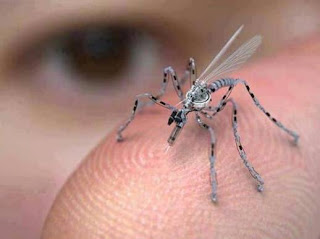 Is this a mosquito? No.
It's an insect spy drone for urban areas, already in production, funded by the US Government.
It can be remotely controlled and is equipped with a camera and a microphone.
It can land on you, and it may have the potential to take a DNA sample or leave RFID tracking nanotechnology on your skin.
It can fly through an open window, or it can attach to your clothing until you take it in your home.

A Black Day for American Jews