Personality traits are like raw material, intrinsically neutral. Classifying any particular trait as positive or negative changes according to the specific way it is employed by an individual in a given situation. If you utilize each trait in its proper time and place, then that trait is considered positive. But if you apply a trait when it is inappropriate, it is considered negative.

For example, the positive trait of "generosity" can actually be negative if it turns into smothering and stifling. On the other hand, the negative trait of anger can be positive when used to fight against evil and injustice 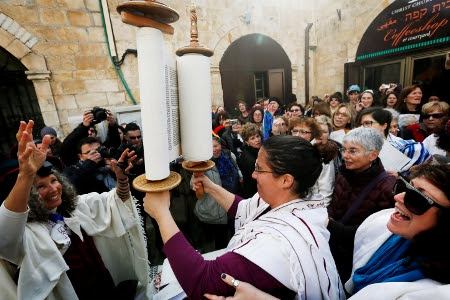 Women of the Wall hold Torah school in prayer outside Old City police station where others were detained for wearing prayer shawls at the Kotel February 11
Photo Credit: Miriam Alster/FLASH90

The rabbi of the Western Wall has promised Jewish Agency chairman Natan Sharansky that women will not arrested if they dare to say the mourners' "kaddish" prayer at the Western Wall.
The "Great Enlightenment" of Rabbi Shmuel Rabinowitz is the latest chapter in the saga of the Women of the Wall (WOW), whose movement – however suspect its motives might be – has exposed a total disconnect between Haredi rabbis' outlook and the Jewish world at-large.
The flak over the recital of the recital of the Kaddish prayer also has showed that Jerusalem police act on the orders of Rabbi Rabinowitz.
WOW plans to pray on next week's Holocaust Remembrance Day (Yom HaShoah) and on Rosh Chodesh at the Western Wall, which has a  partition to separate men and women according to the ancient custom practiced today even by non-Haredi orthodox communities.
But reciting the Kaddish? That also is too much for the Western Wall rabbi, who might be relying on the Haredi prohibition of a man God forbid, hearing a woman's voice and therefore losing his concentration on his prayers.
Jerusalem police commission Yossi Pariente wrote Anat Hoffman, chairman of WOW, "We would like to inform you that, starting on this coming Rosh Chodesh, the Israel Police will fulfill its duty to enforce the law."
The police previously have arrested women trying to pray in a minyan of 10 people on Rosh Chodesh, the first day of the new month. The women's group has drawn worldwide publicity by wearing prayer shawls and trying to carry a Torah scroll to the Western Wall, in violation of a High Court order.
There is a solid foundation of rabbinic laws against the women's monthly attraction, which understandably is seen as a provocation by Israeli Jews, even those who are not Haredi or even not orthodox.
But the altercations of the police and the scenes of a Jew being arrested for holding a Torah scroll have played into the hands of the WOW movement and have indeed been a provocation – provoking more hatred of rabbinic authority.
The motives of the Women of the Wall are more than just reciting prayers or reading from a Torah scroll. They openly campaign against what they call a "monopoly" of Orthodox Judaism, which has been around for 3,500 years, leaving open the question of how tolerant women and Reform Jewish leaders would be of Haredi demands if they were to be in authority.
Instead of dealing with the challenge in a 21st fashion – perhaps sitting down with the women  and learning with them the Talmudic  views that actually promote many aspects of modern feminism – the Haredi community has chosen measures that conjure up horrid visions of centuries of non-Jewish rules' disgust of Jews and Judaism.
"Prohibiting women from saying Kaddish is a shanda (Yiddish for shameful) and brought on solely by the hegemony and short-sightedness of Rabbi Rabinowitz," said Hoffman in response to the letter Jerusalem Police Chief Pariente. "He has, without a doubt, crossed a clear red line, as women's right to say Kaddish is respected and accepted by the entire Jewish world, including Orthodox factions…
"To refuse mothers and mourning women the right and obligation of saying the mourner's prayer, Kaddish, is cold-hearted. Women of the Wall will be at the Kotel and will say Kaddish, with the utmost religious intention and emotional commitment that is deserved and require of us."
The issue has become so emotional that there is almost no room for any logical or knowledgeable input. American Jewish journalists and non-Orthodox Jewish leaders, often without any understanding of Jewish law, have jumped on the harassment of women to show Judaism as Medieval and allegedly anti-feminist.
One of the most recent examples is Peter Beinart's Open Zion blog on the Daily Beast.
He posted an article by Emily Hauser, who has made herself one of thousands of modern "commentators" on the Torah. She titled one recent article, "Moses was a jerk, & Passover wouldn't have happened without five women."
Hauser exploited Pariente's letter to promote populism whereby everyone is a religious authority. The "Israel's government is telling the world's Jews that they know what Judaism is, and we don't," she wrote.
Prime Minister Binyamin Netanyahu belated turned to Sharansky several months ago to solve the problem of WOW's demands and the Western Wall rabbi's refusal to listen, and he is in the final stages of drafting recommendations to decrease tensions.
Last month, three female Knesset members joined the Women of the Wall for the monthly Rosh Chodesh prayer, and police, for the first time, did not break up the prayer service.