Appreciate All You Have


Try imagining your life without all that you presently have. If you can master this ability, then you will appreciate what you do have to such a degree that you will live a life of constant joy.

If you were lost in a wilderness without food and water - and then found some bread, you would enjoy that bread more than the most sumptuous meal! Rabbi Simcha Zissel of Kelm wrote that he personally had such an experience, and it was like living in paradise. You will always be able to feel that joy if you use your mind wisely.

Today, spend a few moments imagining what it would be like if you had absolutely nothing: no family, no friends, no possessions, no money at all, no knowledge, no eyes, ears, hands, feet - absolutely nothing. Continue this exercise until you actually feel it.
Then do the second half of this meditation and learn to appreciate what you do have.
Love Yehuda Lave 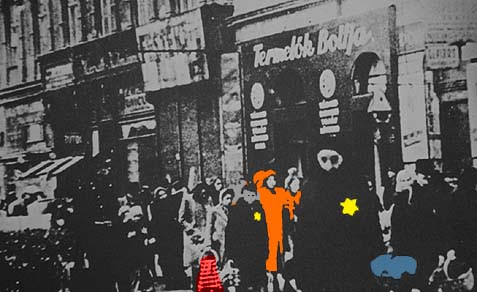 The ultimate Jewish response to the Holocaust is summarized by the verse: "For My thoughts are not your thoughts, neither are your ways My ways, says God. As the heavens are higher than the earth, so are my ways higher than your ways and my thoughts than your thoughts" (Isaiah 55:8-9), which Maimonides relies on in his Laws of Repent (5:5): "Man is incapable of perceiving the Creator's ideas, as the prophet said, "for My thoughts are not your thoughts nor your ways My ways."
Nevertheless, we accept the notion that God does not base His world on chance. The hand of God is involved in history. No one is claiming to be thinking God's thoughts and conducting the divine bookkeeping, but we were brought up believing that troubles don't befall a person by accident, even when they don't understand it. Everything is a sign from Heaven, including the worst state of "hester panim," the obscuring of God's face, in total chaos, in the trampling of Jewish honor and the humiliation of the Torah of Israel.
It would be extremely difficult to suggest that the catastrophe that befell our entire nation – Ashkenazim and Sephardim; Eastern and Western Europeans and North Africans; Torah scholars, sworn heretics and the completely assimilated; Hasidim and Misnagdim; day old babies and the elderly; Capitalists and Communists; the educated and the ignorant – absolutely every strata of the nation – was an accident.
In extremely Haredi circles, those madmen who travel to Tehran to embrace the enemy Ahmajinedad, there are no doubts regarding God's message: the Holocaust happened because of the creation and the existence of the Zionist movement, whose heavy sin is the breaking of the "three vows."
According to tractate Ketubot 111a, when the Jews went into the second exile, in the year 70, three vows were taken by them and by God: the Jews would not conquer the land of Israel by force, they would not rebel against the nations of the world, and the non­Jews would not oppress the Jews too much (yoter midai).
That was the view of the Satmar Rebbe, Rabbi Joel Teitelbaum (who, ironically enough, was saved from death in the Holocaust by Hungarian Zionist official Rudolph Kastner, who made a deal with a deputy of Adolf Eichmann)
In his book, "Va'Yoel Moshe," Rabbi Teitelbaum argues that even if all the citizens of Israel were adhering to all the commandments, totally righteous, if all the government ministers wore shtreimlach, settling the land of Israel would still constitute the breaking of those vows.

WRITTEN IN AN ATTIC
It's easy to write such delusional things when you're sitting in New York City, which protects even the rights of crackpots. It was much harder to comment on the same topic from the darkness of a hiding place in an attic in Budapest, Hungary, while Nazi thugs were hunting down the last remaining hidden Jews of the city.
Rabbi Yisachar Shlomo Teichtal (1885-1945), an extremist Haredi who was close to the Satmar circles, was watching the Gestapo hunters through a narrow crack in his hidden attic, and, through a spiritual and physical review of his terrifyingly lowly reality, reached a brave conclusion: it was the erroneous concept typical of his Haredi pals regarding the resettlement of Eretz Israel that had brought on us those cruel tortures and grotesque deaths.
Rabbi Teichtal began his rabbinic path with an adherence to the philosophy that was common to most Hungarian rabbis: everything new was forbidden by the Torah, including aliyah to Eretz Israel, and certainly coalescing with the secular Zionists to rebuild the land. But following the horrors his eyes had seen, he changed his views 180 degrees. After reexamining his own beliefs, he investigated the issues regarding resettling the land of Israel and natural redemption ("geula b'derech ha'teva), and reached the conclusion that the reason for the Holocaust was that the nation of Israel was called by God to ascend to Eretz Israel, but because it had fallen in love with life in the diaspora it turned its back on Eretz Israel.
He wrote his conclusions while in hiding in his dark attic in Budapest. His books were not with him, and so he had to cite from memory thousands of Torah sources supporting his new position. Unfortunately, the brutes finally reached him, too, and sent him to his death. He was murdered on a transport train during the final days of World War II. But his writing became the monumental, 500-page sefer Eim HaBanim Semeichah – Eretz Yisrael, Redemption and Unity.
He wrote:


The Purpose of our Affliction Is to Arouse Us to Return to Eretz Yisrael
…The sole purpose of all the afflictions that smite us in our exile is to arouse us to return to our Holy Land. This can be inferred from the story of King David and the plague. During the plague, God sent him Gad the prophet. And God came to david…and said to him, "Go up and establish an altar to the Lord" (II Samuel 24:18). The Misrash explains:
This can be likened to a father who beat his son, but the son did not know why he was being punished. After the beating, the father said, "For several days I have been commanding you to do something and you have ignored me. Now go and do it." So, too, the thousands who fell at the time of David died only because they did not demand the building of the beit haMikdash. From this we can derive a kal vachomer (an a fortiori inference). If they, in whose days the Beit HaMikdash was neither built nor destroyed, were punished for not having demanded its construction; then we, in whose days the Beit HaMikdash was destroyed … certainly [deserve punishment], for we do not mourn nor supplicate (Midrash Tehillim 17).
Rashi on Hoshea (3:5) cites the following:
R. Shimon ben Menassiya said: "The Jewish people will not be shown a good sign until they once again request the kingdom of Heaven, the kingdom of the House of David, and the rebuilding of the Beit HaMikdash. It is thus written, Afterwards, the Children of Israel will return and seek out the Lord their God and David their king (Hoshea 3:5).
Behold, our desire to return to Eretz Israel encompasses these three elements. Firstly, "He who dwells in Eretz Israel is like one who has a God" (Ketubot 110b). Also, the rebuilding of the Beit HaMikdash will occur (with God's help) when we assemble in Eretz Israel, as explained in Megillah 17b-18a. Afterwards, Mashiach, who represents the kingdom of the House of David, will arrive, as I will demonstrate in this volume. First and foremost, though, we must strive to return to Eretz Israel and then, with God's help, we will attain these three objectives.

Rabbi Teichtal wrote his piercing words literally during the Holocaust. But he was preceded by many gedolim, who warned of the approaching Holocaust, years before it began. The great Meir Simcha Ha'Cohen of Dvinsk (1843–1926), author of the Ohr Somayach, ruled that the "three vows" were nullified by the San Remo Conference of 1920, empowering Great Britain to put into effect the 1917 Balfour Declaration to the establishment in Palestine of a national home for the Jewish people.
The latter warned, 25 years before the Holocaust, that the day would come, in which "the Israelite [in diaspora] will forget his origins and be counted as citizen [of the world]… Will think that Berlin is Jerusalem… Then a stormy wind will come, uproot him and subject him before a faraway gentile nation." (Meshech Chochma, Vayikra 26).
The nation of Israel preferred, sadly, life in diaspora over the promised land, and paid for it an unbearable price. This excessive affection for diaspora was expressed in this popular Jewish joke: One day a Jewish villager comes home and tells his wife that the Rabbi in shul was saying that when Moshiach comes, he will lead all the Jews to Eretz Israel. So his wife becomes very upset, asking what would they do with all their barnyard animals.
We'll leave them to the Cossacks, says her husband.
Well, if God likes us so much, he should let us stay here and take the Cossacks to Eretz Israel, says his wife.
Much like those two fools, the nation of Israel chose to remain spread among the nations, for which we were sentenced to a reeducation camp the likes of which we will never forget.