Sadness is a negative trait because at the root of sadness is selfishness. Feelings of sadness come from thinking too much about oneself. A sad person thinks: "I should have more than I do. I am missing a lot."

A person who thinks this way should realize that there is no reason why things should be any different than they are (although he would like them to be). That will make it much easier to accept reality.

If something can be changed, try to change it for the better. If it cannot be changed, demanding that things be different makes you needlessly unhappy.

No holds barred: Israel is being crucified by unchallenged lies

Israel made the same mistake of believing, for decades, that all the lies told about them would not be believed. 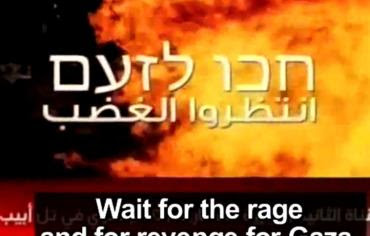 Hamas propaganda video Photo: screenshot
I recently received an email from a reporter asking me to comment on questions of the "when did you stop beating your wife" variety. I receive these near daily from anti-Israel and anti-Semitic publications who accuse me of everything from supporting genocide against Palestinians, to lending my name to African regimes that slaughter their people (they're referring to my friend President Paul Kagame, who actually stopped the genocide in Rwanda in 1994), to abandoning Michael Jackson. But this one came from a Jewish publication and included these gems: Do I disappear for days, sometimes weeks, into a room where I cry on the floor and then work for 23 hours a day? Did I turn my Chabad house in Oxford into a vehicle for self-promotion and self-advancement and basically become an impresario by using the prestige of Oxford to attract celebrity speakers? Is my new book Kosher Lust not a violation of Jewish teachings of modesty, and doesn't its emphasis on lust over love denigrate women by making them objects of male desire?

It did not surprise me that the questions came from a reporter who was raised Orthodox, abandoned it, and has family members who are vehement public critics of Jewish practice. Those who leave Jewish observance often spend a great deal of their lives having to justify their rejection of a religion which, they claim, is too insular, narrow and backward to allow adherents to live a fully modern life. As someone who lives a public life as an Orthodox Jew in the secular world, I am a favorite target of those who need to prove that it's impossible. My very existence irks them. I have no right to be a representative of Judaism in the media given that my yarmulke and beard capture the primitive, antiquated side of Judaism from which they, with all their sophistication, have "graduated."

But the point I want to make is not just the well-known one that Jews are their own worst enemies, but this: When articles like these are written, my friends say to me, no-one will believe this garbage. Don't respond. Everyone will see it as a twisted, sociopathic character assault motivated by a reporter's deeply personal and psychological issues with their Jewishness and upbringing.

As I write these words, Israel is engaged in a ground assault in Gaza against Hamas in which too many of its righteous soldiers have already fallen. Rather than the world showing sympathy for a tiny democracy that invaded the giant terrorist cell that is Gaza to stop rockets being fired at schools, world media is largely portraying Israel as the aggressor who is cavalier and callous about Palestinian lives.

I'll tell you why. Because Israel made the same mistake of believing, for decades, that all the lies told about them would not be believed. The Jewish state treated as beneath contempt the falsehoods that Israel poisons the water of Palestinian children (an accusation made by Suha Arafat in the presence of Hillary Clinton), introduces AIDS to kill off Palestinians, bombs Arab children indiscriminately, steals Palestinian land without compensation, has no historical claim to ancient Israel, humiliates Palestinians at military checkpoints for merely racist reasons, and built a wall that has made the West Bank into the Warsaw Ghetto. Israel never felt the need to respond to any of this drivel because it thought the truth of its righteousness and respect for human rights was self-evident.

Countless Jews died because of these lies. Only now are we learning that each and every one must be responded to.

Of course, the venue where one chooses to respond matters. Dignifying a malicious story with a response in an irredeemably hostile publication will only give it credibility it does not deserve. This is especially true when the media outlet in question is driven by hatred, irrational bias, and wants to simply do a hit piece. Holocaust denial, for instance, must be responded to. But not in neo-Nazi publications. Lies about Israel must be addressed. But much more effectively in The Wall Street Journal than The New York Times, The Washington Post than The Guardian, The Los Angeles Times than Al Jazeera, even though these more hostile outlets cannot be ignored and must be addressed – the New York Times especially.

As to the charge of self-promotion, well, my name is on this column, right? But whatever my imperfections, I have never veered from my mission – to promote the universal teachings of Judaism and make our people a light unto the nations – not now, not ever.

Soft lies that are not responded to slowly become hardened truths.

It's a lesson that Israel must finally learn.

The writer is the international best-selling author of 30 books and Founder of This World: The Values Network. He is the recipient of the American Jewish Press Association's Highest Award for Excellence in Commentary and won the London Times Preacher of the Year competition. He has just published Kosher Lust. Follow him on Twitter @RabbiShmuley.

All: For those of you who are car buffs or just like the old Hollywood!  Enjoy.

Actors And Their Automobiles

For those who appreciate old, classic automobiles

FATTY ARBUCKLE AND HIS 1919 PIERCE ARROW

ERICH VON STROHEIM AND HIS CADILLAC

HAROLD LLOYD AND WIFE MILDRED DAVIS WITH THEIR BUICK

BABE RUTH RECEIVING A 1926 AUBURN ROADSTER AS A GIFT

LILLIAN HARVEY AND HER MERCEDES

JOHNNY WEISSMULLER WITH HIS 1932 CHEVROLET

CLARK GABLE WITH HIS 1932 PACKARD

CARL BRISSON BEHIND THE WHEEL OF HIS 1934 ISOTTA FRASCHINI

AL JOLSON WITH HIS MERCEDES

JEAN HARLOW WITH HER CADILLAC

BUCK JONES WITH HIS 1933 PACKARD SPECIAL

TYRONE POWER WITH HIS DUESENBERG

JAMES "JIMMY" STEWART WITH HIS PLYMOUTH

GINGER ROGERS AND HER 1937 DODGE

RITA HAYWORTH WITH HER 1941 LINCOLN CONTINENTAL

CARY GRANT PARKED ON THE FENDER OF HIS 1941 BUICK CENTURY

JOHN WAYNE AND MAUREEN O'HARA IN A 1914 STUTZ BEARCAT

Sheep to the Slaughter?

I cannot fathom how 6 million Jews died in the Holocaust. Can you explain why so many people wouldn't fight for their life? They all heard the stories and some even managed to relay first-hand what they themselves had seen. I understand that many put their trust in God, but after so many bad things continued to happen, why not try to protect yourself? It seems that many people died because they believed that nothing bad could happen to God's chosen people and that "works makes one free!"

Can you help me understand how all this happened?


Regarding the issue of why the Jews did not rise to action, let us clarify:

1) Did any other group persecuted by the Nazis successfully rebel? Every group followed the Nazi's beck and call. Some of these groups even had weapons, unlike the Jews who were civilians (many women and children) and untrained in combat. By the end of the war, a few million Russian POW's had been killed by the Nazis. Why didn't these soldiers resist?

2) How could Jews rebel, knowing that any infraction of Nazi law was punished with the torture and murder of hundreds of other Jews in retribution. Who could risk that?

3) In truth, there were incidents of Jewish rebellion all over Europe. The famous examples were in the Warsaw ghetto and the death camp of Treblinka, where the inmates revolted and destroyed the camp. The few dozen survivors of Treblinka (of the 750,000 who entered) lived to testify against Eichmann in Jerusalem. There were also groups of Jewish partisans hiding out in practically every forest in Europe. They often had to fend off not only the Nazis but their former friends and neighbors as well.

A survivor of Auschwitz, Edith Reifer, writes in The Sun Will Rise (ArtScroll):

"This familiar accusation – that we were led to our deaths like sheep – makes me want to weep. We had no weapons, we were not organized. We had undergone months, in some cases years, of ghetto life, starvation, brutalization, terror, uncertainty. And they were so clever, so diabolically clever. The concealment lasted up until the very last moment. We knew that death was their ultimate intention for us. But the gas chambers were disguised to look like shower rooms? Notices, in many European languages, exhorted the victims to hang up their clothes, tie their shoes neatly in pairs, as they would need them afterwards. It was only once inside that they realized...

"The nauseous, sickly-sweet smell, which we later knew to be 'death,' hung over the camp like a pall. It was with you every waking moment, and settled over you as you slept. We all saw the black vans, the flames, although we tried to convince ourselves that it was rubbish they were burning. The fact is that this truth was always known to us, but there is a certain safety device which will not allow one to internalize 'too' much of the truth. It is this that keeps one alive."

One final idea: Ingrained in Jewish consciousness is the knowledge that we will survive against all odds. This trait leads to optimism that the situation will improve and a disbelief of such tragic reports as the existence of "death camps." This consciousness may mean that less risks were taken. But it also enabled many to hold tenaciously to their will to live – when others may have given up.

The whole argument is designed to turn the tables and make the Jews to blame for their own fate in the Holocaust. It is a great dishonor to the memory of the Six Million. In the end, given the choice between being a Holocaust victim or being a Nazi, I know what I would pick.

Hamas: Our Aim is the Extermination of the Jews - Middle East - News - Arutz Sheva

a little joke to lighten the mood:
\

A Jewish man was in a supermarket in Thornhill, Ontario.
He saw a black woman trying to get her young child to put down a candy bar he had picked off the shelf.

"Latrell, you put that down! It's not kosher'."

Intrigued, the young man decided to investigate. "Excuse me, ma'am, are you Jewish?"

"'Why? I'll tell you why. 'Cuz I see all them Jewish mothers saying that to their kids – and it works for them!"