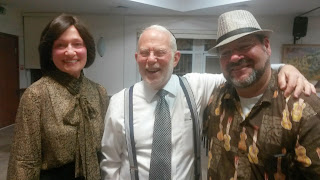 An Hour of Gratitude

There is a powerful exercise that will greatly help you upgrade your level of gratitude. Designate an hour a day to be your hour of gratitude. During this hour keep your focus on gratitude.

Isn't an hour a long time to do this? Yes, it is. When you actually do this exercise for a month, you will find the benefits so great that you will make the effort to keep it up for an hour a day tremendously worthwhile.

And what about spending an hour a day focusing and thinking about what you don't like, what you are unhappy about, what you are resentful about, what you are envious of, what you find frustrating, what's not happening that you want to happen, what might go wrong in the future (also known as worrying), what has already gone wrong in the past. Isn't an hour a long time to spend on thinking these thoughts? Yes, it is. And many people would find it a great blessing to only think these thoughts for just one hour a day and the rest of the day to think more pleasant and enjoyable and beneficial and growth-oriented thoughts. Making a resolution to designate an hour a day reserved for thoughts of gratitude will make it easier for you to overcome a tendency to think thoughts that create stress and distress.

"But I don't have that many things to be grateful for," some people might argue. "You would be surprised!" is the answer. Try it out and you will find that you have much more to be grateful for than you usually are aware of.

If you meet someone you know, be grateful that you have people who are friendly towards you.

If the telephone rings, be grateful that you can hear.

If you see anything, be grateful that you can see.

If you have food to eat, be grateful for that food.

If you read something, be grateful that your brain is functioning and you know how to read.

If you smile to yourself in a mirror, be grateful that you have the positive feedback that will help you master positive states.

If you begin to feel irritated or upset over something and remember that this is your hour of gratitude, be grateful that your memory is working and that you have things to be grateful for and that you can access a gratitude state rather than an unpleasant one.

If someone else needlessly makes a negative comment, you can say, "This is my hour of gratitude, and I would be very grateful to you if you could point out some things we can be grateful for during this hour." You could also combine this hour with your prayer so you can get two things done with one hour.

Even though most people stayed home last night, I was grateful to go to the Israel Center to see my old friends (only in the fact they have old souls), the Neubergers give a talk about the messionic times we must be in with the building of the third temple.

You are part of the ongoing story of the Spiritual People: (intense to watch)

On July 4, 1976, as America was celebrating its bicentennial, Israeli commandos performed a spectacular raid to rescue 100 Jews held hostage at Entebbe airport in Uganda. One week earlier, an Air France flight was hijacked by Palestinian terrorists, who landed the plane in Uganda with the support of dictator Idi Amin. The terrorists threatened to kill the Jewish hostages if the Israeli government did not release convicted Palestinian terrorists. (Amazingly, the flight crew all voluntarily chose to stay with the Jewish captives rather than be released; upon their return to Paris, they were reprimanded by Air France executives and temporarily suspended from duty.) The government of Israel refused to negotiate with the terrorists, and quickly planned a rescue mission. Conveniently, Israel had the blueprints for the building in which the hostages were held -- it was built by an Israeli construction firm. Two hundred Israeli soldiers were flown to Entebbe; they brought along a black Mercedes disguised to look like Idi Amin's personal car. The raid took a total of 58 minutes, in which all the terrorists were killed, and all but three of the hostages were safely rescued. The raid, dubbed Operation Thunderbolt, was subsequently renamed Operation Yonatan -- after Col. Yonatan Netanyahu (brother of Israeli Prime Minister Bibi Netanyahu), the leader of the raid, and the only Israeli soldier killed.

In 1938, U.S. President Franklin D. Roosevelt initiated a conference at Evian, France, where 32 world leaders discussed the problem of Jewish refugees. Unfortunately, little was accomplished, as nation after nation offered excuses for their refusal to accept Jewish refugees. Chaim Weizmann was quoted as saying: "The world seemed to be divided into two parts -- those places where the Jews could not live, and those where they could not enter." The conference failed to pass even a resolution condemning German treatment of Jews. The lack of action further emboldened Hitler, proving to him that no country had the moral fortitude to oppose the Nazi assault on European Jewry. 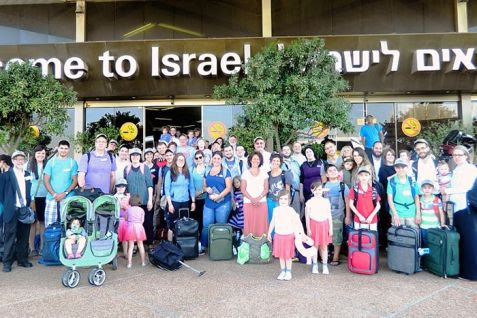 The youngest immigrant is an eight-month-old baby while the oldest, Lottie Herman, is 92. Herman who fled Germany in 1939 to America, will be settling in Jerusalem.

Among the other olim who arrived this morning was Becky Kupchan, 26, from Chicago. Kupchan will be moving to Beer Sheva, the capital city of Southern Israel.

"Although the security situation in Israel is very tense right now, and in Beer Sheva where I'm about to move rockets are falling, I am not afraid and I trust the Israeli government and the IDF," said Kupchan, after she arrived at Ben-Gurion Airport. "I'm a Jew and I've always dreamed about making Aliyah to Israel, my home — and at home you always feel safe."

"The Olim who've chosen to make Aliya to Israel during these challenging days are real heroes, and each one of them fills our heart with pride and great inspiration," said Rabbi Yehoshua Fass, Co-Founder and Executive Director of Nefesh B'Nefesh. "Becky from Chicago, who has chosen to live in the city of Beer Sheva in the South, is one of them and we will do whatever we can to assist her in her new home in the State of Israel."

The aliyah of Tuesday's group was made in partnership with the Ministry of Aliyah and Immigrant Absorption, the Jewish Agency for Israel, KKL and JNF-USA, and Nefesh B'Nefesh.

According to Nefesh B'Nefesh 97% of its olim have remained in Israel thanks to its support programs and comprehensive social services to more than 38,000 newcomers. 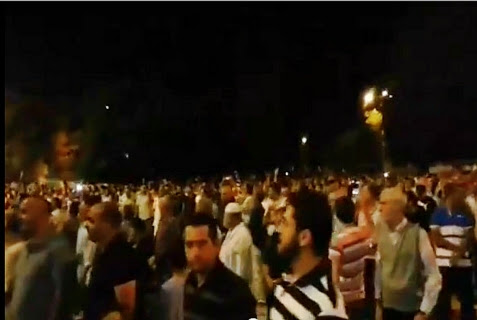 Hundreds of Arabs gathering on the Temple Mount cheering that a rocket launched by Hamas in the Gaza Strip has hit Jerusalem.

Odd that there would be such celebration when Jerusalem is claimed to be such a holy site for Muslims.