If you get insulted, ask yourself, "What underlying factors are motivating this person to insult me?" Regardless of the words the person is using, the underlying message is that he is frustrated or discouraged. Try to react towards him in the context of his underlying problems and not his actual words.

Subject: The Story Of A Photo (Absolutely Shocking)


Very graphic photos.  Don't scroll beyond text if you don't want to see images.
The Story Of A Photo
This is the Israeli Fogel family that was brutally murdered by Palestinian terrorists a few years ago as they slept in their home, and now the Hamas is circulating this picture claiming that this is a Gaza family murdered by Israeli soldiers.

This is simply unbelievable. Nobody in the Hamas noticed, but there is a Jewish Mezuzah on the door post! (See the insert in the bottom central part of the photo.  The Mezuzah is white and is on the right side).

Just when you thought they could not get any lower: 'Palestinians' using Fogel family murder pics for propaganda 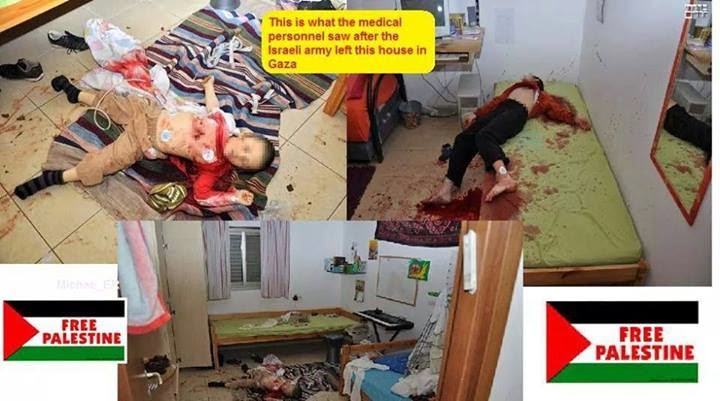 =August 12, 2014
Mainstream media wakes only when Israel fights back

Perhaps as many as 500,000 people have been killed and some two million more driven from their homes since 2003.

Are we talking about Gaza? No, it is Darfur and the victims were black Christians and animists in southern Sudan. The culprit? The Arab Islamist government in Khartoum. But where were the street protests throughout Europe against the Islamists? There were none, because the victims were not the Arabs who call themselves Palestinians.

What of the Sri Lankan War in which up to 70,000 people died from 1983 until 2009. Most people were completely unaware of this long and harrowing war. Do you remember seeing street demonstrations or lurid pictures flashing across your TV screens? The answer was no because they were not Palestinians.

How about the war in the Republic of Congo where since 1997 almost 5,500,000 people have perished? No knowledge of it? Well that's because they weren't Palestinians. Then there's the Somali civil war, which accounted for 500,000 dead since 1988. Oh, let's not forget, they also were not Palestinians. And before I move on, there's the Mexican drug war in which nearly 8,000 have died since it began in 2006. But we can also ignore that one because they are not Palestinians. Oh, and by the way, some of these wars still rage on.

Other wars include the Second Chechen war with up to 90,000 dead; the Islamic insurgency in the Philippines with 160,000 casualties; an ethnic conflict in Nagaland with the loss of 43,000 lives; the Turkish – Kurdish struggle with 40,000 dead and wounded, and the Iraqi slaughter of Kurds numbering as many as 180,000. Remember the gassing of the Kurds by Saddam Hussein?

There are too many others to name but you won't hear much about them because – well, yes you guessed it – they were not about those Arabs who call themselves Palestinians.

Over 180,000 people slaughtered in Syria, over 200,000 put to death in Iraq and the barbaric murders continuing with beheadings and crucifixions – and who knows what else – as Muslims kill fellow Muslims while Muslims kill Christians and the world and its media mostly slumbers.

But then the Palestinians murder three Israeli teenagers and launch a pre-meditated barrage of lethal missiles upon Israeli civilians from Hamas occupied Gaza. Still most of the international and mainstream media slumber on. But then, saints alive, the Jews fight back and retaliate against the Palestinian Hamas thugs.

Then the morally compromised media wakes up, its reporters swarm all over Gaza like so many maggots, spewing falsehoods that they dutifully receive from their Hamas minders and the world's TV screens flicker with images designed to demonize the victim: Israel.

Only after the same reporters have left Gaza do they ruefully admit that they could not report the truth of what really was happening for fear of being killed by the Hamas gunmen, but by then the damage to Israel's image was done. Indeed, reporters also admitted that if they even had pointed their cameras towards Hamas terrorists they would immediately have been shot to death.

That is why you never saw Hamas terrorists on the nightly news and only heard that women and children were killed. That is why none of the reporters, while still under Hamas manipulation, ever told you of how many terrorist were killed. The reality is that well over 1,000 Hamas gunmen were in fact killed and most civilians were Hamas human shields or killed by Hamas missiles falling short and striking Palestinians inside Gaza.

Did you hear that over 160 Palestinian children died while forced to build tunnels for Hamas? Have you heard that now even those surviving tunnel diggers who were paid to do the work of Hamas have been executed for fear they will tell the world of what has been going on. You probably have not been told that by the mainstream media.

But before the latest Gaza war, did you hear that during the last nine years, since Israel in 2005 left behind a thriving agricultural infrastructure for the Arabs to embrace and for them to prove that they were genuinely interested in living side by side in peace with Israel, that 15,000 Palestinian missiles have been fired by Hamas and other terror organizations at Israeli villagers and townsfolk from the Gaza Strip? Probably not, because the victims were Israelis not Palestinians.

That's because the suffering population is in southern Israel, not among the Palestinians. But consider this. As soon as Israel could no longer endure the Palestinian aggression and finally retaliated, the world strangely woke up and ended its deafening silence.

Predictably the United Nations, orchestrated by the 50 or more members of the Islamic Bloc and, as always, supported by the enfeebled and hypocritical European Union, now fast sliding down into the vile pit called Eurabia, became stridently vocal with condemnations not of Hamas, with its bloodthirsty calls for Israel's destruction, but of the long suffering Israelis for daring to defend themselves.

How odd that there were no official condemnations of the Hamas regime in Gaza by the U.N. while thousands of Palestinian rockets and mortars were raining down on Israel for years in a gigantic act of premeditated and murderous terror.

Perhaps it is because we have found out that the UN, through UNWRA, aids and abets the Hamas thugdom, helping to poison the children's minds with the vile teachings of the Muslim Brotherhood and anti-Jewish Koranic passages while all the time storing Hamas missiles within UN buildings.

Sadly, it is all symptomatic of much of the world's hypocrisy, pro-Palestinian bias, and dislike of the Jewish state. The world hated the stateless Jews and now hates the State of the Jews.

Israeli civilians can die and be maimed for as long as it takes; but not Palestinians, even as Hamas uses the hapless civilians in Gaza as human shields – an indefensible war crime.