"How do I change the focus of my brain?" is a common question that people ask. "I tend to think of the negative. I worry a lot. My brain focuses way too much on thoughts that aren't conducive to happiness. How can I stop thinking about what I don't want to think about?"

A powerful tool that will help your brain move to the type of thoughts that you wish for is to tell it: "NEXT!" Then your brain will joyfully move on to another picture, idea, song, series of words, thoughts, imaginary scenes, visualizations, and anything else that brains like to do. Your brain can choose from an enormous amount of material that it already has stored in its immense library.

The World's most expensive RV.
https://autos.yahoo.com/news/world-most-expensive-rv-sold-dubai-w-video-160010714.html 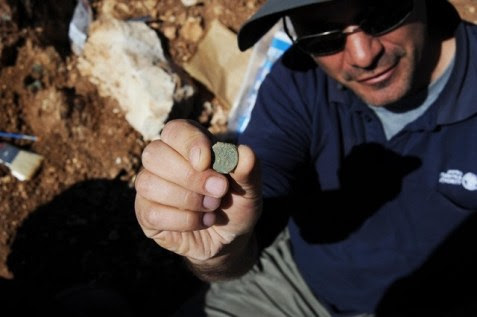 Pablo Betzer, IAA District Archaeologist for Judah, with a coin from the Year Four of the Great Revolt.Ancient Money Box from Second Temple Era Discovered near the Jerusalem–Tel Aviv Highway.
Photo Credit: Vladimir Niihin, courtesy of the Israel Antiquities Authority

Pottery sherds, or fragments, discovered by an Israel Antiquities Authority inspector several months ago, during extensive work by the Netivei Israel – National Transport Infrastructure Company, Ltd. on the new Highway 1 project resulted in an archaeological excavation. A previously unknown settlement from the Late Second Temple period was discovered, as well as a rare hoard of coins that was found in one of its houses along the new highway connecting Jerusalem and Tel Aviv. The hoard, which was kept in a ceramic money box, included 114 bronze coins dating to the Year Four of the Great Revolt against the Romans. This revolt led to the destruction of the Temple on Tisha B'Av (the ninth day of the Hebrew month of Av), 2,000 years ago.

"One of the significant points of the find is that all the coins were all dated to the same year and each have the same worth," Pablo Betzer, one of the excavation directors of the Israel antiquities Authority told Tazpit News Agency. "The location of the find is also significant as it was found outside Jerusalem."

According to Betzer and Eyal Marco, the other excavation director on behalf of the Israel Antiquities Authority, the hoard appeared to have been buried several months prior to the fall of Jerusalem. "It provides us a glimpse into the lives of Jews living on the outskirts of Jerusalem at the end of the rebellion."

"Evidently someone here feared the end was approaching – perhaps he could see the advancing Roman army and did not want to take a chance. He hid his property in the hope of collecting it later when calm was restored to the region," Betzer told Tazpit. 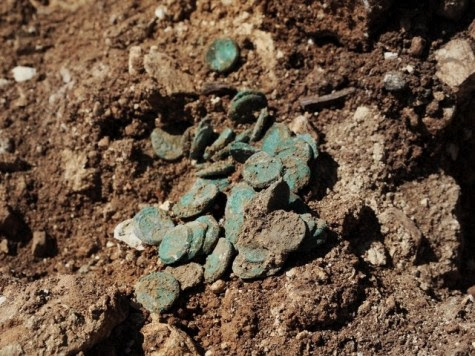 The hoard as it was found in the excavation.

The hoard was concealed in the corner of a room, perhaps inside a wall niche or buried in the floor and was discovered after three weeks of digs in the area. Two other rooms and a courtyard belonging to the same building were exposed during the course of the archaeological excavation. The structure was built in the first century BCE and was destroyed in 69 or 70 CE when the Romans were suppressing the Great Revolt. Early in the second century CE part of the building was reinhabited for a brief period, which culminated in the destruction of the Jewish settlement in Judea as a result of the Bar Kokhba rebellion. This is attested to by three complete jars that were discovered embedded in the courtyard floor.

It seems that the residents of this village, like most of the Jewish villages in Judea, were active participants in both of the major uprisings against the Romans – the Great Revolt and the Bar Kokhba Revolt. As a result of their involvement the place was destroyed twice, and was not resettled.

The Israel Antiquities Authority and Netivei Israel Company are examining the possibility of preserving the village remains within the framework of the landscape development alongside the highway.

Protocols of the Elders of Hamas

Hamas has only bombs, tunnels and rockets to show for the billions funneled to it in international aid. 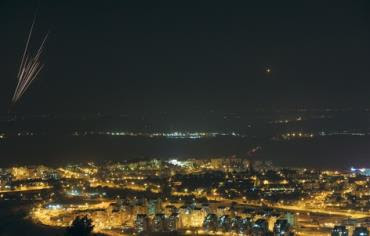 Rockets fired by Hamas from Gaza fly over Israel, July 8, 2014. Photo: JERUSALEM POST
I was at the UN Security Council hearing on the war in Gaza on Thursday as a guest of Ambassador Eugene Gasana of Rwanda, who held the Security Council presidency through July. I heard the regular condemnations of Israel for being indifferent to the murder of children.

Secretary General Ban Ki-moon said that there could be nothing more shameful than Israel killing children while they slept at a UN school that Israel targeted. The UN Commissioner for Human Rights Navi Pillay went further and said that Israel deliberately targeted civilians.

That's quite an accusation. And she better be right.

Because if she's wrong, she is guilty of yet another blood libel against the Jewish people.

The facts, of course, are otherwise. To Hamas Palestinian children are nothing but bullet-proof vests to be donned by cowardly terrorists, and human missile silos to protect their rockets. Hamas is a genocidal terrorist organization whose murderous charter calls for the annihilation of the Jewish people wherever they may be found.

Some of the charter's highlights include this humanitarian gem: "Israel will exist and will continue to exist until Islam will obliterate it, just as it obliterated others before it."

But wait, the charter is just getting started. It continues, "Our struggle against the Jews is very great and very serious.

It needs all sincere efforts... until the enemy is vanquished and Allah's victory is realized." For "vanquished," read "destroyed." The charter is clear that Hamas "strives to raise the banner of Allah over every inch of Palestine."

Not much room for Israel.

And it is absolutely genocidal in nature: "The Day of Judgment will not come about until Muslims fight the Jews (killing the Jews), when the Jew will hide behind stones and trees. The stones and trees will say, 'O Muslims, O Abdulla, there is a Jew behind me, come and kill him.'" The charter rejects any and all attempts at peace with Israel: "Initiatives, and so-called peaceful solutions and international conferences, are in contradiction to the principles of the Islamic Resistance Movement."

The charter is also deeply militaristic: "There is no solution for the Palestinian question except through jihad.

Initiatives, proposals and international conferences are all a waste of time and vain endeavors."

Holy war to the death is the only solution: "In face of the Jews' usurpation of Palestine, it is compulsory that the banner of jihad be raised."

The charter is also deeply paranoid, buying into a Protocols of Zion-like belief that the Jews control the world and are responsible for "Freemasons, Rotary Clubs, espionage groups and others, which are all nothing more than cells of subversion and saboteurs... for the purpose of achieving the Zionist goals and deepening the concepts that would serve the enemy."

The Jews are insatiable: "The Zionist plan is limitless.

After Palestine, the Zionists aspire to expand from the Nile to the Euphrates. When they will have digested the region they overtook, they will aspire to further expansion."

The Jews want to take over the world and control everything: "Their plan is embodied in the "Protocols of the Elders of Zion... For a long time, the enemies have been planning, skillfully and with precision, for the achievement of what they have attained... They strived to amass great and substantive material wealth which they devoted to the realization of their dream. With their money, they took control of the world media, news agencies, the press, publishing houses, broadcasting stations, and others."

What Jews love most is war, which just allows them to make more money and colonize the world, which is why they started most of the world's conflicts: "With their money they stirred revolutions in various parts of the world with the purpose of achieving their interests...

They were behind the French Revolution, the Communist Revolution and most of the revolutions we heard and hear about, here and there... With their money they were able to control imperialistic countries and instigate them to colonize many countries in order to enable them to exploit their resources and spread corruption there... They were behind World War I... They obtained the Balfour Declaration, formed the League of Nations through which they could rule the world."

Of particular interest is the charter's claim that the Jews "were behind World War II, through which they made huge financial gains by trading in armaments, and paved the way for the establishment of their state." It seems incredible that Hamas could be so dumb, not to mention monstrously insensitive, as to suggest that the Jews were behind their own slaughter in the Holocaust. But what does one expect from genocidal terrorists? And I love this part: "It was they who instigated the replacement of the League of Nations with the United Nations and the Security Council to enable them to rule the world through them." There is no organization in the world more irrationally hateful of Israel than the United Nations. But the Jews control that, too.

The Jews are not just the world's corrupters, they are also mass murders, out for the extermination of all Islam: "They aim at undermining societies, destroying values, corrupting consciences, deteriorating character and annihilating Islam. It is behind the drug trade and alcoholism in all its kinds so as to facilitate its control and expansion."

And the finale, the Jews are Nazis: "There is no way out except by concentrating all powers and energies to face this Nazi, vicious Tatar invasion."

With such a vicious, grisly founding document it is no wonder that Hamas is responsible for the murder of thousands of innocent Israelis or that their rockets seek the extermination of millions of Jews.

But just as the Germans discovered that Hitler was lethal not just to Jews but to Germans, so too Hamas uses thousands of innocent Palestinian children as human shields.

The world has remained silent as Hamas has fired their missiles and hidden its arsenals in schools, playgrounds, hospitals and family homes. And it has proven indifferent to the public call on the part of Hamas leaders for Palestinian children to actively use "their chests and bodies" as protective shields for Hamas rockets.

Hamas has continually squandered the opportunity to build a thriving Palestinian society. Instead, it has only bombs, tunnels and rockets to show for the billions funneled to it in international aid and the repeated efforts on the part of Israel to negotiate a peaceful resolution.

This is Israel's third war against Hamas since its total withdrawal from Gaza in 2005, when Israel dismantled its settlements and removed all vestiges of its presence.

Should Hamas prevail, millions may die for no other reason than they are Jewish. And untold numbers of Palestinian children will be offered up by the twisted terrorists in the most evil form of modern-day human sacrifice.

The author, "America's rabbi," whom The Washington Post calls "the most famous rabbi in America," is the international best-selling author of 29 books, and will shortly publish The Fed-up Man of Faith: Challenging God in the Face of Tragedy and Suffering. Follow him on Twitter @RabbiShmuley.