There are some people who are so shy and self-conscious that they constantly worry about others view them. The solution to this problem is to become so totally absorbed in what you are doing or thinking about, that you become almost oblivious to the people in your surroundings.

Concern about how others view you often prevents you from concentrating. But if you calmly work on becoming involved in worthwhile pursuits, you will overcome this self-consciousness.


This is a beautiful garden only few miles from a town in the Netherlands where I have some friends.
It was the idea of the owner of the land when he was on holiday in Austria. It is a lovely garden. End of autumn he digs out most of the plants and keeps them in a kind of "plant house" and puts them back in spring (because of the frost).

The Easiest, Fastest And Cleanest Way To Cut A Watermelon 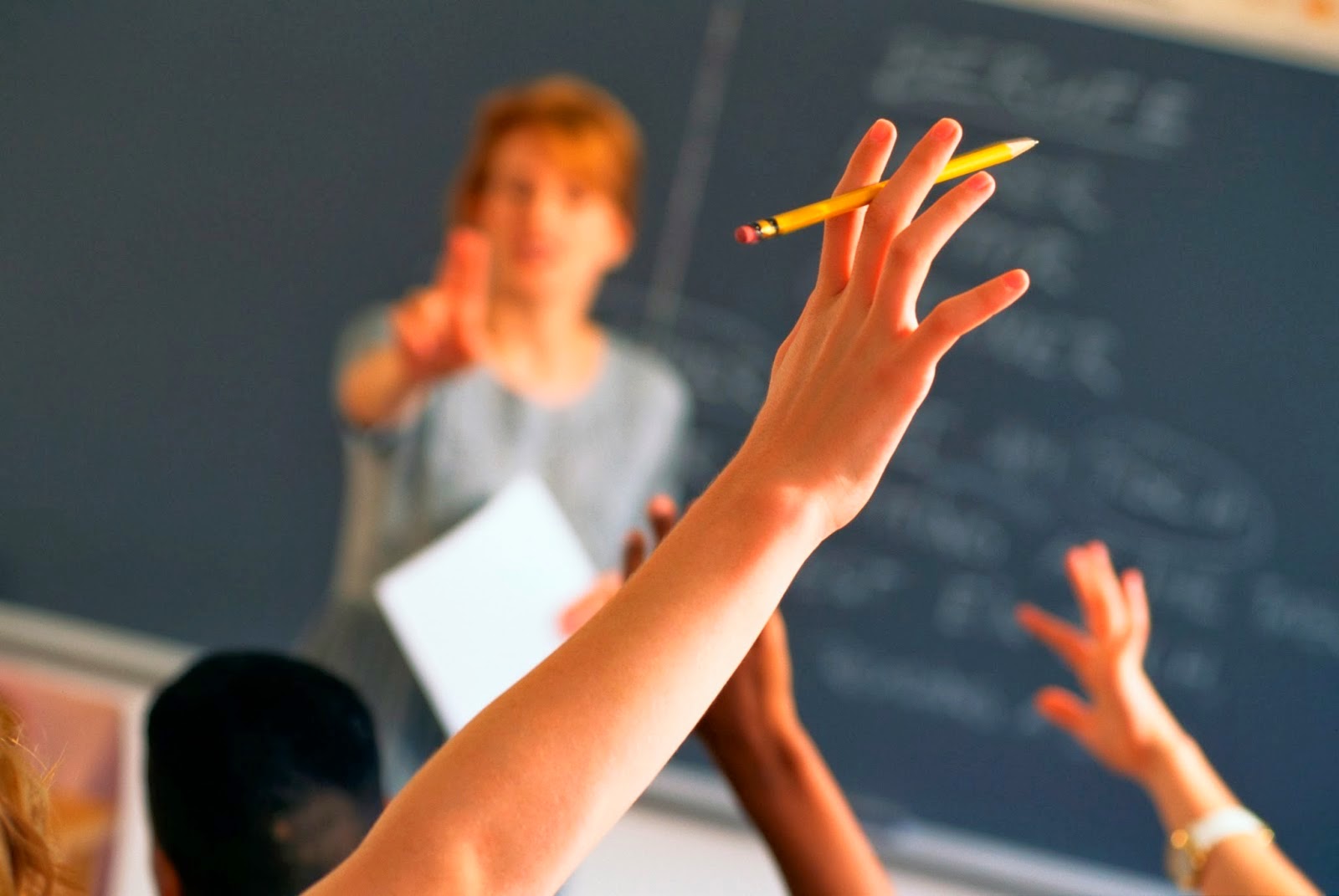 It was one of the great moments of personal transformation, and it changed not only Moses but our very conception of leadership itself.

By the end of the book of Bamidbar, Moses career as a leader seemed to have come to its end. He had appointed his successor, Joshua, and it would be he, not Moses, who would lead the people across the Jordan into the promised land. Moses seemed to have achieved everything he was destined to achieve. For him there would be no more battles to fight, no more miracles to perform, no more prayers to make on behalf of the people.

It is what Moses did next that bears the mark of greatness. For the last month of his life he assembled the people and delivered the series of addresses we know as the book of Devarim, literally "words." In them he reviewed the people's past and foresaw their future. He gave them laws, some he had given them before but in a different form, others that were new and that he had waited to announce until the people were about to enter the land. Linking all these details of law and history into a single overarching vision, he taught the people to see themselves as an am kadosh, a holy people, the only people whose sovereign and lawgiver was God himself.

If someone who knew nothing about Judaism and the Jewish people were to ask you for a single book that would explain them both – who Jews are and why they do what they do – the best answer would be Devarim.  No other book so encapsulates and dramatises all the key elements of Judaism as a faith and way of life.

In a much-watched TED lecture, and a book with the same name,[1] Simon Sinek says that the transformative leaders are those who 'Start with Why.' More poetically, Antoine de Saint-Exupery said, "If you want to build a ship, don't drum up people together to collect wood and don't assign them tasks and work, but rather teach them to long for the endless immensity of the sea."

In Devarim, Moses gave the people their Why. They are God's people, the nation on whom He has set his love, the people He rescued from slavery and gave, in the form of the commandments, the constitution of liberty. They may be small but they are unique. They are the people who, in themselves, testify to something beyond themselves. They are the people whose fate will defy the normal laws of history. Other nations, says Moses, will recognise the miraculous nature of the Jewish story – and so, from Blaise Pascal to Nikolai Berdyaev and beyond, they did

In the last month of his life Moses ceased to be the liberator, the miracle-worker and redeemer, and became instead Moshe Rabbenu, "Moses, our teacher." He was the first instance in history of a leadership type in which Jews have excelled: the leader-as- teacher.

Moses surely knew that some of his greatest achievements would not last forever. The people he had rescued would one day suffer exile and persecution again. The next time, though, they would not have a Moses to do miracles. So he planted a vision in their minds, hope in their hearts, a discipline in their deeds and a strength in their souls that would never fade. When leaders become educators they change lives.

In a powerful essay, 'Who is fit to lead the Jewish people?' Rabbi Joseph Soloveitchik contrasted the Jewish attitude to kings and teachers as leadership types.[2] The Torah places severe limits on the power of kings. They must not multiply gold, or wives, or horses. A king is commanded "not to consider himself better than his fellow Israelites nor turn from the law to the right or to the left" (Deut. 17: 20).

A king was only to be appointed at the request of the people. According to Ibn Ezra, the appointment of a king was a permission, not an obligation. Abrabanel held that it was a concession to human frailty. Rabbenu Bachya regarded the existence of a king as a punishment, not a reward.[3] In short, Judaism is at best ambivalent about monarchy, that is to say, about leadership-as-power.

On the other hand, its regard for teachers is almost unlimited. "Let the fear of your teacher be as the fear of heaven," says the Talmud.[4] Respect and reverence for your teacher should be greater even than respect and reverence for your parents, rules Rambam, because parents bring you into this world, while teachers give you entrance to the world to come.[5]

For twenty-two years, as a Chief Rabbi, I have carried with me the following quotation from one of the greatest leaders of the Zionist movement, Israel's first Prime Minister, David Ben-Gurion. Although he was a secular Jew, he was enough of a historian and Bible scholar to understand this dimension of leadership, and said so in eloquent words:

Whether you hold humble office in a municipality or in a small union or high office in a national government, the principles are the same: you must know what you want to achieve, be certain of your aims, and have these goals constantly in mind. You must fix your priorities. You must educate your party, and must educate the wider public. You must have confidence in your people – often greater than they have in themselves, for the true political leader knows instinctively the measure of man's capacities and can rouse him to exert them in times of crisis. You must know when to fight your political opponents, and when to mark time. You must never compromise on matters of principle. You must always be conscious of the element of timing, and this demands a constant awareness of what is going on around you – in your region if you are a local leader, in your country and in the world if you are a national leader. And since the world never stops for a moment, and the pattern of power changes its elements like the movement of a kaleidoscope, you must constantly reassess chosen policies towards the achievement of your aims. A political leader must spend a lot of time thinking. And he must spend a lot of time educating the public, and educating them anew.[6]

The poet Shelley once said that "poets are the unacknowledged legislators of the world." Whether this is true or false, I do not know, but this I know: that there is all the difference between giving people what they want and teaching them what to want.

Teachers are the unacknowledged builders of the future, and if a leader seeks to make lasting change, he or she must follow in the footsteps of Moses and become an educator. The leader-as-teacher, using influence not power, spiritual and intellectual authority rather coercive force, was one the greatest contributions Judaism ever made to the moral horizons of humankind and it can be seen most clearly in the Book of Devarim, when Moses for the last month of his life summoned the next generation and taught them laws and lessons that would survive, and inspire, as long as there are human beings on earth.

Police shoot and kill driver, who flipped bus on its side with construction vehicle; pedestrian in his twenties killed in incident; 5 others lightly injured; Aharonovitch: Slain terrorist was known to security forces.

Despite reduction of boots on the ground, clashes continue in Gaza
(JPost - Defense Video)

Despite reduction of boots on the ground, clashes continue in Gaza
(JPost - Defense Video)

A tractor hit a bus in Jerusalem Monday, overturning it, in what police are saying was a  terror attack. 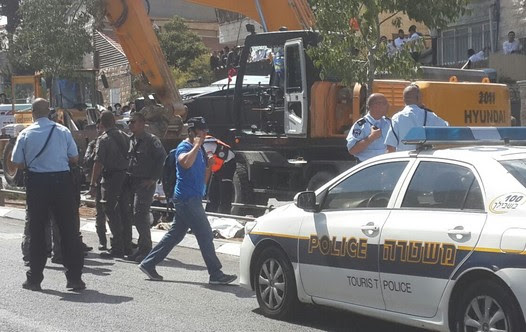 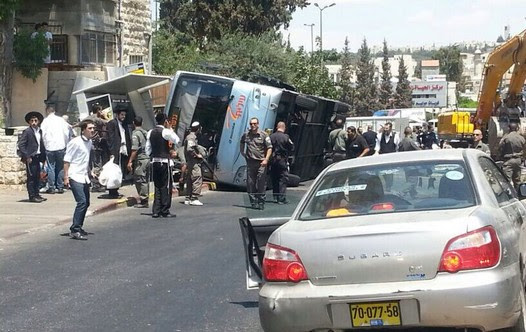 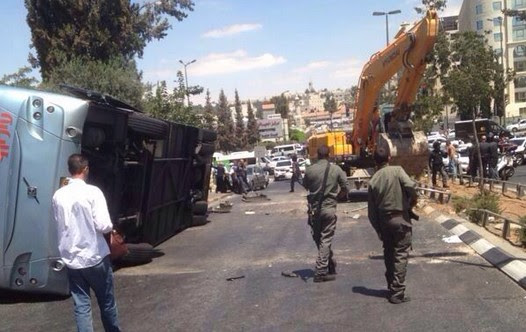 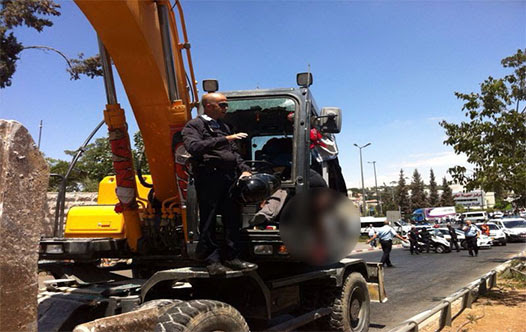 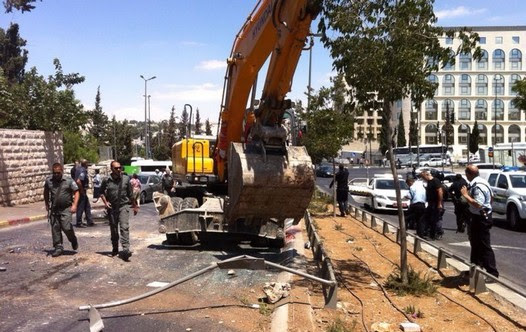 An approximately 25-year-old pedestrian who was struck by the tractor was critically wounded, eventually succumbing to his wounds after efforts to resuscitate him failed.

The driver of the tractor was shot and killed by police.

Five additional people were lightly injured in the attack, including the driver of the bus, which was empty at the time of the attack. MDA paramedics transported the injured to local area hospitals.

Jerusalem District police chief Yossi Pariente said police feared that such a terror attack may be attempted given the current tensions in the capital on the background of the IDF's ongoing operation in the Gaza Strip.

Earlier on Monday, five police officers were lightly injured in rioting at the Temple Mount.

Public Security Minister Yitzhak Aharonovitch arrived at the scene of the incident, saying that "the terrorist was known to security forces from a separate incident."

Aharonovitch said the slain terrorist's family was being questioned. Israeli media said the driver was a resident of East Jerusalem.

He cautioned that further attempts to carry out terror attacks were possible, and that security forces were prepared to handle such incidents.

In two incidents in July 2008, construction vehicles driven by Palestinians hit Israeli buses and pedestrians, killing a total of three people. In both incidents, the attackers were shot dead.

Three years later, an Arab truck driver drove into cars and pedestrians in Tel Aviv, killing one person, in what police said was a deliberate attack. The driver was apprehended and sentenced to life imprisonment.