With the rockets coming from the North, this is a good time to think about this.

What are you doing for peace? We can't always find magical solutions ourselves that will transform former adversaries into being great friends. But we can always pray for peace.
We can pray to find peace in our own lives. We can ask our loving Father and powerful King, Creator and Sustainer of the universe, to help us have harmonious relationships with others.
We can pray to the Almighty to help specific people we know who are involved in a quarrel to bury the hatchet and smoke a peace pipe together, metaphorically of course.
We can pray to the Almighty for peace for our People and for all the nations of the world.
Every prayer has some effect. Every prayer elevates us spiritually. Every prayer connects us with the Creator of the universe and helps us gain a much more expansive perspective. 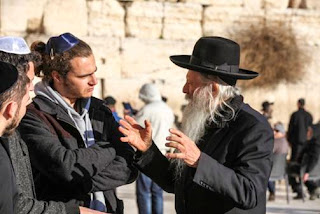 The differences between our beliefs and theirs are not just social. There are major structural differences between our teachings. Yet, many Jews believe that they can follow those beliefs and not compromise the Torah's teachings.
A young man who had been learning in one of the local yeshivas announced that he was going to go to India to study the Eastern religions. The rabbi asked me to speak with him. Here is part of our conversation.

Arabs Attack with Sticks in Haifa, Shout 'Slaughter the Jew'

Arab rioters (file)
Flash 90
Several young Arab assailants armed with rubber straps, sticks and rocks entered the Hadar neighborhood in Haifa on Sunday, where they began beating passersby with the sticks and shouting "slaughter the Jew" in Arabic.
According to one of the testimonies from the attack, at around 11 p.m. the Arab youths arrived at Michael Street in the neighborhood and started threatening haredi residents on the street, with the sticks in their hands.
The haredi passersby fled from the threat of the Arab assailants, taking shelter in a Talmud Torah religious school, and from there they called up police forces who quickly arrived on the scene.
However, one of the residents who was coming home from a synagogue was less fortunate, as the Arab attackers began raining blows on him with the sticks and rocks.
Within minutes, police had arrested the attackers, and it became clear that they were minors. Police investigators from the Coastal District have opened an investigation into the circumstances of the attack.
Much of the Arab-on-Jew violence in Israel is carried out by minors, who cannot be prosecuted with the full force of the law. Legislation proposed by MK Danny Danon (Likud) and others calls for Arab minors who conduct rock throwing and other attacks to be penalized by having their parents lose state-funded child stipends.
"Parents must know that if they do not educate their children, they will receive fines and will not receive state funding. They need to understand that we are taking off the gloves," explained Danon.

In this weeks Jerusalem Post was a story about Walter Bingham's childhood in Germany.. It is a very interesting story, but what caught my eye based on the story above about the Arab's wanting us dead was a quote from Bingham about his school.

"Boys who went to school with me also had uniforms and a dagger." He brings out one such dagger and points out the words "Blood and Honor" engraved on the blade. I once heard the children singing: "When Jewish blood spurts from the knife, all will be better."

Nothing seems to have changed much except we are supposingly in charge of our country, but we are still being killed.

or http://www.yehudalave.com/
Posted by Rabbi Yehuda Lave at 11:15 AM