Learn Patience By Observing Others

Learn from the patience of others. Every person who is patient in situations that challenge you, serves as a role model for how you too can be patient.

As you observe the body language, manner of speaking, and word content of patient people, you have a picture of what you need to do to become more patient yourself.

...It's a 43 second commercial and the sponsor isn't identified until the final few seconds.

Has Nasa built a WARP DRIVE?

The system, reportedly tested by Nasa at the Johnson Space Center in Houston, is based on electromagnetic drive which converts electrical energy into thrust without the need for rocket fuel.

Scientists at Karlsruhe Institute of Technology in Germany have created a portable invisibility cloak that uses diffused scattered light to hide small objects.

Thermo Tent (pictured) uses lightweight insulation inside to regulate temperature. Inventor Derek O'Sullivan, from Ireland, came up the idea after waking up cold on a family camping trip.

Now see what we are facing

http://www.israelvideonetwork.com/the-awesome-video-that-will-make-muslim-apologists-head-explode/
is a Must Watch

An Israeli Rancher Son's Story of Land and Survival 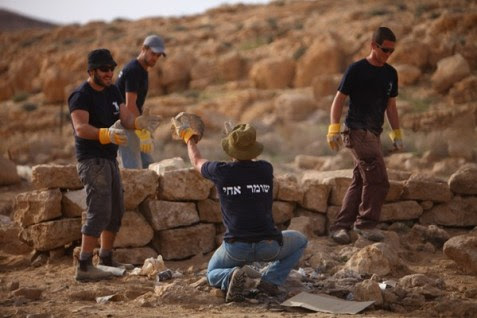 Eight years ago, an Israeli rancher from Moshav Zippori in the Lower Galilee region reached a breaking point. Thieves and marauders had been targeting Chaim Zilberman's sprawling ranch; his land was burnt black and cattle fences cut down. On the verge of bankruptcy, the rancher told his family during a Friday Shabbat dinner one night that he would no longer be able to hold onto the ranch.

His son, Yoel Zilberman, who had served in the Israeli navy's elite commando unit known as Shayetet and fought in the Second Lebanon War, sprang into action. In officer's training course at the time, Zilberman took army leave to set up a guarding outpost on his father's land. A Bedouin family from a local tribe had been invading his family's territory for years, and had even threatened to murder Yoel's father, while slaughtering the family's cows without any police intervention.

"I took with me an Israeli flag, two mattresses, 40 books and set up camp on this secluded area of our ranch guarding the land from encroachers," Yoel Zilberman, 30, told Tazpit News Agency in an interview. "I told my dad that we were not going to abandon our land to criminals."

Zilberman, along with buddies from the army and area friends, began to patrol some of the 5,000 dunams of land (about 1,200 acres) of his family's ranch, driving away the thieves. He soon realized that land encroachment was not only his family's problem as other ranchers from the region reached out and asked him for help.

In 2007, Zilberman, along with On Rifman from the Negev established HaShomer Hachadash to help farmers and ranchers in both Negev and Galilee guard their properties and maintain their farms; preventing arson and theft and strengthening farmers. Today, thousands of volunteers are part of the movement, undergoing intensive training, patrolling the land from observation posts strategically set up in the Negev and Galilee to guard farms when local law enforcement remains unequipped to do so.

A third generation Israeli rancher, Yoel Zilberman, 30, was born and raised in Moshav Zippori, a community whose residents were once mostly farmers. His grandparents came to Israel after the Holocaust and were the first founding couple of the moshav.

For Zilberman, the Shomer Hachadash movement is not only about protecting the land but also connecting to it.

"The younger generation of Israel today doesn't understand the significance of our land," believes Zilberman. "They know all about Harry Potter but nothing about [Labor Zionist leader] Berl Katznelson."

"Over the years, we've had volunteers from all over Israel including secular Israelis from Tel Aviv and families from Jerusalem as well as volunteers from around the world, come to reconnect to the land, to the outdoors, to the history and heritage of our nation," he explained.

"Guarding the land brings people of right and left ideologies together. The responsibility to help Israel's farmers is bigger than politics."

"Israel is a land of milk and honey but honey and milk don't simply grow on trees. It is something that man has to help make happen," asserted Zilberman.

"We are not a religious family but we were raised with very strong Zionistic values," Zilberman told Tazpit of his family. He believes that" the personality of the Jewish people originated from the Land of Israel."

"We lose our soul when we distance ourselves from the land. Our identity depends on the connection we share with this land."

Furthermore, Zilberman sees Bedouins as part of Israeli society and knows many who are good neighbors to local farmers. "It is always a minority that causes problems. There are many Bedouins in the area with whom we are very good friends, and have good relations. These Bedouins want to stop the criminal activity in their villages, caused by the same criminals who encroach on state land."

"When Mark Twain visited the Galilee, he said it was desert. Today it looks like the Garden of Eden because of the farmers. Every Jew wants Israel to be a Garden of Eden for all, including for minorities."

Earlier in the week, Shomer Hachadash's founder and CEO received the 2015 Moskowitz Prize for Zionism, an annual award given to those who put Zionism into action. Zilberman, who lives today in Kfar Adumim with his wife and children, told Tazpit upon receiving the prize that "I am not one for prizes or awards. But it is important to be a role model for young people and show that real change can take place with hard work. That's the message I want to instill."

About the Author: Anav Silverman is a regular contributor to Tazpit News Agency.

or http://www.yehudalave.com/
Posted by Rabbi Yehuda Lave at 2:21 PM