Pray or Meditate  To Overcome Sadness

Use prayer or meditation to help overcome sadness. Since you have a rabbinical obligation to pray, take it as an opportunity to Talk to the Almighty in your own language. Tell Him how awful you feel. Ask Him for the strength to cope with your present difficulties, and to grow from them. And don't forget to talk to him when you are happy as well.

The oldest copy of the Ten Commandments in the world is on display at Israel's national museum.
By: Hana Levi Julian
Published: May 5th, 2015 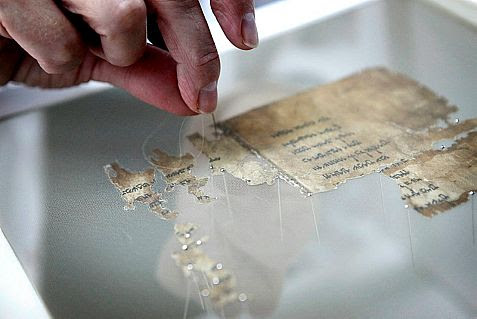 A worker of the Israel Antiquities Authority sews fragments of the Dead Sea scrolls, in a preservation laboratory at the Israel Museum in Jerusalem.
Photo Credit: Flash 90

Israel's national museum has opened a rare exhibit that includes the world's oldest copy of the Ten Commandments.

The exhibit presents objects from "pivotal moments in civilization." Among the items is a 2,000-year-old Dead Sea Scroll in which is inscribed a complete copy of the Ten Commandments.

This particular manuscript has never before been shown in Israel, and was only displayed briefly abroad.

The Dead Sea Scrolls comprise a collection of ancient Biblical manuscripts – some in fragments – discovered in a cave along the northern shores of the Dead Sea.

SHARK TANK ANYONE? from the oldest to the newest.

or http://www.yehudalave.com/
Posted by Rabbi Yehuda Lave at 11:54 AM