fainting upon getting up from bed and Shabbat Microphones

Setbacks are Part of the Process;

When you try to make peace, either for yourself or between two other people, expect setbacks. They are part of the process.

Many people are happy, even excited, to make peace when they see steady progress. Even if progress is slow, they are patient. But when they are faced with setbacks, they easily give up. When you realize that setbacks are an integral part of making progress, you realize that this is just another step that you have to make. It's like climbing a mountain path. The path doesn't always go straight up. At times it goes around the right and at times it goes around the left but the focus is on eventually getting to the destination. And therefore even if part of the path seems to be descending, it is a descent for the sake of ascent. This, too, is getting you closer to where you want to end up

fainting upon getting up from bed.

In a United States convention of neurologists from all over the world, one of the main topics was the phenomenon of people fainting upon getting up from bed.

One of the speakers was Professor Linda McMaron of Great Britain and she gave a lengthy speech regarding her study on this issue. She elaborated that after many years of study and investigation on this subject, she came to the conclusion that the fainting is caused by the sharp transfer between laying down and standing up. Professor McMaron said that it takes 12 second for the blood to flow from the feet to the brain. But when a person quickly stands up upon waking up, the blood gets 'thrown' to the brain too quickly and the result is fainting. She suggested that each person, even one that does not have a tendency to faint, upon waking up should sit on the bed, and count slowly till 12 to avoid dizziness, weakness, and/or fainting.

Her speech was rewarded with loud applause and enthusiastic feedbacks.

Another Professor, a Jewish religious man, asked permission to speak.

He said: "By us, the Jews, there is an old tradition, thousands of years old, to say a prayer of thanks to the Creator of the World for meriting us to wake up healthy and whole. The prayer is said immediately upon waking up, while one is still on the bed and sitting down. There are 12 words in this prayer and if one regulates himself to say it slowly with concentration, it takes exactly 12 seconds to says it... 12 words in 12 seconds.

He said the prayer slowly in Hebrew:

"I thank Thee, O living and eternal King, because Thou hast graciously restored my soul to me; great is Thy faithfulness."

The auditorium burst into a standing applause that roared throughout the auditorium. This time, it was for the Creator of the World.

Microphones, like the issue of separation of the sexes during prayers, had long been one of the dividing lines between orthodox and conservative congregations. 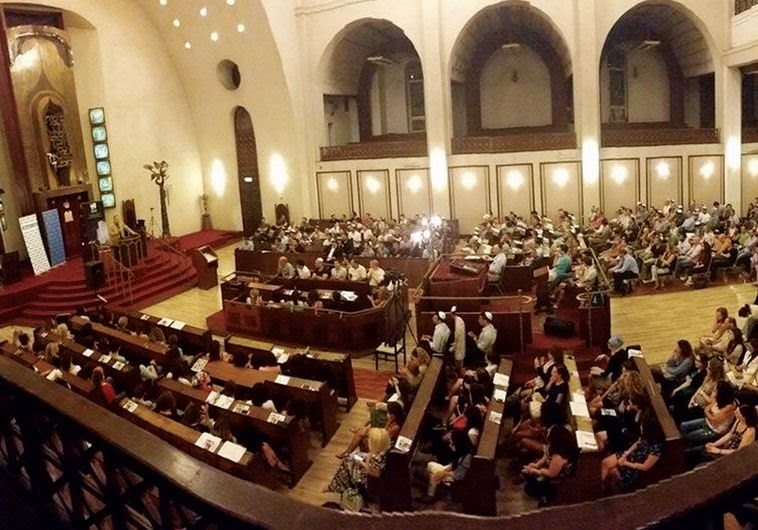 Ten years ago, the overflow crowd during the height of the summer season at Rabbi Marc Schneier's synagogue in Westhampton Beach, New York, was so large it had to be housed in tents on the lawn outside.

Acoustics were terrible, if not nonexistent, and many congregants decided to cease attending services because they felt disconnected from the activity inside.

Microphones, like the issue of separation of the sexes during prayers, had long been one of the dividing lines between Orthodox and Conservative congregations, with traditionalists shunning the technology as a violation of the legal norms regulating Shabbat observance.

The use of electricity on Shabbat, especially when completing a circuit or causing an element to heat up, potentially violates several biblical prohibitions. When Rabbi Joseph B. Soloveitchik, the leading light of modern Orthodoxy during the mid-20th century, came out against the use of microphones in synagogues during a meeting of the Rabbinical Council of America he was expressing what had become the consensus among the rabbinate.

"In the '50s and '60s the true dividing line between Orthodox and Conservative synagogues was the issue of mehitza. Microphones, while an issue, were more a halachic concern and were addressed separately," explained RCA head Rabbi Leonard A. Matanky. "Zomet's microphone is a halachically valid option and, therefore, not a concern for an Orthodox synagogue."

According to Brandeis Professor Jonathan Sarna, who studies American Jewish history, when Soloveitchik came out against the use of microphones, it was "no doubt as part of his effort to distinguish Orthodoxy from Conservative Judaism."

"Nowadays, the threat from Conservative Judaism to Orthodoxy is much reduced – everybody knows the difference – and there is much more sensitivity to the hearing impaired, as well as more pressure for larger synagogues in communities with large Orthodox populations."

Relying upon rulings by decision makers such as Rabbi Shaul Yisraeli, Isser Yehuda Unterman and Rav Haim David HaLevi, the Zomet microphone uses only transistors "without any glowing [or 'burning'] elements;" is turned on by an automatic "Shabbat timer;" and, once turned on, "current flows continuously in the system," according to technical notes on the setup released on the group's website.

According to Zomet executive director Rabbi Dan Marans, the system has come into use in 15 synagogues in Baltimore, Montreal, West Stamford and other locations, as well as in 18 old-age homes. Leading American poskim, or decidors of Halacha, have even "stipulated in contracts with synagogues that they change the system to our system so that the RCA [will be] able to send rabbis."

In many aging congregations, as the Rabbi's voice weakens and his listeners find themselves with decreasing auditory capacities, such technology can enable people to be a part of the service, he added.

Asked about the possible stigma of using the system, Marans said Zomet usually recommends that synagogues post signs stating that it is rabbinically approved, adding that innovations such as the automatic Shabbat timer and Shabbat elevator took time to be accepted but eventually became mainstream.

"I've not heard comments [against it]. If anything, people find the service more enjoyable and more elevating," agreed Schneier, adding that "We must get a dozen calls a year from rabbis contemplating putting this system into their synagogues.

"I believe within 25 years it will be commonplace in Orthodox synagogues here in the Northeast."

An Italian researcher sprayed spiders with graphene and carbon nanotubes. He found that the spiders used the particles to make stronger webs (stock image shown).

or http://www.yehudalave.com/
Posted by Rabbi Yehuda Lave at 10:15 AM