We should be careful of our actions in life, just as a person playing chess thinks carefully before making any move. Always weigh what you are planning, to see if you might later regret your move.

In a game of chess, which has no major ramifications in a person's life whether he wins or loses, each player takes much time to think of every alternative and weigh its consequences. All the more so in daily behavior, always think before speaking or taking action. We have much more to gain or lose and should at least be as patient as when playing chess.

Why it took me until this age to realize that food, like liquor or hard drugs, is also a drug, is mystery to me, but now that it has hit home, with G-d's help, since I am a foodaholic I hope to control it. I have given back to the universe 16 pounds in two weeks. 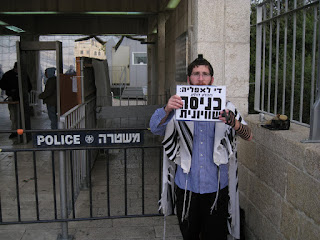 WHERE: Meet outside of Binyanei HaUma.

WHAT: The purpose of this demonstration is to enlist all Jews around the country to demand that the government pass a law allowing Jewish prayer on the Temple Mount for any Jew who wants to pray on it, in accordance with Jewish rights and the democratic right of all citizens of Israel to worship as they see fit.

There is a lot of support in this country for such a law - let's show up and put that support into action. Invite your families and friends to participate!

Since the police require a permit for demonstrations numbering 50 people or above, the plan is to divide the crowd into groups of maximum 45 per group, to demonstrate in different places. Please bring a sign and an Israeli flag to the demonstration. Men who know how to blow a Shofar should bring that as well.

Please SPREAD THE WORD and forward to family, friends and email lists!

#TheAskCharlieShow – Episode 10 – How to Forgive

Many times, when someone hurts or offends us, we get defensive and want to "even the scales." However, studies show that holding on to resentment is unhealthy. In truth, forgiveness benefits the victim more than the perpetrator. In this episode of #TheAskCharlieShow, Charlie explains the power of forgiveness and shares three practical steps to not only move past negativity but to use it to better your life.

Thank you for watching #TheAskCharlieShow. Do you have questions? Tweet them to @charlieharary and include #TACS.

Great video for a little blast from the past

Girl from the North Country Bob Dylan and Johnny Cash

A wonderful tourism video you can watch without having to go there!!

Enjoy the US Navy slide show at the bottom of the letter and Shabat Shalom
--
Visit my Blog: http://yehudalave.blogspot.com