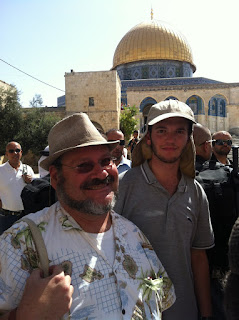 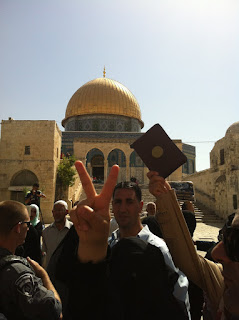 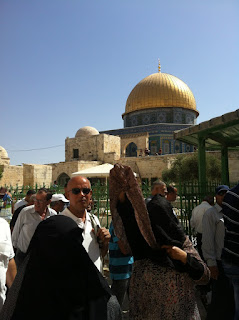 Rosh Hodesh Elul had come and it was time to go to the Temple Mount to make our stand, that the the Jewish people have a right to go up to the temple mount to Worship just like all of the other peoples of the world do.
In our own Jewish country, a Jew is arrested for praying on Judaism's most holy site. The oral law teaches that the Temple mount is the heart of the Jewish people. G-d is its soul, but the heart is the Temple Mount.
Having gone to the Mikvah, I came to the Kotel at 7:30 AM, having prayed at 5:45 AM. The Israeli police freely let in tourists, but Jews had to wait in the hot sun (it was 100 yesterday) to be let in only in two small groups of 12 each. My gang of Micki, Liz and Kathy stood in line and got to come in with 8 others. Two were turned away after being chosen.
We were accompanied by 50 police officers who moved the death chanting Arabs, who for an hour and 1/2 shouted Ali Akbar,  throw olives, water balloons and death threats at us for our whole trip. A friend who was there video taped the whole event and I will have it on You Tube soon. While the police could have easily told the Jordain Police who they work with to keep their people under control, the decision is made by someone to let the Jews be abused.
The goal of someone (who is really not known) is discourage Jews from going up to the Temple Mount in the chance that they might pray or exercise their right to to to the Temple Mount. No one says that anyone has to go, but it should be our right here in the Land of Israel. Har HaBáyit  is not in our hands

Anger Is Only For Show


Maimonides wrote that the correct path is "moderation in all character traits."
As regards to anger, he writes: "Do not be hot-tempered and easy to anger, nor like a corpse without feelings. Rather show anger only over important matters in order to prevent others from behaving wrongly on future occasions... Even when you have a practical, constructive reason for getting angry, only appear as if you are angry, but inwardly remain calm."
Love Yehuda Lave


The Temple Mount, known in Hebrew as Har HaBáyit (Hebrew: הַר הַבַּיִת) or as Har HaMōriyā (Hebrew: הַר הַמוריה) and in Arabic as the Haram al-Sharif (Arabic: الحرم القدسي الشريف‎, al-ḥaram al-qudsī ash-šarīf), the Noble Sanctuary, is one of the most important religious sites in the Old City of Jerusalem. It has been used as a religious site for thousands of years. At least four religious traditions are known to have made use of the Temple Mount: Judaism, Christianity, Roman religion, and Islam. The present site is dominated by three monumental structures from the early Umayyad period: the al-Aqsa Mosque, the Dome of the Rock and the Dome of the Chain. Herodian walls with additions dating back to the late Byzantine and early Islamic periods cut through the flanks of the Mount. It can be ascended via four gates, with guard posts of Israeli police in the vicinity of each.

Fortunately this was not me that was arrested, but I also was wearing  tzitzit (tallit katan)  and the Arabs who were shouting for us to die were all dressed in their garb:

It was a "two-fer" on the Temple Mount in the Old City of Jerusalem on Sunday.
Israel Police arrested a Jewish boy for wearing his as commanded in the Torah, and a Jewish man for singing into the ear of a Jewish groom ahead of his nuptials a few hours later.
No one arrested anyone for subsequenly attacking an Israeli police officer, who suffered an injured leg.
Members of the Islamic Waqf on the Temple Mount complained to the Israeli police about the Jewish boy who was walking on the Temple Mount wearing his Tzitzit, according to other Jewish visitors on the Jewish holy site.
The Muslim security officers complained that the boy's Tzitzit were a "Jewish symbol" — in violation of the regulations that state one must not wear obvious religious symbols into the site — and the Islamic Waqf officer warned a "disruption" would ignite because of the boy's Jewish garment.
Tzitzit are the four-cornered fringed garment that all Jewish men and boys are enjoined in the Torah to wear. The commandment is repeated in the third paragraph of the Shema prayer, the single most important prayer in Judaism save for the Kaddish, which is recited for the departed.
The police arrested the Jewish minor and took him to the police station.
But by the time they reached the entrance to the police station, the police apparently realized they had no cause to arrest the boy and he was unconditionally released.
The boy is a resident of Beit El.
A short time later, a 35-year-old Jewish man was arrested at the Temple Mount as well.
According to the police, the man was walking with a groom on the Temple Mount, while quietly singing to into his ear the popular Jewish wedding song, "Od Yishama" — a song which is often sung when accompanying a groom on his wedding day.
This man, celebrating the imminent nuptials of his friend, was also taken into custody. The Honenu civil rights NGO has issued a statement saying its legal counsel has gone to the police precinct in an attempt to secure his release in time for him to attend the wedding of his friend.
Following that incident an Israeli police officer was attacked by Arabs at the site. He was slightly injured when the Arabs hurled a wooden beam at him, hitting his leg.
There are no reports of anyone having been arrested, however, for attacking the Israeli police officer.

or http://www.yehudalave.com/
Posted by Rabbi Yehuda Lave at 10:05 AM