At every given moment in your life "The Almighty is telling you, 'Choose life!'"

Imagine how you will enhance your life when you respond, "Yes! I will make a life-enhancing choice right now." Have frequent self-conversations about your decision to "choose life!"

Each moment you make four choices. 1)You choose your thoughts for the moment. 2)You choose the words you say or don't say. 3)You choose the actions you will or won't take. 4) You choose not only what goes out of your mouth but what you put into your mouth.

The more you think about making life-enhancing choices, the easier it will be for you to think of wiser answers to this question.

Sometimes, a life-enhancing choice is quite obvious. All we need to do is ask ourselves this question and we will know the answer. At other times we might not be so sure. But at least we will be going in the right direction.

With this new found principle, I was able to stick to my goal of eating only one small meal a day on most days. I was not forced to give up anything I wanted, nor to break the shabbat rules as I ate Friday night late (normally you should only eat between 11 am and 6 pm). I made this new resolution five weeks ago, on the Shabbat before Rosh Hodesh and I stepped on the scale this morning, 15 Kilo lighter. That is 33 pounds. It is huge for someone my age, as it gets harder to loose weight when you are older. I am not skinny mini yet, to get to my true lowest weight at my short size, I need to get rid of another 20 Kilo. But by simply making the right choices and choosing life, I feel 10 years younger.

No one cares about what you eat when you are by yourself. When you with other people, the social aspect of eating forces you to adjust slightly, but you can still be with your friends and join in with them if you are cautious. Shabbat and Yom Tov has its own requirements and you can work around them as well (for example I usually fast -except for water on Friday until Shabbat and on Sunday).

Life is short --Choose life and a happy new year--Shana Tova to all my friends and former friends. I hope to spend more time with anyone who wants to with me and have a good time with them in this coming year. I have a lot of mistakes to make up to and people in my life that I have made mistakes with, but i am doing the best chuva I know how to do. Being in Jerusalem and walking in G-d's ways.

Shana Tova (happy New Year ) from Yehuda Lave
Israel has a special relationship with the US and its fight on terror, Yesterday September 10th I participated in a special ceremony at the 9/11 memorial here in Jerusalem where we celebrated those that lost their lives on 9/11 and the Police and Fire workers who helped save so many. The Video below helps bring it to life and my pictures below were my contribution to the even.

September 11 event in Jerusalem
see you tube slide show below 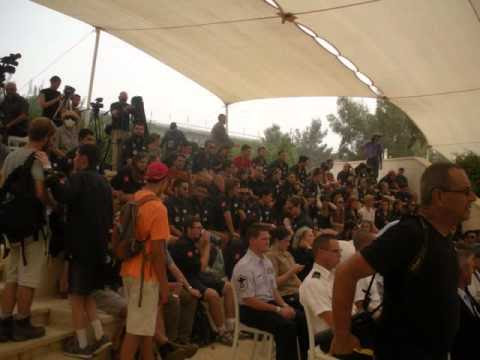 Europe's treatment of her Jews and later the state of Israel, is not so easily forgotten.  Today Europe has to face the growing problem of the refugees from those Islamic countries...At least they are not Jews... Even so, of course they deserve to be treated as human beings, but by their own countries and by others who can help them. We must focus on help for the Jews, as no one else will as history has proved.

Why are so many of the grandchildren of Nazis and Nazi collaborators who brought us the Holocaust once again declaring war on the Jews?

Why have we seen such an increase in antisemitism and irrationally virulent anti-Zionism in western Europe?

To answer these questions, a myth must first be exposed.

That myth is the one perpetrated by the French, the Dutch, the Norwegians, the Swiss, the Belgians, the Austrians, and many other western Europeans: namely that the Holocaust was solely the work of German Nazis aided perhaps by some Polish, Ukrainian, Latvian, Lithuanian, and Estonian collaborators.

The Holocaust was perpetrated by Europeans: by Nazi sympathizers and collaborators among the French, Dutch, Norwegians, Swiss, Belgians, Austrians and other Europeans, both Western and Eastern.

If the French government had not deported to the death camps more Jews than their German occupiers asked for; if so many Dutch and Belgian citizens and government officials had not cooperated in the roundup of Jews; if so many Norwegians had not supported Quisling; if Swiss government officials and bankers had not exploited Jews; if Austria had not been more Nazi than the Nazis, the Holocaust would not have had so many Jewish victims.

In light of the widespread European complicity in the destruction of European Jewry, the pervasive anti-Semitism and irrationally hateful anti-Zionism that has recently surfaced throughout western Europe toward Israel should surprise no one.

"Oh no," we hear from European apologists. "This is different. We don't hate the Jews. We only hate their nation-state. Moreover, the Nazis were right-wing. were left-wing, so we can't be anti-Semites."

The hard left has a history of anti-Semitism as deep and enduring as the hard right. The line from Voltaire to Karl Marx, to Levrenti Beria, to Robert Faurisson, to today's hard-left Israel bashers is as straight as the line from Wilhelm Mars to the persecutors of Alfred Dreyfus to Hitler.

The Jews of Europe have always been crushed between the Black and the Red - victims of extremism whether it be the ultra-nationalism of Khmelnitsky to the ultra-anti-Semitism of Stalin.

"But some of the most strident anti-Zionists are Jews, such as Norman Finkelstein and even Israelis such as Gilad Atzmon. Surely they can't be anti-Semites?"

Why not? Gertrude Stein and Alice Toklas collaborated with the Gestapo. Atzmon, a hard leftist, describes himself as a proud self-hating Jew and admits that his ideas derive from a notorious anti-Semite.

He denies that the Holocaust is historically proved but he believes that Jews may well have killed Christian children to use their blood to bake Passover matzah. And he thinks it's "rational" to burn down synagogues.

"But Israel is doing bad things to the Palestinians," the European apologists insist, "and we are sensitive to the plight of the underdog."

No, you're not! Where are your demonstrations on behalf of the oppressed Tibetans, Georgians, Syrians, Armenians, Kurds, or even Ukrainians?

Where are your BDS movements against the Chinese, the Russians, the Cubans, the Turks, or the Assad regime?

Would there be demonstrations and BDS campaigns on behalf of the Palestinians if they were oppressed by Jordan or Egypt ?

Oh, wait! The Palestinians were oppressed by Egypt and Jordan. Gaza was an open-air prison between 1948 and 1967, when Egypt was the occupying power. And remember Black September, when Jordan killed more Palestinians than Israel did in a century? I don't remember any demonstration or BDS campaigns -- because there weren't any.

When Arabs occupy or kill Arabs, Europeans go ho-hum. But when Israel opens a soda factory in Maale Adumim, which even the Palestinian leadership acknowledges will remain part of Israel in any peace deal, Oxfam parts ways with Scarlett Johansson for advertising a soda company that employs hundreds of Palestinians.

Keep in mind that Oxfam has provided "aid and material support" to two anti-Israel terrorist groups, according to the Tel Aviv-based Israeli Law Group.

The hypocrisy of so many hard-left western Europeans would be staggering if it were not so predictable based on the sordid history of Western Europe's treatment of the Jews.

Even England, which was on the right side of the war against Nazism, has a long history of anti-Semitism, beginning with the expulsion of the Jews in 1290 to the notorious White Paper of 1939, which prevented the Jews of Europe from seeking asylum from the Nazis in British-mandated Palestine. And Ireland, which vacillated in the war against Hitler, boasts some of the most virulent anti-Israel rhetoric.

Theodore Herzl understood the pervasiveness and irrationality of European anti-Semitism, which led him to the conclusion that the only solution to Europe's Jewish problem was for European Jews to leave that bastion of Jew hatred and return to their original homeland, which is now the State of Israel.

As author Amos Oz once aptly observed: the walls of his grandparents' Europe were covered with graffiti saying, "Jews, go to Palestine." Now they say, "Jews, get out of Palestine" by which is meant Israel.

Who do these western European bigots think they're fooling? Only fools who want to be fooled in the interest of denying that they are manifesting new variations on their grandparents' old biases.

Any objective person with an open mind, open eyes, and an open heart must see the double standard being applied to the nation-state of the Jewish people. Many doing so are the grandchildren of those who lethally applied a double standard to the Jews of Europe in the 1930s and 1940s.

Laser could blast asteroids and make interstellar travel a reality

To simulate a laser's ability to deflect an asteroid, researchers directed a laser onto the target until it glowed white hot, producing a 'rocket engine' using the asteroid itself as the propellant.