Your Mind Can Choose to Enjoy What You Do


One of the most self-empowering ideas for a happy, fulfilling life is that it's up to your own mind to choose to enjoy what you do. You have a tremendous power to develop this attitude.

If you need to do something that seems uninteresting and boring at first, ask yourself, "How can I find a way to enjoy what I need to do?"

Brainstorm. Enjoy the challenge of thinking of a number of ways to make the task more meaningful and fulfilling.

Ask yourself, "What are some of the ways that I can think about this task (or project, goal, or job) that will enable me to enjoy what I am doing?"

Lou Costello (Abbott and Costello) demonstrates how to do it, even when showing that 13 x 7 is 28 as in the video below.

Bette Midler inspiring singing the wind beneath my wings at prayer service shortly after 9/11 coming up in a few days.
https://www.youtube.com/watch?v=lGKOtLPMjtI
Octopus carrying a coconut shell..arms and legs come in handy


Abbot and Costello Prove that 7 times 13 is 28 (with the bit  mentioned above)
https://www.youtube.com/watch?v=MS2aEfbEi7s

Sun City, North West (this is about the attached slide show)

From Wikipedia, the free encyclopedia
J 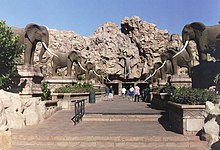 The Bridge of Time facing the Entertainment Centre

Sun City is a luxury resort and casino, situated in the North West Province of South Africa. It is located between the Elands River and the Pilanesberg, about two hours' drive from Johannesburg, near the city of Rustenburg. The complex borders the Pilanesberg Game Reserve.

Sun City was developed by the hotel magnate Sol Kerzner as part of his Sun International group of properties. It was officially opened on 7 December 1979; at the time it was located in the Bantustan of Bophuthatswana. Sun City featured a large auditorium which seated 6,230.

As Bophuthatswana had been declared an independent state by South Africa's apartheid government (although unrecognized as such by any other country), it could provide entertainment such as gambling and topless revue shows which were banned in South Africa. These factors, as well as its relatively close location to the large metropolitan areas of Pretoria and Johannesburg, ensured that Sun City soon became a popular holiday and weekend destination. The United Nations imposed a cultural boycott on South Africa in condemnation of apartheid. Despite this, many famous performers chose to flout the boycott and perform at the venue, such as the Beach Boys,[2] Linda Ronstadt,[2] Cher,[2] Millie Jackson,[2] Liza Minnelli,[2] Frank Sinatra (1981),[3] Paul Anka,[3] Status Quo,[4] Rod Stewart (July 1983),[4][3] and Elton John (October 1983).[3]

British rock band Queen's series of performances at the venue in October 1984 in transgression of the boycott caused considerable controversy, prompting criticism in the British music press, a fine from the Musicians' Union and their inclusion on the United Nations' blacklisted artists. Following the criticism, Queen strongly defended their decision but donated to a school for the deaf and blind to prove their philanthropic values.[4] In the late 1980s, Queen's song "We Will Rock You" was used as the sound track to Sun City's 60 second video promo, which was shown as commercial on SABC-TV and also when opening shows in Sun City's Superbowl auditorium .

In 1985, E Street Band guitarist Steven Van Zandt made the venue the focus of his music-industry activist group, Artists United Against Apartheid. Forty-nine top recording artists collaborated on a song called "Sun City", in which they pledged they wouldn't perform at the resort because of their opposition to apartheid. Additionally, Simple Minds included the song as part of a live medley on their Live in the City of Light double album in 1987.

Sun City has continued to flourish since Bophutatswana was re-incorporated in the new South Africa in 1994.

The resort has four hotels:

In addition to the four hotels, the complex includes time-share facilities called "The Sun City Vacation Club" which is a popular self-catering facility.

The Lost City Golf Course is noted for the 38 crocodiles in the water feature of the 13th hole.

The Sun City resort has hosted various concerts and events, including the Miss South Africa and Miss South Africa Teen Pageant. These pageants take place annually in Sun City's Super Bowl Arena and the Valley of Waves. It also hosted Miss World pageant for five times, from 1992-1995 and 2001. Also held in the Valley of Waves is the Springbreak summer festival which sees flocks of holiday-making students from all over the country gather for up to 5 days of fun in the sun. The resort was also the site of the Sun City Agreement.

In 2001, Sun City was the site of the 2nd IIFA Awards. Held at the Superbowl Arena, it honoured both artistic and technical excellence of professionals in Bollywood, for that year.

In 2014, the movie Blended, with Drew Barrymore and Adam Sandler, premiered after being filmed mostly at the resort.

or http://www.yehudalave.com/
Posted by Rabbi Yehuda Lave at 2:40 PM