Each person thinks differently. If you have a problem and consult a number of people, you will hear diverse opinions. Therefore, after gathering all the different opinions, consult one wise person and present the various opinions you've heard. With his wisdom, he will be able to help you formulate a final opinion based on all the interviews you have conducted.

Even when making the final decision yourself, it is wise to ask different people for their opinions, to get a more comprehensive picture of your options.

Today, pick a problem… and ask around! However, it is very rude to ask another person's opinion in front of another person you just asked.

It make them feel like they are chopped liver.  I am very sensitive  and concerned about giving my time to someone to give them an opinion, when they ask for it. I give my life and soul and heart into making sure I treat them as myself, as the Torah tells us to do.

If they want another opinion from someone else to form a better one for themselves, great, but don't do in front of me, be sensitive.


In 2005/6 I made a visit to the Temple mount and has a nice quiet tour...compare that to what was going on Sunday morning September 13, 2015, Rosh Hashana Eve

Police have confirmed they found pipe bombs that could be filled with explosives at the Al-Aqsa mosque,
By: Tzvi Ben-Gedalyahu
Published: September 13th, 2015 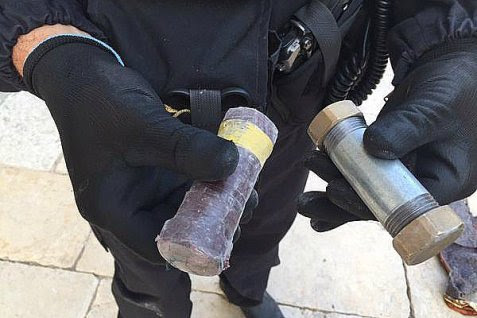 Masked Arab rioters had prepared pipe bombs to be filled with explosives in a planned pogrom against Jews and non-Jewish tourists on the Temple Mount Sunday.

Masked protesters who were inside the mosque threw stones and fireworks at police. Suspect pipes that could be filled with homemade explosives were also found at the entry to the [Al Aqsa] mosque.

Police later removed any doubts that the objects were not pipe bombs.

Public Security Minister Gilad Erdan said the presence of pipe bombs at the on the Temple Mount "requires all of us to think again about arrangements" at the holy site.

Almost exactly a year ago, violence on the Temple Mount appeared to be on the verge of an all-out religious war, but a secret meeting between Prime Minister Binyamin Netanyahu and Jordan's King Abdullah resulted in a mutual understanding that Jews would continue to be prohibited from praying on the Temple Mount and Arabs Muslims would put a stop to violence.

Jordan's reaction to today's clash ws not encouraging, and the Kingdom blamed Israel for "raiding" the mosque.

An AFP journalist saw a number of people being detained and heavy police deployments in the Old City.

A Palestinian boy identified as Anas Siyam was evacuated to hospital after he was hit with a rubber-coated steel bullet in the chest. His condition is unknown….

A spokesman of the Palestinian Authority's Fatah movement in Jerusalem, Raafat Ulayyan, urged the Palestinians in the West Bank and in Israel to 'hurry to defend' the holy Muslim place from which 'our prophet Muhammad ascended to heaven.' 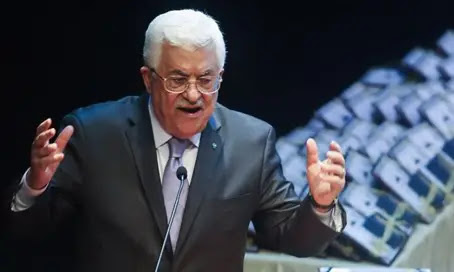 "The presidency strongly condemns the attack by the occupier's military and police against the Al-Aqsa mosque and the aggression against the faithful who were there," a statement from his office said.

Earlier Sunday, masked Muslim rioters hurled rocks and fireworks at police on the Temple Mount, as well as firebombs near two entrances to the site. Jerusalem District Police and Border Police were forced to respond with riot dispersal measures.

No injuries were reported during the clashes.

The Temple Mount, on which the mosque stands, is the holiest site in Judaism. Arabs have repeatedly tried to erase the Jewish nature of the site, where the First and Second Temples stood, by destroying ancient Jewish artifacts and building illegally.

Enforcing Israeli law at the site has been made difficult by the arrangement Israel has with Jordan over the Mount; the site is under the iron grip of the Jordanian Muslim Waqf, despite Israel liberating the Mount in 1967, and under the deal Jews are banned from religious worship there.

Arab children are still being taught to hate and destroy Israel.

Jews don't exist. The Western Wall is Islamic property. The Torah and Talmud are fabricated.

These are not the ravings from a lunatic; as of this year, they're "facts" taken from new textbooks in use throughout Gaza.

Hamas, which administers most of Gaza's schools, has made a few changes in the way the schools are run. Modesty patrols now monitor college campuses. Gaza high school students can take military training as an elective. And contact between any school in Gaza and one in Israel is now a criminal offense.

The New York Times reported on November 4, 2013 some of Hamas' educational initiatives. The new curriculum is Hamas' latest salvo in the cultural war it's waging in Gaza. History is being rewritten – the new textbooks don't mention key recent events like the Oslo Accords – and take demonization of Israel and Jews to new lows.

The goal, according to one Hamas educational advisor, is to prepare children to "resist" Israel. (Jerusalem Post, 5/22/13)

Israel, they learn, is a racist country, and wants to drive all Arabs out of Iraq, Syria and Turkey. (Turkey is not an Arab country, but that didn't seem to deter Hamas educational officials.) Hamas' history is also rewritten: it emerges as a heroic resistance movement. Even current history is being rewritten: kids are learning (erroneously) that as recently as last year, Hamas rockets launched from Gaza hit Tel Aviv, and "forced the Zionists to beg for cease-fire."

These are hardly the statements of a progressive, peace-seeking movement.

Yet, incredibly, Hamas continues to enjoy funding donated from an array of foreign governments and charities. In 2012, the European Union confirmed that it would continue funding the Palestinian Authority as usual, despite its new pact with Hamas, an EU-designated terrorist group. In lifting its six-year-old ban on funding Hamas, the EU expressed its expectation that the new joint government would be commitment to non-violence. Hamas is now allowed to share in EU funding directed to the Palestinian Authority, an amount that exceeds 50 million Euros each year.

Hamas' latest textbook is only the latest in a series of biased educational curricula adopted by Palestinian leadership and supported by western governments.

Examples of troubling material in Palestinian Authority educational material abound. Maps without Israel on them are common. And while student are taught to envisage a world without Israel, Israel's creation is described – in one 12th grade textbook – as a "catastrophe that is unprecedented in history."

Some Palestinian Authority texts glorify violence and death. An 8th grade reading book, in use since 2006, contains an ode to "heroes": "Your enemies seek life, while you seek death", while a 6th grade Arabic textbook asks students to read a poem The Martyr: "I shall carry my soul in my palm and toss it into the abyss of destruction…." (Texts translated by Palestinian Media Watch).

The 2011 matriculation exam for Palestinian Authority-run high schools asked students to punctuate phrases such as "we shall die in order that our land shall live" and "do not view the occupier as human" (reported in Ramallah-based newspaper Al Ayyam May 3, 2011).

A third major organization running Palestinian schools is the United Nations Relief Works Agency (UNRWA). The UN defines aiding development as "enlarging people's choices" and "expanding human capabilities". You'd think that schools run by its agency would promote moderation but, sadly, this is not always the case.

There have been several instances of high-profile Hamas officials and even fighters working in UN schools. In 2008, a deputy headmaster and science teacher at the UNRWA-run Rafah Boys Prep School in Gaza was killed in an Israeli airstrike. It turned out this UN employee had also worked as a rocket engineer for the extremist group Islamic Jihad for eight years. After his death, Islamic Jihad hung a poster celebrating his martyrdom at the entrance of the UN school where he worked. (Jerusalem Post 8/21/11)

In 2009, according to the Jerusalem Post, the teachers union at UNRWA schools voted to pass control of their school curricula in Gaza to the ruling Hamas regime.

The United States, European Union, and others have a real interest in encouraging peace in the Middle East. In announcing that it would fund the new Palestinian Authority-Hamas government, the EU declared that it looked "forward to continuing its support, including through direct financial assistance, for a new Palestinian government that should uphold the principal of non-violence."

Yet Hamas' new textbooks – and other Palestinian books and schools that encourage hostility and celebrate bloodshed – are anything but non-violent.

Hamas' new textbooks betray the very students they educate. Instead of giving Gaza's children the skills they need to succeed in the 21st century, they are re-writing the history of the past. Instead of helping the region's children understand the world around them, they are cruelly limiting their capacity to change that world for the better.

In 2010, then Israeli Deputy Foreign Minister Danny Ayalon, responded to similar criticisms that Palestinian textbooks were biased and incited violence: "We are grateful for European aid, and without aid from the US and Europe there would be no chance of peace, but since the Oslo agreements were signed, the Palestinians have received more aid per capita than the people of Europe in the Marshall Plan after the Second World War and they have nothing to show for it. The money has either gone to terror or just isn't there."

One Israeli motorist was killed by rocks hurled at his vehicle while driving through southern Jerusalem on Rosh Hashana.
By: Hana Levi Julian
Published: September 15th, 2015 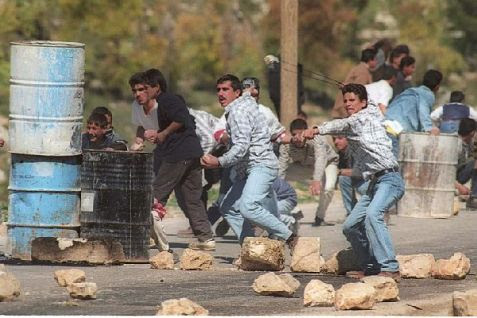 Suspected Arab rock throwers have murdered a Jewish Israeli motorist as he was driving late Sunday night in the southern Jerusalem neighborhood of Armon Hanatziv.

Prime Minister Binyamin Netanyahu has called an "emergency meeting" of the Security Cabinet to discuss the upswing in Arab rock-throwing and firebombing attacks.

"The prime minister views with great severity the phenomenon of rock-throwers and throwers of firebombs at Israeli civilians and intends on combating this using all measures, including the stepping up of punishments and enforcement," said a government official.

Alexander Leiblovitch, 64, was driving the vehicle when it was hit by a barrage of rocks and careened out of control, striking an electricity pole at around midnight.

"The driver who was involved in the accident… apparently as a result of rock-throwing … died at Hadassah Ein Kerem Medical Center," she told media.

Two other passengers were also injured in the crash, albeit less seriously. The group was returning home from a celebration to mark the start of the Jewish New Year, Rosh Hashana.

I came across the movie Taras Bulba from 1962.

or http://www.yehudalave.com/
Posted by Rabbi Yehuda Lave at 10:06 AM