One of the reasons I chose to become an Orthodox Jew was the fact that the Jewish people are the witnesses that G-d came to Moses on Mount Sinai and gave Moses the ten commandments that changed the world.

Although Orthodox Judaism looks like a cult to outsiders, and in truth many people in the movement are there as cult members, those of us that chose to live the live style do it for the intellectual understanding (and that includes me), that this is how we are supposed to walk in G-d's way..TO BE A HOLY PERSON.

Now some of our greatest Jewish  thinkers are under attack. Shmuely Botech whose article I attach and Nathan Slifkin who writes about science and the bible, dare to look at the bible and use modern thought and science to try to understand what G-d has to say to us.

Talabad type thinkers in Orthodox Judaism are so threatened by asking questions they are attempting to kill the messenger.

All that it takes for evil to flourish is for no one to speak up for good...I ask you to be open minded and read Shmuely's article..One doesn't have to agree with a writer to completely to stand up for his right to say what he has to say. As Voltaire said,
"I disagree strongly with what you say, but I will defend to the death your right to say it."

No holds barred: Chabad fanatics are destroying the movement

We need grass-roots activists to build mikvahs and synagogues, and to look after special-needs children, like Friendship Circle. 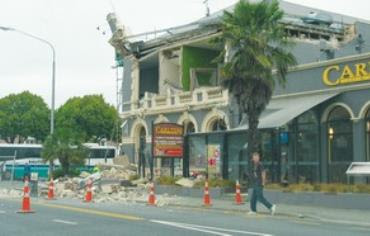 RUBBLE OF what had been Christchurch Chabad House Photo: Jehuda Nitke/Chabad.org

JOHANNESBURG, South Africa – Of late I have found myself a target of Islamic extremist websites and Iranian activists around the world. As one of Israel’s more high-profile defenders in American media – and one of Iran’s most strident critics – I have received death threats and repeated condemnation in Israel-hating outlets across the globe.

So when I was invited again to lecture in South Africa, a benevolent nation whose government has unexpectedly emerged as one of Israel’s harshest critics, followed by a major debate in England at the Oxford Union on Iran, I knew that I would come in for more of the same.

What I did not expect was that my most strident critic on this trip would not be an Islamist fanatic but a Jewish one – my own former yeshiva head from Los Angeles, Rabbi Ezra Schochet, part of a new breed of religious fundamentalists who are destroying the Chabad movement.

Since 1994 I have visited South Africa many times for lecture tours. On some occasions I was brought by my publishers to do national media tours on my books on marriage and relationships. On other occasions I was a guest of the Jewish community to address eroding support for Israel in an otherwise staunchly Zionist community.

I have watched this incredible country evolve from the end of apartheid when I first arrived to the multi-ethnic, harmonious society which has become an inspiration to the world.

I have also watched the standing of the State of Israel slowly devolve as more and more South Africans accept the superficial comparison of Israel as an apartheid state.

The popularity I have been fortunate to earn in South African media as a promoter of the family – and few continents love family as much as Africa – has allowed me to emerge as a credible defender of Israel explaining that we Jews, as the Christian Bible makes clear, are analogous to Black South Africans as the indigenous people of the Holy Land who were invaded by a white, oppressive, European, colonial power who destroyed our temple, murdered us, and exiled us from our land. For 2,000 years we have prayed to return, never losing contact with our soil.

And now that we have come back and rebuilt our country, we granted equal citizenship to our Arab brothers and sisters who came to the land over the centuries in our absence, when we Jews were forcibly denied entry, and who have, even more so, come to Israel over the past century as Zionist pioneers have made the country more habitable and prosperous.

Fast-forward to my lecture tour this week as a guest of Johannesburg’s largest congregation, Sydenham, headed by one of the world’s most successful communal rabbis and orators, Yossi Goldman, where I spoke to more than a thousand people.

Today, out of the blue, I started hearing from friends that Rabbi Ezra Schochet, head of the Chabad Yeshiva in Los Angeles, had written to the Beit Din of Johannesburg to say that “It is totally prohibited and unacceptable for orthodox Jews to hear someone like S. Boteach speak, since his views on many issues are against Torah and halacha.”

That was bad enough. But then Schochet did something truly astonishing.

Those of us who love Chabad and the Jewish intellectualism it has represented for centuries have been pained and appalled to witness over the past few years how two vapid, insipid, gossip-mongering and illiterate websites – who trade in daily attacks on leading figures in Chabad and beyond – publish drivel that contravenes all Jewish standards of decency and values, but have nevertheless become the de facto news outlets for the global Chabad movement.

Rabbi Schochet actually sent a statement to these websites attacking Rabbi Goldman, one of South Africa’s most esteemed religious leaders, as “a Lubavitcher hassid” who has committed a “chilul hashem,” a desecration of God’s name, and fought “an active war against the Rebbe and everything the Rebbe promoted and stood for.”

Surely Rabbi Schochet is aware that he is funded by the Jewish community of Los Angeles, to the tune of millions of dollars a year, to run a yeshiva and not a Taliban madrassa. His disgusting assault is an insult to all the hard-working financial supporters who expect him to graduate students who spread love and not hate, acceptance and not attacks, Jewish light rather than odious darkness.

This same Rabbi Schochet is the brother of Rabbi Immanuel Schochet, who banned my book Kosher Jesus without ever citing a single textual source or reason, even as the book brought back so many Jews who had been lost to Christianity. Rabbi Schochet was extremely ill at the time and would tragically die a few months later. Many were puzzled that he would suddenly malign a book that was widely praised as a powerful response to Christian missionaries, so much so that entire books have now been published by leading Christian scholars responding to my arguments against the divinity of Christ and the founding of a new faith.

“Chabad” translates literally as “Wisdom, Understanding and Knowledge.” The Rebbe himself was a world-class intellectual, with encyclopedic knowledge of both Jewish and secular texts.

Sadly, this air of intellectual sophistication is being lost to Chabad with fanatics and extremists like Rabbi Schochet rising to prominence amid the dearth of scholarly leadership. Religious extremism always thrives in a vacuum. Chabad continues to be the most successful Jewish outreach organization in the world. But everyone in the movement is aware of the acute shortage of Chabad writers, thinkers and intellectuals as an emerging and bullying thought police attempts to enforce suffocating doctrinal purity and rigid academic conformity.

Their methods are harsh and immoral.

When they set their sights on people like me who believe that Judaism must illuminate the modern world, they go after not us, but our children. They try to ban our kids from attending Chabad schools, and when that doesn’t work they even try and stop people from dating and marrying our offspring.

The loser, of course, is Chabad, which is producing outstanding fundraisers and organizational heads but is experiencing a diminishing intellectual life. Chabad is world-famous for outreach and programming.

But just a generation ago, in the Rebbe’s lifetime, Chabad was producing world-class orators and thinkers who resuscitated Jewish life not just with buildings but with the power of Jewish ideas. Both are necessary.

We need grass-roots activists to build mikvahs and synagogues, and to look after special-needs children, like Friendship Circle.

But we also need broadcasters, authors, lecturers and debaters who bring Jewish values to millions through the power of the global media. The Jewish people are meant to be not just the group that opens outposts throughout the world. Their biblical mandate is to be a light unto the nations.

Accusing scholars of veering from halacha without citing a single example is a form of intellectual tyranny that cuts against the grain of Jewish love for learning.

I joined Chabad as a boy. The Rebbe’s warmth and genius won me over, as did his worldly sophistication, polish and refusal to judge less observant Jews.

At the age of 14 I became a student at Rabbi Schochet’s yeshiva and would eventually win top prizes in both Jewish and secular studies. Now, this man who educated me is calling me a heretic because I dare to say that gay Jewish men should be encouraged to put on tefillin and keep the Sabbath as opposed to just being ostracized as an abomination. If he’s right that I am a heretic to orthodoxy he should be capable of easily defending his revolting allegations in an open and public debate, to which I challenge him, before a public audience of his own choosing.

If he denies me the right to defend myself, then you know what this is. A great intellectual movement, built by the Rebbe, which is slowly, like too many other religious movements, being taken over by ignorant, radical fundamentalists who exercise power through character assassination and then hide like cowards after shooting their arrows.

The author, who Newsweek and The Washington Post call “the most famous rabbi in America,” is the only rabbi to have won the London Times Preacher of the Year competition and is the international best-selling author of 30 books. In May he will publish Kosher Lust: Love is Not the Answer.

or http://www.yehudalave.com/
Posted by Rabbi Yehuda Lave at 3:49 PM