CAR PROBLEM and Naftali Bennett states his side

While you should try to protect yourself from harm, if you do suffer, the best tool is acceptance.

Accepting your situation greatly minimizes the amount you actually suffer.

The most unfortunate person in the world is one who has not learned how to accept setbacks and misfortunes.

Either this day or the next he, like everyone else in the world, will inevitably drink from the cup of suffering, which is either a test or an atonement.

By failing to accept suffering, the pain you feel will be much more acute and harsh than necessary.

These photos are from Thursday, Feb. 17 by someone from Centurion in Pilanesberg game reserve,South Africa. The guy in the white Volkswagen was trying to pass the elephant. 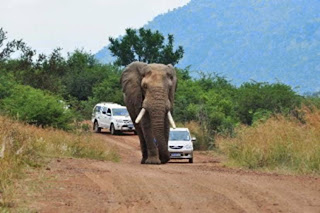 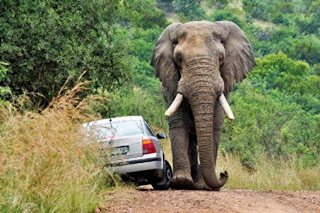 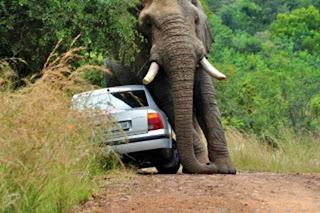 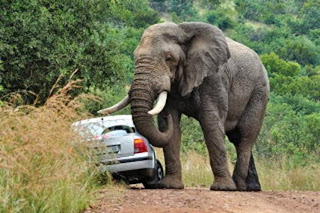 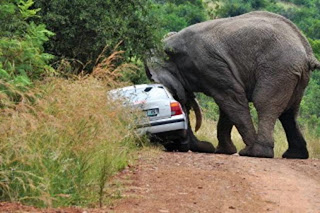 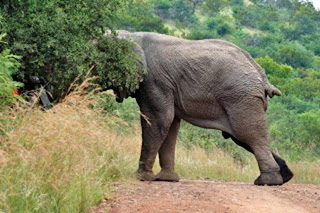 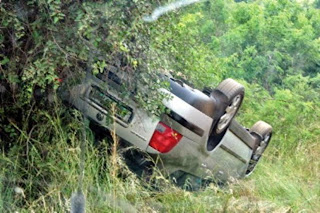 Road rage, it affects us all

Bennett Asks Indyk: How Many Need to Die Before You Wake Up?

In a heated portion of the dialogue, Bennett asked Indyk: "How many people need to die before you wake up?"

"I believe that the last summer moved anywhere from 10% of Israelis moved from the left to center, and from center to the right," Bennett stated, referring to public feelings in the wake of Operation Protective Edge last summer.

"It wasn't a two day thing, but a fifty day thing. People felt to some degree helpless...these missiles and rockets were fired from the very place we did things right."

Bennett then began discussing his "imperfect, but active" solution to the Israeli-Palestinian conflict, which includes the annexation of area C of Judea and Samaria into Israel. All Palestinians living in that area will then be offered citizenship or permanent residency.

Referring to the division of Jerusalem, Bennett stated, "The last thing the Arabs of Jerusalem want is to live under the corrupt and dysfunctional rule of the Palestinian Authority."

Opinions are divided on Judea and Samaria, he added. "The reality is that the solution we have discussed in the last three decades is not working. Why don't we take the money being invested in the industry of peace and conferences, and invest it in making the lives of Jews and Arabs better?"

"No one is going anywhere - neither are we, nor are they. We should be working to improve what there is." He added, "maybe this is not the perfect solution but we should not chase after perfection that will lead us to disaster."

'Undo the years of nonsense'

"There's a process of changing the global view of what's going on here," Bennett told Indyk, who asked if he could deal with the consequences of his solution to the conflict, which might include an international boycott of Israel.

"We have to undo the years of nonsense that the peace industry has fermented, which led us to the position where the world thinks we are occupiers in our own land."

"Israel has to identify what it's true values are," Bennett stressed.

Earlier in the conversation, Bennett discussed his relationship with Israeli Prime Minister Binyamin Netanyahu and their "arrangement" not not to attack each other during the campaign for the 2015 elections.

However, Bennett did note that he "was critical and I still am critical of [Netanyahu's] policies. He supports a Palestinian state and I oppose it. I thought that in many cases he made mistakes [during Operation Protective Edge] and I told him, and sometimes publicly, when I thought it might influence."

Yet, when asked if he thought he would become prime minister, Bennett demurred, instead saying he has a lot to learn and that he's "not obsessed with becoming prime minister."

Bennett, who was inspired to join politics after the Second Lebanon War in 2006, stated that "the mission of my party is to restore the Jewish soul to Israel."

Despite this being one of the most chaotic elections he can remember, Bennett emphasized that he continues to envision Israel as "a lighthouse standing in a Muslim storm."

Here is the video worth watching

Here is a view from the other side:


Preacher in Al Aqsa: We Will Slaughter You Jews

NOW FOR SOMETHING MORE POSITIVE

At his 103rd birthday party, the Rubenstein family gathered around Zadie Hymie for cake and words of wisdom.

"So Zadie," asked little Stevie inappropriately, "Are you going to be around for your 104th Birthday party"?

"I certainly will," Zadie replied.

"How can you be so sure?" Stevie asked.

"Well," Zadie replied, "Statistics show that very few people die between the ages of 103 and 104

or http://www.yehudalave.com/
Posted by Rabbi Yehuda Lave at 2:39 PM