Before you complain, think carefully to determine if your complaint is valid.

When interacting with the people you see frequently, even if your complaint is valid, be certain to praise more frequently than you complain.

Just received this from London:


I was fed up with being burgled every other day in my neighborhood. So, I tore out my alarm system & DE-registered from our local Neighborhood Watch.
>>>
>>> I've planted a Pakistani flag in each corner of my front garden and a large Black Flag of ISIS in its center.
>>>
>>> Now, the Yorkshire police, the National Security Bureau, Scotland Yard, MI-5, MI-6, the CIA and every other intelligence service in Europe are all watching my house 24x7x365.
>>>
>>> My children are followed to school every day and my wife when she goes shopping.  I'm followed to and from work every day.  So no one bothers me at all.
>>>
>>> I've never felt safer.
>>>
>>> All Thanks to Islam

Enjoy...some of these are quite good...

I was at this lighting on the first night


Light Will Win' at Jerusalem Chanukah Ceremony for Fallen Soldiers

A powerful menorah-lighting attended by 1,000 people to honor lives lost in summer's war

The families of five young IDF soldiers from Jerusalem who were killed this summer in the Gaza war, joined by more than 1,000 Israelis and visitors, gathered near the Jaffa Gate to the Old City on Tuesday night—for a very moving ceremony on the first night of Chanukah.

A huge Chanukah menorah was constructed in the Mamila Mall under the direction of Rabbi Eliyahu Canterman, co-director of the Chabad Center of Talbiyeh in Jerusalem. He invited the Chabad Terror Victims Project (CTVP) to take part in the menorah-lighting, asking to bring the families of the five Israel Defense Forces soldiers from Jerusalem—Sgt. Dor Derei, Staff Sgt. Liel Gidoni, Staff Sgt. Moshe Malko, Capt. Dimitri Levitas and Lieut. Natan Cohen—who were killed during this summer's war with Hamas in Gaza to be the guests of honor.

All five families came, bringing 25 people in total to the event, with its theme "Light Will Win." More than 1,000 Israelis and visitors crowded the mall to observe the ceremony.

There were tears in the eyes of those present as Rabbi Yossi Swerdlov, associate director of CTVP, read the names of the five soldiers aloud and spoke to the crowd that had assembled.

"We gather here tonight to remember these holy souls and to stand with the families in solidarity," he said. "Our message to them is a message of light, warmth and love. May G‑d give the families comfort, and may their loved ones' neshamas [souls] have a true Aliyah. We are with you and give you a big virtual hug. We want you to know that Chabad is with you, the people of Israel are with you, Am Yisrael is with you." 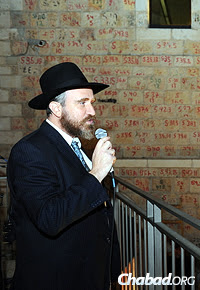 "The message of Chanukah is one of light. We are told that a little bit of light can push away a lot of darkness," he said. "Tonight, we honor you with the kindling of the menorah, to help show the world that light overcomes darkness."

The words of inspiration were followed by festive dancing led by brothers Jonathan and Aaron Razel, who played Chanukah songs and brought families into circles to dance.

The evening ended with Canterman and his wife, Chana, thanking CTVP for bringing the families, and thanking the families for the honor of being able to host them. CTVP took the families and others out afterwards for a festive meal at Café Rimon on the mall. 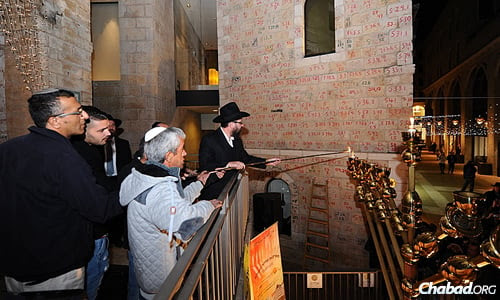 A total of 72 families lost a loved one in the summer war, and the lighting was in all of their memories. CTVP has made it a point over the eight-day holiday to visit each city where families suffered a loss.

Staff will also spend time with many of the more than 3,000 families they are assisting who have been affected in past wars and terror attacks, bringing them comfort and strength, and lighting Chanukah candles with them. 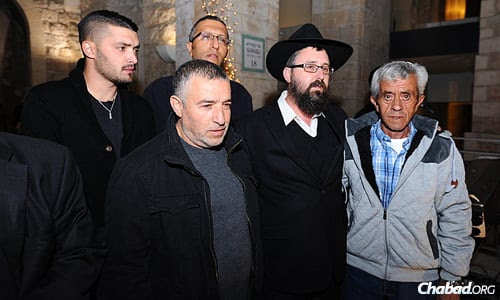 Families of the fallen take in the candles and the theme, "Light Will Win." (Photo: Mendy Hechtman) 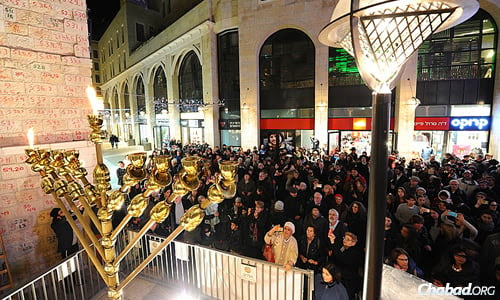 More than 1,000 people observed the ceremony on the first night of Chanukah. (Photo: Mendy Hechtman) 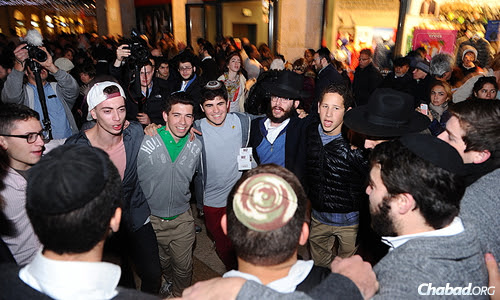 The event ended with dancing in the streets. (Photo: Mendy Hechtman) 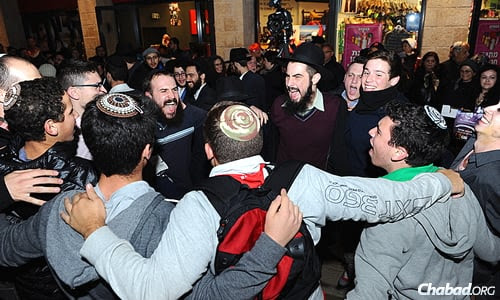 And here is how I spent the 7th day and the 8th night..A trip to Modian to see the graves of the Hashmonim-- note the cute kids at the end:

or http://www.yehudalave.com/
Posted by Rabbi Yehuda Lave at 9:56 PM