Dilbert's Laws of Work and Eight rules for successful work instead

As a Child to his Father

The Chafetz Chaim  (one of our great sages from the past century) used to say that when you feel heavy-hearted, speak to the Almighty just as a child speak to his father.

One does not need formal prayer for this. Rather speak to your Heavenly Father in any language you wish.

Israel Magician stands in the air:

A pat on the back is only a few centimeters from a kick in the rear.

You can go anywhere you want if you look serious and carry a clipboard.

Eat one live toad the first thing in the morning and nothing worse will happen to you the rest of the day.

When the bosses talk about improving productivity, they are never talking about themselves.

If at first you don't succeed, try again. Then quit. No use being a fool about it.

Everything can be filed under "miscellaneous."

Never delay the ending of a meeting or the beginning of a cocktail hour.

To err is human, to forgive is not our policy.

Anyone can do any amount of work provided it isn't the work he/she is supposed to be doing.

You are always doing something marginal when the boss drops by your desk.

People who go to conferences are the ones who shouldn't.

If it wasn't for the last minute, nothing would get done.

When you don't know what to do, walk fast and look worried.

When confronted by a difficult problem you can solve it more easily by reducing it to the question, "How would the Lone Ranger handle this?"

No matter how much you do, you never do enough.

Has anyone asked Obama why Netanyahu should even think about agreeing to a Palestinian Authority country?
By: Tzvi Ben-Gedalyahu
Published: March 27th, 2015 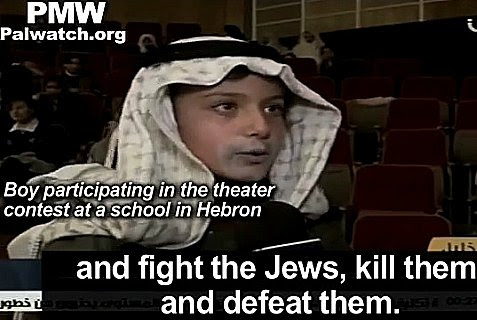 Palestinian Authority media and schools have escalated incitement of violence against Israel by interviewing children who justify killing Jews for the objective of boycotting Israeli products.

Of course, if the children kill all the Jews, there won't be any Israeli products to boycott, and that is precisely the point.

Palestinian Media Watch (PMW) translated and published a video of an official PA broadcast of a Hebron school's theater activity aimed at promoting a boycott against Israel.

One charming boy, with a kefiyeh headdress, said:

A PA television reporter explained to anyone, such as the U.S. State Dept., who might not understand what was going on, "Instilling the culture of boycotting occupation products in the hearts of children and adolescents was the goal that led the Ministry of Education to place this issue at the center of all school activities throughout the homeland… Through creative activities, [students] expressed different views about support for national products and resistance through boycott.

It is no wonder that Palestinian Authority children think the way do. PMW pointed out that the Palestinian Authority Ministry of Education last year "held a sporting event named after a terrorist who placed a bomb in a refrigerator in the center of Jerusalem, murdering 15 and injuring 60."

Also last year, "The Minister of Culture last year presented an award at a cultural event to Egyptian poet Hesham El-Gakh after he read his poem with the words 'our enemy is Zion, Satan with a tail.'"

The head of the PA Sports Authority sponsored a ping-pong tournament named after Dalal Mughrabi, who led a bus hijacking that ended with the murder of 37 Israelis.

Boycotting Israel justifies killing Jews, ping-pong honors terror, poetry is awarded for defining Zion as Satan, athletic events memorialize terrorists, and the Obama administration insists that peace will come to Israel when it runs out of Judea and Samaria and half of Jerusalem.

President Obama has to think that way. Otherwise, how could he justify sending American taxpayers' dollars to the PA?

or http://www.yehudalave.com/
Posted by Rabbi Yehuda Lave at 5:02 PM