When you evaluate something as negative, awful, tragic, or a misfortune, you will feel sad, depressed, miserable, angry, or full of anxiety.

When you think that something does not affect you in any way and are apathetic to it, you will feel neutral.

When you evaluate something as good for you, you will react with happiness and joy.

It takes practice and effort, but ultimately the choice is yours.

Today, try reacting to one "negative" thing with joy.

What could have been by Berel Wein

I should not be surprised.  If 80% of our brethren chose not to leave Egypt after the empire was decimated.  If 80% of American Jews vote for someone the likes of Obama.  Stands to reason staying in Europe is the logical step.

As Albert Einstein said in his definition of insanity...doing the same thing over and over again, making the same mistake, and expecting different results.

Now for something completely different!!

In Kings With Straw Mats, Ira Cohen is both participant and observer to an extraordinary parade of people on pilgrimage into the heart of one of India's greatest sacred celebrations, the Kumbh Mela. With the eye of a filmmaker and the voice of a poet, Cohen introduces an array of holy men as they gather for the event, which occurs only once every 12 years. The Kumbh Mela traces its origin to a Hindu legend, which tells how four drops of the gods' holy elixir fell to earth from a "kumbh," or pitcher, during a battle with jealous demons fighting in the heavens. The celebration takes place at the point where the drops are said to have fallen to earth. The film examines the event's frenzied blend of showmanship, religious devotion, and madness.

The 4 Cups of Red Wine That Can Save Your Life 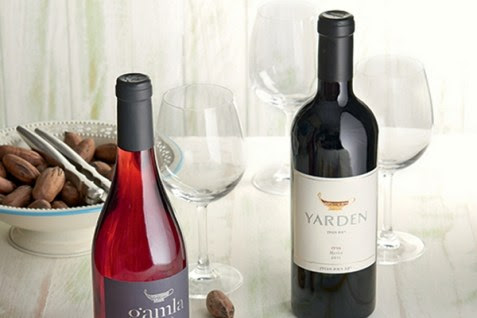 This Pesach, if your four glasses at the Seder table contain an Israeli Red Wine, you may be ensuring a clean bill of health.

Research, released by researchers from the University of Leeds, UK, reports that resveratrol, a chemical found in red wine, may halt Alzheimer's disease progression. Initial findings were produced in an early-stage laboratory setting but they pave the way for further investigation in this area. This latest research has added yet another dimension to the healing properties of red wine which for years have been studied in Haifa, Israel.

Professor Aviram is a distinguished scientist who has been revolutionising cardiovascular medicine in his 32 years on the Technion Faculty and as Director of Rambam Hospital's Clinical Research Institute. Professor Aviram's chief area of research for the past 32 years has been the investigation of "bad cholesterol" (LDL) and its formation to cause atherosclerosis (thickening and hardening of the arteries) which leads to heart attacks and strokes.

Professor Aviram discovered that in addition to excessive levels of LDL cholesterol in the blood, oxidization of cholesterol molecules by exposure to harmful entities such as smoke, pollution and even viruses can be just as harmful. The solution: antioxidants which can block the oxidation of cholesterol and other fats.
"In the last 25 years I have studied over 100 different fruits, vegetables, beverages and wines to find out the health benefit of these magical molecules," he said. "Most of the antioxidants that I found were present in the skin of the fruit. The most cardio-protective foods, I discovered, were pomegranate, red wine and olive oil".

Professor Aviram and his team initially published their findings on the unique properties of red wine in 1995 and since then, their paper has been cited over 600 times in further research. It is the skins of the grape, left in the juice during fermentation, which cause the red color of the wine and which also give the wine its powerful antioxidant qualities. A glass of red wine at meal times has been demonstrated to reduce the levels of oxidised bad cholesterol in the bloodstream and thus the potential for developing atherosclerosis.

Recently, it was discovered that Israeli wine had five times the amount of a potent antioxidant than the relative UK wine studied. The study suggests that it may be the high levels of sunlight which aids antioxidant production in the grapes grown in Israel.

"We are incredibly lucky here in Israel," explained Yael Gai of the Golan Heights Winery. "Our vineyards are spread across the Golan at varying altitudes and geographical conditions. We have perfected the latest technology to allow us to exploit the fantastic sunshine and variety of temperatures available to us."
There are now more Israeli wines on the market than ever before and there has been a host of Israeli red wines wining international prizes this past year, including the 2008 Yarden Cabernet Sauvignon and the 2009 Galil Mountain Alon which both won awards at the Decanter Awards in London.

Israeli red wines come at a variety of prices to suit a range of budgets. The Mount Hermon Red is Israel's bestselling wine owing to its popularity amongst wine connoisseurs and novices alike. It is a very affordable, medium bodied and fruity wine making it a great addition to the Seder table. At the other end of the budget, there are a host of limited edition, single vintage wines which will wow guests with their unique flavors.

Whatever Israeli red wine you chose to serve this Pesach, drunk in moderation, it is reassuring to know that this treat may be keeping you healthy in addition to tantalizing the taste buds.

About the Author: Anna Harwood made aliya to Israel two years ago from London, England. She writes for the Jewish and international press about issues pertaining to Israel, ranging from scientific breakthroughs to award-winning wines.