The Fabulous 1940's and when American Ambasadors were still untouhable

Every hour on the hour, create an inner mental cheer for being alive. Hear an inner enthusiastic voice shouting, "It's great to be alive!" Imagine a stadium crowd cheering for your being alive.

When you control your anger or other character trait you're working on, see and hear the same immense crowd cheering for you!

When American Ambassadors Were Still Untouchable

The growing revelations that the Obama State Department watered down public statements on the attack in order to cleanse them of any mention of al Qaeda and terrorism is a travesty.
By: Rabbi Shmuley Boteach
Published: May 17th, 2013 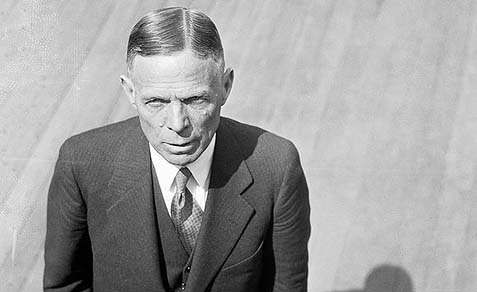 William Dodd, the United States ambassador to Germany, in 1934.

I just finished one of the best books I've read in a long time, In the Garden of Beasts by Erik Larson, which tells the story of Ambassador William Dodd, President Roosevelt's first Ambassador to Hitler. The book chronicles the slow descent of Germany into Nazi tyranny. One of the most striking features of the narrative is the fear that slowly descends on the German populace as they become terrified of ever expressing an opinion about Hitler and his police state even in the company of close family and friends.
Yet Dodd and his family were utterly immune to such fear. Though they lived in a home that was owned by a Jewish banker; though they regularly hosted journalists who wrote critically of Hitler; though they drove by the home of Franz Von Papen – the deputy Chancellor –  to show their support even after he had been placed under house arrest by Hitler for his Marburg speech of June, 1934; though Dodd openly snubbed Hitler every year by refusing to attend the Nazi Nuremberg rally where Hitler was celebrated as a god, Dodd never had anything to fear. He did not have to worry that the S.A. would ransack his Berlin home in the middle of the night. He did not have to fear that his daughter Martha, who even had an affair with Gestapo head Rudolf Diels, would be summarily shot for her increasing disillusion with Hitler's regime. He did not have to fear that the SS would arrest him on his frequent walks through the Tiergarten for a speech he gave on that made subtle reference to Hitler's growing assault on freedom. And he did not have fear that roaming bands of Nazi thugs would attack him for his protests to the German Foreign Minister against unprovoked attacks that threatened the lives of Americans.
And why didn't he fear? Because even a monster as evil as Hitler, arguably the most dangerous man that ever lived, wasn't going to mess with the American Ambassador.
In fact, one of the stories told in the book is the day that Dodd took a walk with French Ambassador André François-Poncet in the Tiergarten when the latter told him he would not be surprised if he would be shot in the street by the S.S.
Dodd was astonished. It never occurred to him to ever worry so long as he was the American Ambassador and indeed Hitler and the Nazis never harassed Western Ambassadors.
It therefore matters that just 80 years later a bunch of terrorist thugs can think they can murder an American Ambassador in full site of the world without consequence. American diplomatic staff were once the safest people in the world, representatives of a superpower who would rain hell from the skies should you touch one of their diplomatic staff. But no more.
The growing revelations from the Congressional hearings on Benghazi that the Obama State Department watered down public statements on the attack in order to cleanse them of any mention of al Qaeda and terrorism is a travesty and shows a lack of moral will to give evil its proper name. ABC News and Fox News reported this past Friday that the departments talking points were revised a full 12 times to purge them of any mention of terrorism. State Department spokesman Victoria Nuland asked the CIA to remove mention of their own security warnings about Benghazi.
According to ABC News the original paragraph read,


The Agency has produced numerous pieces on the threat of extremists linked to al Qaeda in Benghazi and eastern Libya. These noted that, since April, there have been at least five other attacks against foreign interests in Benghazi by unidentified assailants, including the June attack against the British Ambassador's convoy. We cannot rule out the individuals has previously surveilled the U.S. facilities, also contributing to the efficacy of the attacks.

But Nuland was concerned that the line "could be abused by members [of Congress] to beat up the State Department for not paying attention to warnings, so why would we want to feed that either?"
I have earlier written how  Ambassador Susan Rice was utterly inappropriate to be chosen as Secretary of State based on her efforts to disassociate the word genocide from the Rwandan mass slaughters of 1994 so as not to commit the Clinton Administration to intervention.
In a 2001 article published in The Atlantic, Samantha Power, author of the Pulitzer-Prize winning A Problem of Hell and arguably the world's foremost voice against genocide and who currently serves on the National Security Council as an aide to President Obama, referred to Ambassador Susan Rice and her colleagues in the Clinton Administration as Bystanders to Genocide. She quotes Rice in the 2002 book as saying, "If we use the word 'genocide' and are seen as doing nothing, what will be the effect on the November congressional election?" Rice's subordination of a human tragedy of epic proportions to partisan politic interests mirrors the current allegations of denying a terror attack in Benghazi for political gain.
Worse, the attempt to whitewash the Benghazi attacks as merely a protest that turned violent trivializes the death of Ambassador Chris Stevens and the three Americans murdered with him and threatens to cheapen the life of every American diplomat currently serving in dangerous posts. We need to accept that the fear the United States once instilled in those with evil intent against our diplomatic staff has worn thin and the only way to reintroduce that fear is to understand fully what happened in Benghazi and rain fire on the culprits so that this never happens again.

About the Author: Rabbi Shmuley Boteach, "America's Rabbi" whom the Washington Post calls "the most famous Rabbi in America," is the international best-selling author of 29 books, including The Fed-up Man of Faith: Challenging God in the Face of Tragedy and Suffering. Follow him on Twitter @RabbiShmuley.

(well maybe they weren't all that fabulous, but you will enjoy this plus other access to other movies on the site.

The 1940's ...Absolutely Fabulous
Here again we get to step back in time!
This is well done, a short history lesson.
Be sure to turn up the sound to catch all the great music, too.
Click on "The 1940s" It advances automatically.
The 1940s