Panda Cubs Playing and IRS after its opponents


An Attitude Of Gratitude 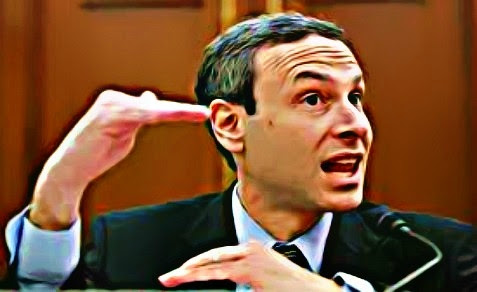 For more than a year the U.S. Congress has been investigating whether the Internal Revenue Service was inappropriately treating conservative groups seeking tax-exempt status, or burdening such groups with requests and demands which are impermissible, as many had claimed.
Friday, May 10, the IRS person in charge of the division dealing with non-profits, Lois Lerner, apologized for actions taken by the agency which were based on political affiliation.
"That was absolutely incorrect, it was insensitive and it was inappropriate. That's not how we go about selecting cases for further review," Lerner said at a conference sponsored by the American Bar Association.
"The IRS would like to apologize for that," she added.
How did the IRS do this?  By singling out dozens of organizations for additional reviews because they included the words "tea party" or "patriot" in their exemption applications, Lerner admitted.
The Ways and Means Committee has been seeking information on precisely this activity and "the IRS repeatedly denied they were targeting conservative grassroots organizations," said committee chair Dave Camp (R-MI) in response to the revelation.  He announced  that the committee will soon hold hearings on this now-admitted practice by the IRS.
Camp stated in a press release issued just after the admission of wrongdoing by the IRS, "The IRS absolutely must be non-partisan in its enforcement of our tax laws. The admission by the agency that it targeted American taxpayers based on politics is both shocking and disappointing. The Committee on Ways and Means will thoroughly investigate this matter and will soon hold a hearing to get to the bottom of this situation.  We will hold the IRS accountable for its actions."
PRO-ISRAEL GROUP SUED IRS CLAIMING TARGETING PRACTICE
While they are at it, the committee might want to ask the IRS whether their list of targets extended beyond political party discrimination. There is evidence the IRS also targeted pro-Israel groups whose positions were potentially inconsistent with the administration's.
For example, in 2010, the passionately pro-Israel organization Z STREET filed a lawsuit against the IRS, claiming it had been told by an IRS agent that because the organization was "connected to Israel," its application for tax-exempt status would receive additional scrutiny.  This admission was made in response to a query about the lengthy reveiw of Z STREET's tax exempt status application.
In addition, the IRS agent told a Z STREET representative that the applications of some of those Israel-related organizations have been assigned to "a special unit in the D.C. office to determine whether the organization's activities contradict the Administration's public policies."
Z STREET's lawsuit claims the IRS activity constitutes viewpoint discrimination and a violation of its constitutionally protected right of free speech.  The organization is seeking, among other things, complete disclosure to the public regarding the origin, development, approval, substance and application of the IRS policy to treat pro-Israel organizations differently than it does other organizations.
And at least one purely religious Jewish organization, one not focused on Israel, was the recipient of bizarre and highly inappropriate questions about Israel.  Those questions also came from the same non-profit division of the IRS at issue for inappropriately targeting politically conservative groups. The IRS required that Jewish organization to state "whether [it] supports the existence of the land of Israel," and also demanded the organization "[d]escribe [its] religious belief system toward the land of Israel."
For years the IRS has denied it took any such inappropriate actions and has done its best to prevent Z STREET from pursuing its claim of viewpoint discrimination. The IRS even took the position that because Israel is a country "where terrorism happens," the service was justified in taking additional time to determine whether Z STREET was involved with funding terrorism.  Z STREET is a purely educational organization that has never funded anything, either in Israel or anywhere else.
Coincidentally, after two and a half years of non-movement, the very first hearing in Z STREET v IRS was recently scheduled for the afternoon of Tuesday, July 2, in the Federal District Court of the District of Columbia.
Representatives of several tea party groups rejected the apology offered by the IRS, and insist that steps be taken to prevent such blatant discrimination in the future.
"We appreciate that the IRS acknowledged and apologized, but the real question is, how do we make sure that this never happens again? All Americans regardless of their philosophical beliefs should be treated equally under the laws of the land," said Jackie Bodnar, spokeswoman for the tax-exempt tea-party group FreedomWorks, according to ABC news.
Disclosure: This reporter was the founder and the president of Z STREET when the litigation against the IRS was filed

Both (c)(3) organizations and (c)(4) organizations are exempt from paying taxes, but only donations made to (c)(3) organizations are tax deductible.  Organizations that are (c)(3)s can engage in only very limited lobbying activity and cannot engage in political activity at all, whereas (c)(4)s can engage in unlimited lobbying and can engage in political activity to the extent it is consistent with the organization's mission and so long as it is not the organization's primary activity.
The pro-Israel and Jewish organizations that have complained about inappropriate IRS activity by the IRS are 501(c)(3)s.
It may be that the next wave of congressional inquiry will focus on what other kinds of organizations have been targeted for special scrutiny by the IRS.
In addition to Friday's House Ways and Means Committee hearing, the IRS can look forward to hearings before at least one more, if not two more, congressional committees.
On Monday, Senate Finance Committee Chairman Max Baucus (D-MONTANA) called for a full investigation into the IRS targeting of conservative groups. Senator John McCain (R-AZ) also announced on Monday that the Senate Permanent Subcommittee on Investigations plans to investigate the new IRS revelations.
President Barack Obama issued a statement on Monday calling the alleged misdoing by the IRS "outrageous, if true."  White House spokesperson Jay Carney said that Obama only found out about the matter last Friday.