Success and preparing for Pesuch

One technique for overcoming feelings of sadness is to stop your thoughts for a few minutes and just feel the bodily reactions you are having. Experience the tension in the muscles of your head, shoulders, arm, and stomach.

"Sadness" is merely the word that describes your inner reaction. Focusing on your body's reaction frequently causes those reactions to subside.

This experiential technique is also effective for alleviating feelings of anger and anxiety, and can be used for relieving tension headaches. 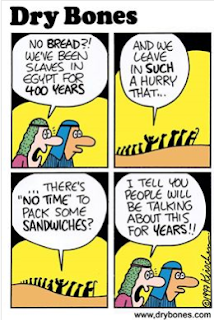 The 5 Most Important Things to Know About Passover

Scholars have long wondered why Jews who number less than one quarter of one percent of the world – as Milton Himmelfarb memorably put it, "The total population of the Jewish people is less than a statistical error in the annual birth rate of the Chinese people" – have had such a profound influence on almost every field of human endeavor.

What accounts for the remarkable fact that in the 20th century, Jews, more than any other minority, have been recipients of the Nobel Prize, with almost one-fifth of all Nobel laureates being Jewish?

Perhaps it all goes back to the very beginning of the birth of our people and the Passover holiday that we will shortly be celebrating.

Passover conveys five major concepts that became our mantras for how to lead successful and productive lives. They are the five most important things to know about Passover, and to incorporate into every day of the rest of the year. Because we've absorbed them into our national psyche for the thousands of years since the Exodus, we've been privileged to fulfill in great measure our prophetically mandated role to become a light unto the nations.

They are our greatest contributions to the world and can be summarized in five words: memory, optimism, faith, family, and responsibility.

The Importance of Memory

The Irish Catholic writer Thomas Cahill was so overwhelmed by how the Jewish people literally transformed the world that he authored what proved to become an international bestseller, The Gifts of the Jews. One of the major gifts he credits to Jewish genius is the invention of the idea of history.

"Remember that you were strangers in the land of Egypt." "Remember that the Lord took you out of the bondage of slavery." Remember is a biblical mandate that had never seemed important to anyone else before the Jewish people came on the scene. It was the Passover story that initiated a commitment to memory.

Henry Ford was famous for his belief that "history is bunk." The Ford motor company is also famous for producing the Edsel. And both were probably equally stupid blunders. History is the only way we can learn from the past. History allows us to grow by standing on the shoulders of giants. Make a mistake once, and you're human. Never learn from what happened before, and you're brainless. That's why it's so important to heed the famous words of George Santayana that "Those who do not learn from the past are condemned to repeat it."

We know how horrible it can be to live without a personal memory of events that preceded. For an individual we have a name for it that fills us with terror: Alzheimer's. It is a disease we fear perhaps even more than death because it leaves us living corpses. Strangely enough, we don't have a similar word for the condition that describes ignorance of our collective past. Knowing what came before is almost as important in an historic sense as it is in a personal one. Only by being aware of our past as a people can our lives become filled with purpose and meaning.

Memory links our past to our future. It turns history into destiny. Learning to treasure it was the first step in our climb up the ladder of greatness.

The Importance of Optimism

To study the Passover story in depth is to recognize that the most difficult task Moses had to perform was not to get the Jews out of Egypt, but to get Egypt out of the Jews. They had become so habituated to their status as slaves, they lost all hope that they could ever improve their lot.

Without hope they would have been lost.

The true miracle of Passover and its relevance for the ages is the message that with God's help, no difficulty is insurmountable. A tyrant like Pharaoh could be overthrown. A nation as powerful as Egypt could be defeated. Slaves could become freemen. The oppressed could break the shackles of their captivity. Anything is possible, if only we dare to dream the impossible dream.

In the story of America's Great Seal, a particularly relevant chapter is the imagery suggested by Benjamin Franklin in August 1776. He chose the dramatic scene described in Exodus, where people confronted a tyrant in order to gain their freedom.

"Pharaoh sitting in an open Chariot, a Crown on his head and a Sword in his hand, passing through the divided Waters of the Red Sea in Pursuit of the Israelites: Rays from a Pillar of Fire in the Cloud, expressive of the Divine Presence and Command, beaming on Moses who stands on the shore and extending his hand over the Sea causes it to overwhelm Pharaoh."

The motto he suggested, words based on the Passover story, inspired George Washington and the founding fathers of the American colonies to rebel against their British oppressors: "Rebellion to Tyrants is Obedience to God."

It was the biblical record of the Exodus that enabled the spirit of optimism to prevail for the followers of Martin Luther King in their quest for equal rights, because they were stirred by the vision of Moses leading his people to the Promised Land. It was the hope engendered by recalling how God redeemed our ancestors that allowed even Jews incarcerated in Auschwitz to furtively celebrate the Festival of Freedom and believe in the possibility of their own liberation.

That optimistic spirit, based on our own miraculous history, is the second great gift we have given to mankind and defines our identity.

The Importance of Faith

A pessimist, it's been said, is someone who has no invisible means of support.

Jewish optimism is rooted in a contrary notion, a firmly held belief that we are blessed with support from above by a caring God. And that faith in a personal God gives us faith in ourselves, in our future and in our ability to help change the world

Thomas Cahill credits the Jews not only for monotheism but for this additional groundbreaking idea of a Divine being with Whom we share a personal relationship. This, he points out, is key to Western civilization's concept of personal accountability, conscience and culpability for ourselves and the rest of the world.

The Passover story conveys that history is not happenstance. It follows a Divine master plan. It has a predestined order. "Order" in Hebrew is "Seder" – and that is why the major ritual of Passover is identified by that name. Coincidence is not a Jewish concept. Coincidence is just God's way of choosing to remain anonymous.

Faith gives us the certainty that whatever our present-day problems, history moves in the direction of the final messianic redemption. That is what has always motivated us to believe in progress and to participate in tikkun olam, efforts to improve the world.

The Importance of Family

Passover taught us yet another major truth: the way to perfect the world is to begin with our own families.

God built his nation by commanding not a collective gathering of hundreds of thousands in a public square but by asking Jews to turn their homes into places of family worship at a Seder devoted primarily to answering the questions of children.

It seems all too obvious. Children are our future. They are the ones who most require our attention. The home is where we first form our identities and discover our values.

More even than the synagogue, it is in our homes that we sow the seeds of the future and ensure our continuity. No wonder then that commentators point out the very first letter of the Torah is a bet, the letter whose meaning is house. All of the Torah follows only after we understand the primacy of family.

The world may mock Jewish parents for their over-protectiveness and their child-centered way of life, but they are the ones chiefly responsible for the extraordinary achievements of their progeny.

At the Seder table, the children are encouraged to be the stars and their questions are treated with respect. And that is the first step to developing Jewish genius.

The Importance of Responsibility to Others

One serious question begs to be asked as we celebrate our Divine deliverance from the slavery of Egypt. We thank God for getting us out, but why did God allow us to become victims of such terrible mistreatment in the first place?

The tragedy of our encounter with injustice was in no small measure meant to prepare us to serve throughout all future generations as spokesman for those with whose pain we can personally identify.

The purpose of our suffering was to turn us into a people committed to righting the wrongs of the world, to become partners with God in making the world worthy of final redemption.

We begin the Seder by inviting the hungry and the homeless to join with us. We conclude the Seder by opening the door for Elijah. It is our acceptance of responsibility to others that is the key to hastening the arrival of Messiah.

From earliest childhood every Jew identifies with these five powerful ideas that are at the heart of Passover and its message. And precisely because memory, optimism, faith, family and responsibility have become such vital characteristics of our people, we have been able to achieve far beyond what anyone might have considered possible.

or http://www.yehudalave.com/
Posted by Rabbi Yehuda Lave at 10:04 AM