Praise The Almighty By Honoring Others

The test of a person's spiritual level is how he treats other people. The purpose of creation is for a person to praise and exalt G-d, to recognize His greatness and continue to grow in this awareness. Similarly, in relation to other people our mission in life is to honor them as much as possible because in doing so we recognize their being created in the image of G-d. The more you show respect to others, the more you are manifesting your awareness of the Almighty's greatness.

Think of someone you already respect. Now imagine that this person is created in God's image. What more could you do to express your respect for this person?

Microscopic particles seek out and repair damage to arteries

Scientists have carried out successful tests of the nano-particles in mice and hope soon to conduct the first patient trials. Each tiny particle is 1,000 times smaller than the tip of a human hair.

Yuri Gagarin was the first Jewish man in space.

He flew into orbit aboard the Soviet spacecraft Vostok I on 12 April 1961.

He never told anyone he was Jewish. (NOT SURPRISING IN THE USSR) 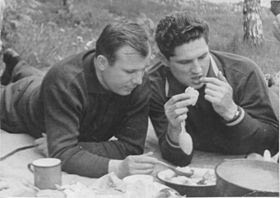 Boris Volynov was another Jew in space.

Judy Resnick , was the first American Jewish astronaut to go into space.

She died tragically when the Challenger broke apart shortly after liftoff for its 10th mission.

She consulted a rabbi about lighting Shabbat candles aboard the Space Shuttle.

Of course, an open flame was not permitted, so she was advised to use electric lights at the proper hour corresponding to the onset of Shabbat at their home base, in Houston .

to ever bring a Torah into space.

He did this during his 1996 mission on the Space Shuttle Columbia.

Another Jewish astronaut, David Wolf, was in orbit during Hanukkah ,

and though he couldn't light his menorah due to the hazards of fire in an oxygen-rich atmosphere, he did take advantage of zero gravity when spinning his dreidels.

"I probably have the record dreidel spin," he later said, "it went for about an

hour and a half until I lost it.

It showed up a few weeks later in an air filter.

and placed them on the door post near his bunk bed.

He was the payload specialist on the Space Shuttle Columbia and,

sadly, he died along with his crew mates when the Columbia disintegrated during re-entry over Southern Texas .

But during his career as an astronaut Judaism was a prominent part of his life in space.

a rabbi about how to observe Shabbat while in orbit.

In addition to a Torah scroll and microfiche copy of the bible, he also carried a picture of Earth as seen from the moon that was drawn by a Jewish boy in a concentration camp

Gary (Garrett) Reisman, who was the first Jewish astronaut to live on the

International Space Station, and who brought a memento from Ilan Ramon's widow

He left right before Passover and asked if he could bring matzah with him, but,

(Reisman is a self-proclaimed member of the Colbert Nation

and had a cameo appearance on the series finale of Battles at Galactica).

and research pilot and a former  NASA   astronaut .

Polansky received the nickname "Roman" as a joke, because he shares a last name

and a veteran of four  space shuttle  missions.He graduated from the

Horowitz was selected as an astronaut candidate by NASA in 1992,

He commanded mission  STS-105 , a visit to the  International Space Station

for equipment and crew transfer.

and a former  NASA   astronaut .

and has served as  NASA Chief Scientist .

is an  American   pathologist  and researcher who flew on

as a  Payload Specialist .

is an American   astronaut  and  professor  at  Carnegie Mellon University .

From 1982 through 1985 he was a flight controller responsible for

In 1985 he was selected as an astronaut candidate, and qualified to

become an astronaut after a year of training.

He has flown on four space missions and has logged over 847 hours in space.

and a veteran of five  space shuttle  missions.

In 1984, Ivins was selected as an astronaut candidate.

is an A merican   physician  and a  NASA   astronaut .

Baker serves as Chief of the Education/Medical Branch of the NASA Astronaut Office. Selected by NASA in May 1984, Baker became an astronaut in June 1985.

Since then, she has had a variety of jobs at NASA in support of the  Space Shuttle  program and  Space Station  development. She was a mission specialist on  STS-34 in 1989,  STS-50

She is Chief of the Astronaut Office Education/Medical Branch.

or http://www.yehudalave.com/
Posted by Rabbi Yehuda Lave at 12:34 PM