Others are naturally intimidated. They would rather do without, than say things that everyone would agree they have a right to say. For them, asking for what they need is an act of courage.

On my trip to the city of David, below, I found very courageous people willing to stand up for their rights. The people that come to live in Israel are trying to connect to G-d and express their courage in many ways. 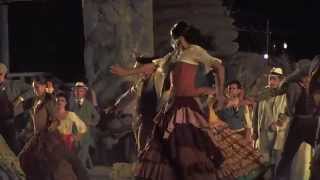 (Opera in the Market) 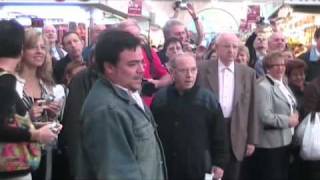 THE Large Hadron Collider has confirmed the existence of a new particle which helps make up everything in universe. 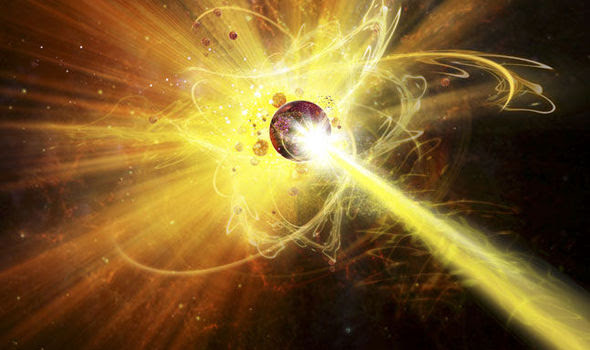 Artist impression of a particle colliding in the machine

The Large Hadron Collider (LHC) is a huge £7billion "atom smashing" machine based at the European Organization for Nuclear Research (CERN) in Switzerland is hidden in more than 16 miles of underground tunnels beneath the Swiss-French border.

Today scientists announced the discovery of the existence of the new tiny particle - the pentaquark, which was previously only a theory.

Scientists from CERN, which operates the collider, believe the existence of the particle could shed new light on how the matter that makes up everything, including humans is made and constituted.

Back then, the pentaquark, was a purely theoretical particle composed of four quarks and an antiquark, but CERN researchers claim their findings it actually exists are irrefutable.

LHC spokesperson Guy Wilkinson said: "The pentaquark is not just any new particle.

"It represents a way to aggregate quarks, namely the fundamental constituents of ordinary protons and neutrons, in a pattern that has never been observed before in more than 50 years of experimental searches.

"Studying its properties may allow us to understand better how ordinary matter, the protons and neutrons from which we're all made, is constituted."

Researchers will now investigate how quarks bind together within pentaquarks. 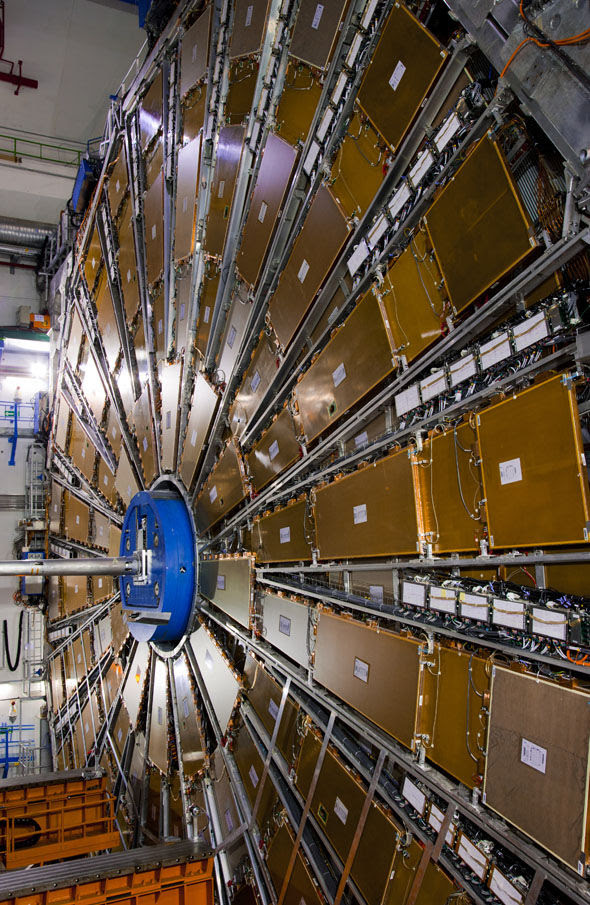 Part of the enormous collider

The Mishnah tells us that: "No days were as festive for Israel as the 15th of Av and Yom Kippur." (Tractate Ta'anit) What is Tu B'Av, the 15th of the Hebrew month of Av? In which way is it equivalent to Yom Kippur?

Our Sages explain: Yom Kippur symbolizes God's forgiving Israel for the sin of the Golden Calf in the desert, for it was on that day that He finally accepted Moses' plea for forgiveness of the nation, and on that same day Moses came down from the mountain with the new set of tablets.

Just as Yom Kippur symbolizes the atonement for the sin of the Golden Calf, Tu B'Av signifies the atonement for the sin of the Spies, where ten came bearing such negative reports which reduced the entire nation to panic. As a result of that sin, it was decreed by God that the nation would remain in the desert for 40 years, and that no person 20 or older would be allowed to enter Israel. On each Tisha B'Av of those 40 years, those who had reached the age of 60 that year died – 15,000 each Tisha B'Av.

Event #1 - As noted above, the plague that had accompanied the Jews in the desert for 40 years ended. That last year, the last 15,000 people got ready to die. God, in His mercy, decided not to have that last group die, considering all the troubles they had gone through. Now, when the ninth of Av approached, all the members of the group got ready to die, but nothing happened. They then decided that they might have been wrong about the date, so they waited another day, and another...

Finally on the 15th of Av, when the full moon appeared, they realized definitely that the ninth of Av had come and gone, and that they were still alive. Then it was clear to them that God's decree was over, and that He had finally forgiven the people for the sin of the Spies.

This is what was meant by our Sages when they said: "No days were as festive for Israel as the 15th of Av and Yom Kippur," for there is no greater joy than having one's sins forgiven – on Yom Kippur for the sin of the Golden Calf and on Tu B'Av for the sin of the spies. In the Book of Judges, Tu B'Av is referred to as a holiday (Judges 21:19).

In addition to this noteworthy event, five other events occurred on Tu B'Av:

Events #2 and 3 - Following the case of the daughters of Zelophehad (see Numbers, chapter 36), daughters who inherited from their father when there were no sons were forbidden to marry someone from a different tribe, so that land would not pass from one tribe to another. Generations later, after the story of the "Concubine of Giv'ah" (see Judges, chapters 19-21), the Children of Israel swore not to allow their daughters to marry anyone from the tribe of Benjamin. This posed a threat of annihilation to the tribe of Benjamin.

Each of these prohibitions were lifted on Tu B'Av. The people realized that if they kept to their prohibition, one of the 12 tribes might totally disappear. As to the oath that had been sworn, they pointed out that it only affected the generation that had taken the oath, and not subsequent generations. The same was applied to the prohibition of heiresses marrying outside their own tribe: this rule was applied only to the generation that had conquered and divided up the land under Joshua, but not future generations. This was the first expression of the merging of all the tribes, and was a cause for rejoicing. In the Book of Judges it is referred to as "a festival to the Lord."

Over the generations, this day was described in Tractate Ta'anit as a day devoted to betrothals, so that new Jewish families would emerge.

Event #4 - After Jeroboam split off the kingdom of Israel with its ten tribes from the kingdom of Judea, he posted guards along all the roads leading to Jerusalem, to prevent his people from going up to the Holy City for the pilgrimage festivals, for he feared that such pilgrimages might undermine his authority. As a "substitute," he set up places of worship which were purely idolatrous, in Dan and Beth-el. Thus the division between the two kingdoms became a fait accompli and lasted for generations.

The last king of the kingdom of Israel, Hosea ben Elah, wished to heal the breach, and removed all the guards from the roads leading to Jerusalem, thus allowing his people to make the pilgrimage again. This act took place on Tu B'Av.

Event #5 - At the beginning of the Second Temple period, the Land of Israel lay almost totally waste, and the wood needed to burn the sacrifices and for the eternal flame that had to burn on the altar was almost impossible to obtain. Each year a number of brave people volunteered to bring the wood needed from afar – a trip which was dangerous in the extreme.

Now, not just every wood could be brought. Wood which was wormy was not permitted. And dampness and cold are ideal conditions for the breeding of worms in wood. As a result, all the wood that would be needed until the following summer had to be collected before the cold set in. The last day that wood was brought in for storage over the winter months was Tu B'Av, and it was a festive occasion each year when the quota needed was filled by that day.

Event #6 - Long after the event, the Romans finally permitted the bodies of those who had been killed in the defense of Betar (in the Bar Kochba revolt) to be buried. This was a double miracle, in that, first, the Romans finally gave permission for the burial, and, second, in spite of the long period of time that had elapsed, the bodies had not decomposed. The permission was granted on Tu B'Av.

In gratitude for this double miracle, the fourth and last blessing of the Grace After Meals was added, which thanks God as "He Who is good and does good." "He is good" – in that the bodies had not decomposed, "and does good" – in that permission was given for the burial.

To this day, we celebrate Tu B'Av as a minor festival. We do not say Tahanun on that day, nor are eulogies rendered. By the same token, if a couple are getting married on that day (and, as we will see below, it is the custom for the bride and groom to fast on their wedding day), neither fasts.

Beginning with Tu B'Av, we start preparing ourselves spiritually for the month of Elul, the prologue to the coming Days of Awe. The days begin to get shorter, the nights get longer. The weather, too, helps us to take spiritual stock: the hectic days of the harvest are over for the farmer, and the pace has slowed down considerably. Even on a physical level, the heat of the summer makes it hard to sit down and think things out, and now that the days and nights are cooler, it is easier to examine one's actions.

In earlier times, it was the custom already from Tu B'Av to use as one's greeting "May your inscription and seal be for good" (ketiva vahatima tova), the same blessing that we today use on Rosh Hashana. Those who work out the gematria values of different expressions found that phrase adds up to 928 – and so does the words for "15th of Av."

or http://www.yehudalave.com/
Posted by Rabbi Yehuda Lave at 10:00 AM