Being impulsive causes many mistakes and errors. Doing things impulsively will cause loss, damage, and harm. Saying things impulsively will cause you to say things better left unsaid. Thinking before you speak will enable you to think of the best way to say something. Thinking before you take action will enable you to consider whether you should do something, and how to do it if you should.

The two words that will remind you to stop and think are, "Just pause." As you pause, think to yourself, "What is the wisest thing for me to say and do now?"

Practice building the association in your mind between, "Just pause," and, "What is the wisest thing for me to say and do now?" How do you build the association? It's quite easy. You just repeat these two sentences together a number of times. Repeat them with an upbeat tone of voice, or sing them with your own tune. Enjoy the process. This way you will access positive feelings when you recall this association in "real life."

The secret life of G-d by Rabbi  David Arron

Moishe Mandelbaum was fed up with humanity and decided to spend the rest of his life in a monastery. The head of the monastery warned him that he would have to take a vow of silence and live the rest of his life as a scribe, to which Moishe replied, "No problem. Anyway, I'm sick of talking."

Ten years went by, and the head of the monastery called for Moishe. He told him that he was a model resident and perfect scribe, and that they were very happy to have him. As per their tradition, he was allowed to say two words. Asked if he had anything to say, Moishe nodded and said, "Food cold."

Moishe was sent on his way. Ten years later, Moishe was brought before the head of the monastery again and once again told how pleased they were with his performance, and that he was again allowed two more words if he so chose. Moishe said, "Bed hard," and was sent back to work.

Another ten years went by, and again Moishe was called in for an audience, and he was allowed another two words. Moishe nodded and said, "I quit."

To this, the head of the monastery replied in a disgusted tone, "Doesn't surprise me. Moishe Mandelbaum, ever since you got here, you've done nothing but complain."

Tefillin After 72 Years
By Gutman Locks 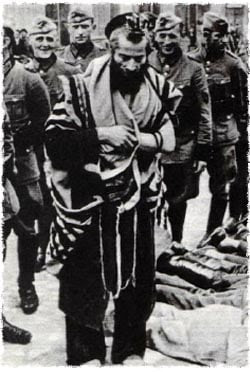 Last week at the Western Wall, I asked an elderly man to put on tefillin. He strongly refused.

I asked him, "When was the last time you put on tefillin?"

He smiled and proudly said, "72 years ago!" He held out his arm to show me the fading tattooed numbers. "1938," he said. "It was the day of Kristallnacht. Do you know what Kristallnacht is?"

"Two hundred and sixty-seven synagogues were burned down in one night. They burned down our synagogue, too. My tefillin were burnt up, and I have never put them on again," he said.

"I have a friend who was in the camps, too," I quickly said, "and he not only puts on tefillin today, but he even put them onto others inside the camp! Do you want to hear how he got tefillin into the camp?"

Laibel stuffed his tefillin into one boot, and his prayerbook in the other "His name is Laibel. Whenever he comes to Israel, he prays with our minyan at sunrise. He also has numbers tattooed on his arm. When we first met, he asked me, 'What do you do around here?' and I responded, 'I put tefillin on people here at the Western Wall.'

"I stared at him. There was nothing I could say. I was dumbfounded. I asked him, 'How did you get the tefillin in there?'

"He began his story. The Nazis had come to the ghetto and grabbed 137 young boys. He told me that only five of them survived. Only five.

"He was thirteen and a half years old. He was wearing the high boots that his father had bought him, and when he saw them coming, he stuffed his tefillin into one boot and his prayerbook in the other.

"They pushed the boys into a cattle car and drove them to the death camp, not far from the ghetto. When the train stopped, they slid open the side of the cattle car and immediately began pushing them toward the open door of the gas chamber. The boys were frightened and cried out. They asked Laibel, 'What should we do?' He told them, 'We're going to stand in rows five across, and we're going to march right into that gas chamber singing a song of faith, the "Ani Maamin."' And they did just that. They stood in rows five across, and started singing and marching right into the chamber.

"The guards became so confused that they did not know what to do. They screamed, 'You can't do that! No one has ever done such a thing before. Stop it! Stop it at once! Here! Go over there to the showers instead!'

"They pushed them over to the showers, and forced them to undress and throw their clothing into a pile in the middle of the floor. They made them empty their shoes, and the tefillin and prayerbook fell out onto the pile.

"After the shower, when they were dressed in camp clothes and were being pushed out, past the pile of their clothes, Laibel saw his tefillin and prayerbook lying there. He wanted so badly to run and pick them up, but terrifying guards were watching. He said to the boys, 'I did something for you, so now you do something for me.'

"'Whatever you want,' they said. 'You saved our lives.'

A guard came by and screamed, "Who said you could open that window?""He said, 'When I give the signal, start a fight and scream out loud. Okay . . . now!' The boys started to fight and scream. The guards ran over and tried to pull them apart, but they wouldn't stop fighting. In the confusion, he ran over and grabbed his tefillin and prayerbook, and hid them under his arms.

"Later, he was in the barracks, and wanted to put on the tefillin. He was able to put the arm-tefillin on without anyone seeing, by pulling his sleeve over it, but how could he put on the head-tefillin? There were guards all over. He opened the window and stuck his head outside so he could put on the head-tefillin. A guard came by and screamed, 'Who said you could open that window?' He told him that he was sick and throwing up, and if he made him close the window he would throw up inside, too. The guard left him. And he looked me in the eye and said, 'And I put tefillin on other men, too.' I started to cry, and I kissed him on his yarmulke.

"The day after Laibel told me his story, there was a soldier at the Western Wall who wouldn't put on tefillin. No matter what I said, he simply refused. Then I told him Laibel's story, and he quickly said, 'Okay, I'll do it.'

"And you can do it, too," I said to the elderly gentleman who hadn't donned tefillin in 72 years, as I gently slid the tefillin I was holding onto his arm. He said the blessing and started to cry. We said the Shema, and he prayed for his family. He began to smile even while the tears were streaming down his face. A crowd gathered around and congratulated him on overcoming all those years of rejection.

You do not always succeed, but you always have to try.

By Gutman Locks
Gutman Locks—also affectionately known as "Guru Gil"—has been a fixture in the Old City of Jerusalem for two decades. He is the author of several books and musical tapes. His website is www.thereisone.com.

or http://www.yehudalave.com/
Posted by Rabbi Yehuda Lave at 1:54 PM