Is G-d Dead? Is Marriage Dead? and July 4th brings the anniversary of Entebbe

For Those Thankless Tasks

When people try to humiliate and insult you for doing a good deed, be happy! Why? Because the less honor you receive, the more you manifest love for the good deed itself.

From The New York Times:

Nicholas Winton Is Dead at 106; Saved Children From the Holocaust

A London stockbroker in 1938, he rescued 669 youngsters from Czechoslovakia but then said nothing about his deeds for 50 years.

Having answered her question, I posed one of my own.

I asked her to imagine two couples, one a same-sex couple and the other a married man and woman, and the two are equally loving, psychologically and emotionally healthy, and responsible. If you had a newborn baby that had been placed for adoption, I asked her, which couple would you give the baby to?

At first, Harris avoided responding to the question. Finally, when pressed, she said that she would need more information about the couples.

The reason I asked the question was that I assume that most proponents of same-sex marriage don't really believe that starting out life without a mother or without a father ­ and never having the opportunity to have a mother or father later in life ­ is just as good for a child as having a mother and a father.

That's why Harris didn't want to answer the question. As a proponent of same-sex marriage, she could not possibly say on national television that, all things being equal, it is better for a child to have both a mother and father. On the other hand, she would sound foolish to most Americans ­ even many liberals ­ to say that not having a mother or not having a father makes no difference.

Yet, that is what defenders of same-sex marriage are forced to say. Because if they acknowledge the importance of having a mother and a father, they are implicitly acknowledging that man-woman marriage is the ideal ­ at least with regard to children.

The reason for the intensity of the passion on behalf of same-sex marriage has little to do with legality and rights. Rights available to married couples could have been made available to same-sex couples without having to redefine marriage.

Rather, the reason for the intensity on behalf of same-sex marriage is that any same-sex union other than marriage would imply that the male-female union is the ideal. And in the Age of Equality in which we live ­ all cultures are equal, all religions are equal, all nations are equal ­ this assertion is not expressible.

Yet, as much as people seek to deny it, male-female marriage has been the ideal in every civilization that has a recorded history. It has certainly been the Jewish ideal. Adam is alone and God makes for him a woman. A man shall leave his father and his mother and cleave unto his woman and they shall be as one flesh. And men should restrict their sexual activity to their wives (this was unique to the Torah ­ every other ancient culture celebrated male-male sex; sex with wives was for making babies).

Does the male-female ideal mean that the homosexual man or woman is inferior? Of course not. One example should make this clear: No one, not even most liberal Jews, would argue that having a single (loving and competent) parent is no different from having two (loving and competent) parents. Every intellectually honest person knows that a two-parent home is the ideal. Yet, no one would argue that a single parent is an inferior human being. The idea is preposterous.

But the left has equated such commonsensical assertions with "hatred," with "bigotry" and with "racism."

The majority of gays will never marry. But the cultural left knows that anything other than marriage ­ no matter how many rights are allowed ­ implies that the male-female union is the ideal. And that is not allowed. To even hint at it is to be a "hater."

That is what the battle over same-sex marriage is largely about.

And that is why it is particularly sad to see how many non-Orthodox rabbis have decided that Judaism has been wrong for 3,000 years in insisting that male-female marriage is the human ideal. It gives one little faith in the non-Orthodox movements' ability to withstand societal pressure and stand up for Judaism. And this is written by a non-Orthodox Jew.

We have entered a Brave New World unimaginable even to Aldous Huxley, the author of the book of that famous title. He could never have imagined, for example, the latest poll showing that most American young people, 16 to 34, believe that gender identity is "fluid."

Pity this next generation. They are guinea pigs in the most radical social transformation in history.

Dennis Prager is a nationally syndicated radio talk-show host (AM 870 in Los Angeles) and founder of PragerUniversity.com. His latest book is the New York Times best-seller "Still the Best Hope: Why the World Needs American Values to Triumph" (HarperCollins, 2012).

On June 27th, 1976, Air France Flight 139 was hijacked by Germans from the Baader-Meinhof German militant group and Palestinians from the Popular Front for the Liberation of Palestine. With no room for negotiation, nearly zero information on the terrorists' plan, and a deadline of just 48 hours until hostages would start being murdered, the Israeli government and security forces put together one of the most daring, brazen rescue missions in Israeli military history.

Israel Forever invites YOU to commemorate this historic operation and mark this dramatic victory over international terrorism by enjoying the articles, videos and blogs to follow. 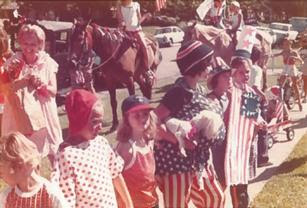 I was sick thinking of how they had separated the Jewish and Israeli passengers; releasing the Christian ones. That a German terrorist was involved in this separation brought home again the knowledge that the Holocaust will never really leave us. 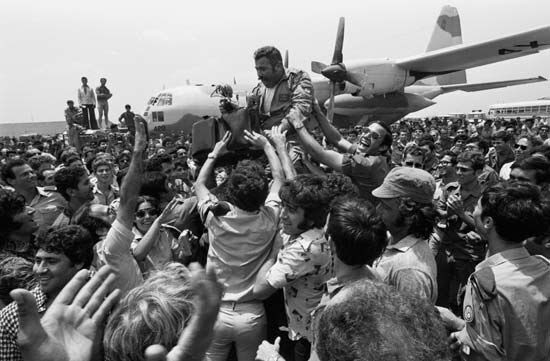 Rescue at Entebbe: An Anniversary of Freedom

The "non celebration" of Shavuot by so many Jews is paradoxical given the important significance of the festival, this incredible double celebration of land and life as we culminate our Exodus from Egypt. 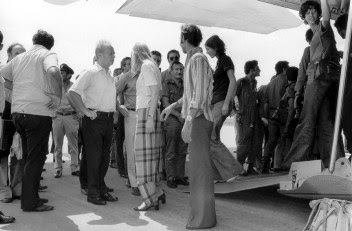 Video: Meet the Heroes of Entebbe

An intimate look into the operation from the point of view of former IAF soldiers and Israeli hostages.

"...there were Magen David pendants thrown on the floor because the people figured out what was going on..."

Israel still faces the threat of terror today, a threat that is increasingly complex to respond to within the framework of international law.

Toward this end, we are proud to be a co-sponsor of The Institute for Law and Policy of the Hebrew University Faculty of Law bringing together law students from around the globe.

Hamas on the Temple Mount 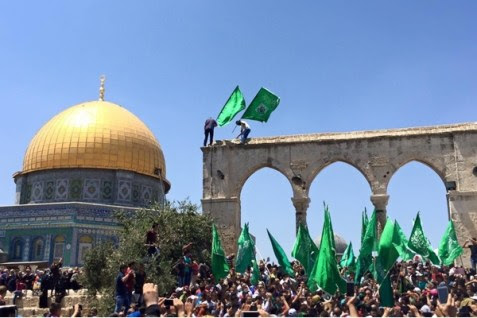 Nothing quite like Hamas terrorist supporters on the Temple Mount openly waving their flags during Friday prayers.. 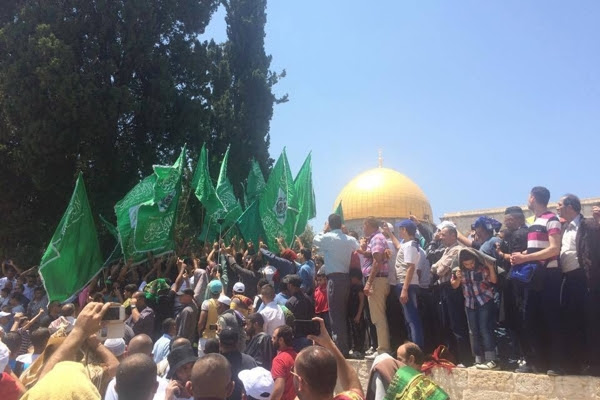 Plus a bonus video for you too…

Go to the link if you want to see the four minute video of the Arabs waiving Hamas flags on the temple mount.

or http://www.yehudalave.com/
Posted by Rabbi Yehuda Lave at 3:38 PM