Before asking someone for a favor, realize that he might not grant you the favor. Although it is appropriate to think of the best way to influence him to help you out, accept him if he refuses. Now there is nothing wrong with doing a "hard sell" to try to convince the person.. Many times the resistance is becasue the person is unsure what his responsibilities or benefits are to them, so they just say no. Since you are entitled to influence a person responsibly, you don't have to accept the no. As long as the person continues to talk and have a dialogue with you, there is a chance you could convince them. And if afterwards when they have sour grapes and say you convinced them to doing something they did not want to do, take it with a grain of salt. They really wanted to be convinced at the time. If the situation doesn't work out, that is part of life, and we should judge favorably, you are entitled to ask for what you want.

And even before you ask for the favor, think how you can judge him positively if he does not help you.

These are possibly some of the most unique photos you will ever see .....

We've been there before!
Back n 1994 President Bill Clinton explained how his agreement with North Korea would prevent them from developing nukes.

At the time the New York Times reported:

WASHINGTON, Oct. 21, 1994
— Following are excerpts from President Clinton's White House news conference today:
"Before I take your questions, I'd like to say just a word about the framework with North Korea that Ambassador Gallucci signed this morning. This is a good deal for the United States.

North Korea will freeze and then dismantle its nuclear program. South Korea and our other allies will be better protected. The entire world will be safer as we slow the spread of nuclear weapons.

South Korea, with support from Japan and other nations, will bear most of the cost of providing North Korea with fuel to make up for the nuclear energy it is losing, and they will pay for an alternative power system for North Korea that will allow them to produce electricity while making it much harder for them to produce nuclear weapons.

The United States and international inspectors will carefully monitor North Korea to make sure it keeps its commitments. Only as it does so will North Korea fully join the community of nations." -more

The US refused to condition ObamaDeal on Iran's stopping its threat to destroy Israel. State Dept.: "That's a question for Iran's leaders."
By: Tzvi Ben-Gedalyahu
Published: July 17th, 201 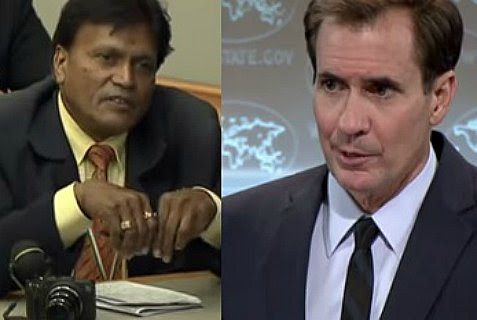 The U.S. State Dept. fumbled a golden opportunity Thursday to ask, beg or insist that Iran stop threatening to wipe Israel off the map.


In the past, Iranian president said that Israel will be wiped off the world map. Are they going to turn back this and – this as far as this renouncing Israeli – Israel's existence?

Kirby asked, for clarification, "Who going to turn back what?," and Goyal, as he is called in Washington, asked again, until he was cut off, "If they are going to denounce terrorism and also what they said in the past that Israel will be wipe –"

Kirby answered by not answering:


Will Iran? Well, I think you'd have to – I mean, that's a question for Iran's leaders.

It would seem that U.S. Secretary of State John Kerry never asked Iran during the marathon talks with Iran if the Islamic Republic might at least tone down, just for a bit of good public relations, its constant threat to annihilate Israel, as was reiterated on the eve of the agreement.

But Kirby reassured everyone that the United States is "not going to turn a blind eye to Iran's other destabilizing activities in the region, to include the state sponsorship of terrorists and terrorist networks. Nothing's going to change about our commitment to continuing to press against those kinds of activities through a broad range of methods, whether it's our unilateral sanctions, UN sanctions which will stay in effect, or U.S. military presence in the region."

He is right. The United States is not turning a blind eye to Iranian terror. It is looking at it straight in the eye and figuring it will go away by freeing up to $150 billion for Iran.

They are currently supporting Hezbollah, and there is a ceiling — a pace at which they could support Hezbollah even more, particularly in the chaos that's taking place in Syria.

Out of $150 billion, President Obama says Iran will have "some" additional funds. Then he assumes there is a "ceiling" of how much Iran can support Hezbollah.

But President Obama is not worried that Iran will "only" pocket "some" of $150 billion to wipe out Israel, which makes its procurement of a nuclear weapon less urgent.

The video below. at 0:42 seconds, shows Goyal and Kirby's exchange:

or http://www.yehudalave.com/
Posted by Rabbi Yehuda Lave at 12:28 PM