Identify Yourself as a Soul with a Body

A person who identifies himself with his soul will take good care of his body to keep it safe and healthy, but he will keep his main focus on nourishing his soul. A person who sees himself as being a soul, someone who has a body just for the duration of his stay on this planet, will tend to view other people as essentially being souls also. This will raise his view of others. He will automatically treat others with greater respect.

The more you see yourself as a soul with a body, the higher your self-image will be. Who am I? "I am a soul who is living in this world within my body."

When you don't know what to do, ask yourself, "What course of action would my soul want me to choose?"

8 Things You Should Never Say to Your Spouse

Refraining from saying certain things is just as important as what we say.

We didn't know the newlywed couple very well but friends of ours had asked us to invite them over. It took less than a minute of dinner table conversation to see that they weren't getting along very well.

When I asked them how they met, they immediately launched into an argument about it. That's not how it happened. Yes, it is. No it's not. You're wrong. I asked you to stop saying that to me all the time.

At first my husband and I just sat there in a state of mild shock and growing discomfort. Then I tried interrupting them: "Um, guys, it's okay. It doesn't really matter how you met. Do you want some rugelach maybe?"

They turned to look at me in surprise and then the husband said, as the wife simultaneously reached out for a chocolate rugelach: "No thanks, we're watching our weight." He then glared at his new wife as she ate.

"I think I'll go get some fruit for everyone," I said brightly.

"I'll help you," my husband said quickly, and we escaped to the kitchen to try to figure out what to do.

Sometimes a couple descends into this cycle of hostility and bickering because they don't know how to communicate with each other. Refraining from saying certain things is just as important as what we say. Here are the top eight things we should never say to our spouses. 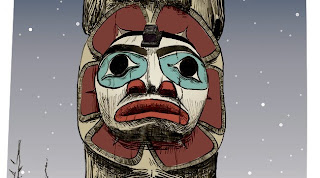 By Geoff Kirsch
"The problem is whale, seal, shellfish (obviously), even caribou — none of it's kosher," said tribal judge David Avraham Voluck, a man whose job entails puddle-jumping all over the state, sometimes to within 500 miles of Siberia. "But in Alaska, Baruch HaShem, there's always salmon and halibut."
This leads to the obvious question: How does a nice Jewish boy from the suburbs of Philadelphia wind up in such far-flung northern locales that during the summer he can't make Havdalah until the sun finally "sets" at 3 a.m.?
"That's a big question, with many threads," Voluck, 44, recently told me.
"So, there are two 'weird' things about David Voluck," he continued, laughing impishly, as is his habit. "Well, probably more than two, but two really weird things. First, I'm an observant Jew, which is not commonplace in Alaska. I'm also a tribal judge, the state's only non-Native tribal judge — at least that I know of." 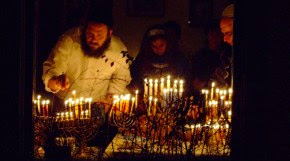 or http://www.yehudalave.com/
Posted by Rabbi Yehuda Lave at 12:32 PM