Gossip is a terribly destructive activity. The problem is, we usually don't mind as long as it's not being spoken about us!

If you ever hear someone needlessly relating negative information about another person, feel compassion for the person spoken against and ask the speaker to stop.

I'm in the pictures below at the women in Green web site, and here are my own pictures from you-tube

women in Green Oz veGaon
Your video will be published at http://youtu.be/uWuLLMtmYgw

About 200 people crowded into the event tent at the Oz veGaon Forest Preserve, which was established by Women in Green above Gush Etzion Junction half a year ago, on the day that it became known that the three abducted youths had been murdered.

Avital told her story – the story of the struggle to free her husband Natan from the Egypt of modern times-  frozen Russia.

Avital's story touched the audience. There was not a dry eye in the house. The story was full of optimism and faith

in the ways of the Almighty to redeem and it filled the entire audience with energy and strength to continue the journey.

Below is a link to photographs by the photographer Elad Pesach. Please give credit if you use the photos.

The entire talk will be uploaded to Women in Green's YouTube channel, G-d willing, in the beginning of next week.

For US tax deductible donations: http://www.womeningreen.org/help

Thank you for being partners!

A judge in Germany convicted three German Palestinians for attacking a synagogue, but said they were bringing "attention to the Gaza confict," not anti-Semitic.
By: Hana Levi Julian
Published: February 7th, 2015 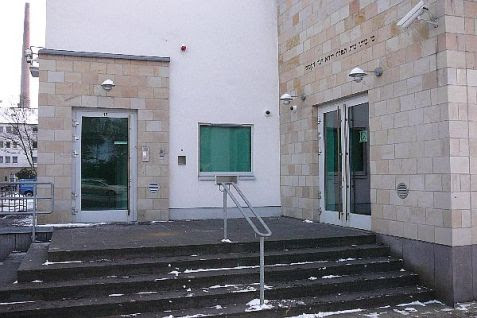 Three German Palestinians convicted of arson after hurling firebombs at a synagogue in Germany were motivated by trying to bring "attention to the Gaza conflict," according to the judge who convicted them on Thursday, Jerusalem Post journalist Benjamin Weinthal reported.

The judge in the case did not believe the men were guilty of anti-Semitism, according to outraged Green Party deputy Volker Beck, who told media he wrote to the prosecutor in the case to file a legal objection, reported.

Several days prior to the firebombing, "Free Palestine" had been sprayed in paint on to the wall of the synagogue as well.

The rebuilt synagogue in Wuppertal, North Rhine-Westphalia was undamaged in the July 29, 2014 attack, which sparked a solidarity rally outside the building that same night. Dieter Graumann, then-president of the German Central Council of Jews, condemned the attack as did Germany's Central Council of Muslims.

The two older attackers, ages 29 and 24, were given suspended sentences of 15 months in prison – which means they served no time – and together with their 18-year-old accomplice were ordered to perform 200 hours of community service.

"This is a mistaken decision as far as the motives of the perpetrators are concerned," Beck told international media in a statement. "Therefore, I have written the prosecutor and called for the filing of a legal objection." Burning a synagogue in Germany because of a conflict in the Middle East can be attributed only to anti-Semitism, Beck contended.

"What do Jews in Germany have to do with the Middle East conflict? Every bit as much as Christians, non-religious people or Muslims in Germany, namely, absolutely nothing. The ignorance of the judiciary toward anti-Semitism is for many Jews in Germany especially alarming, he said."

The original Wuppertal synagogue was burned down by Germans during the pogrom of Kristallnacht in 1938, but the echoes of the past seem to be growing louder. The German state has seen an upswing in anti-Semitism, as has the country in general.

Anti-Semitism in Germany is on the rise, according to the Central Council of Jews in Germany, as it is in other countries across Europe.

Graumann offered a sobering comment on the situation just before leaving his post in an interview with BILD newspaper in November 2014: "For a while I noticed that anti-Semitism is becoming increasingly public and is no longer hidden. We often receive anti-Semitic messages sent according to name and address. Some people are no longer ashamed and no longer hide their hostility to Jews.

"We have seen … during the war in Gaza, demonstrations of pure primitive hatred against the Jews that broke out again. It is very hard for me to talk about it but, when there are calls in the streets of Germany, 'Jews to the gas,' it hurts us greatly," he added.

Two weeks prior to the publication of Graumann's interview, the neo-Nazi 'Die Rechte' party (The Right) demanded to know where all the Jews live in the city of Dortmund.

'Die Rechte' wrote to Mayor Ullrich Sierau through one of its city council members, Dennis Giemsch, seeking to know how many Jews live in the city and in which districts, and their addresses, according to a post on the Coordination Forum for Countering Anti-Semitism (CFCA).

Giemsch, a full-time computer student, wrote that the information was 'relevant for our political work.'

The demand was refused and the letter was passed to the Interior Ministry of the State of North Rhine-Westphalia – the same state in which the torched synagogue is located – and which is "looking at ways to legally ban the party."

The political party is the smallest of the far-right groups in Germany, but its numbers are growing, particularly among the young, according to the CFCA.

About the Author: Hana Levi Julian is a Middle East news analyst with a degree in Mass Communication and Journalism from Southern Connecticut State University.

or http://www.yehudalave.com/
Posted by Rabbi Yehuda Lave at 4:18 PM