ATTITUDE is everything and why is Jaffa being attacked?

When one observes Shabbos with a total sense of serenity, every time one thinks of Shabbos, one will feel more peaceful.

Some Shabbos observers focus on all the work they need to do for Shabbos and feel tense about this. Mentally go beyond the work you need to do. Remember that on Shabbos you will celebrate all that you have, all that exists on our planet, and all that exists in the entire cosmos. This is mind-boggling. Let the joy and serenity of Shabbos permeate your being during your entire stay in this world.

The French restaurant, Le Petit Chef, came up with an original way to entertain guests while waiting for their orders.  By using a projector on the ceiling and animation on the table, there appears to be a small chef who prepares a meal on your plate.  It makes a good laugh. A great way to cheer up.

A famous writer was in his study. He picked up his pen and began writing:

**  Last year, my gall bladder was removed.  I was stuck in bed due to this surgery for a long time.
**  The same year I reached the age of 60 and had to give up my favorite job. I had spent 30 years of my life with this publishing company.
**  The same year I experienced the death of my father.

**  In the same year my son failed in his medical exam because he had a car accident. He had to stay in the hospital with a cast on his leg for several days.
**  And the destruction of the car was a second loss.
At the end he wrote:  Alas! It was such bad year!!

When the writer's wife entered the room, she found her husband looking sad and lost in his thoughts.  From behind his back she read what was written on his paper.  She left the room silently and came back shortly with another paper on which she had written her summery of the year and placed it beside her husband's writing.

When the writer saw her paper, he read:
**  Last year I finally got rid of my gall bladder which had given me many years of pain.

**  I turned 60 with sound health and retired from my job. Now I can utilize my time to write better and with more focus and peace.
**  The same year my father, at the age of 95 without depending on anyone and without any critical conditions, met his Creator.
**  The same year, God blessed my son with life.  My car was destroyed, but my son was alive and without permanent disability.

At the end she wrote:  This year was an immense blessing and it passed well!!

Attitude is what you need to handle this story from 60 minutes on the Hidden Holocaust:

http://www.cbsnews.com/videos/lara-logan/
And the follow up story on 60 minutes overtime

If this is not treason, nothing is: 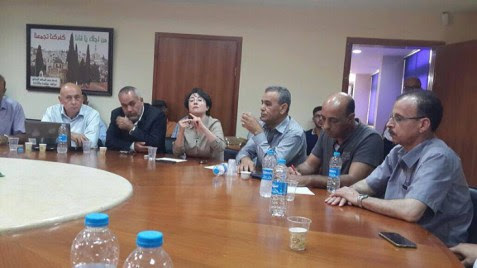 (JNi.media) MK Haneen Zoabi, serving in Israel's Knesset since 2009, on Thursday told Gulf News: "We do not receive orders from Netanyahu and Israel." This was in response to Prime Minister Benjamin Netanyahu's barring of cabinet ministers and lawmakers from visiting the Temple Mount, fearing that high-profile visitors, Jewish or Arab, would further inflame tensions in the already high strung Jerusalem.

Zoabi, who's been presenting herself as a Palestinian member of Israel's parliament—although she is a registered Israeli citizen, also told Gulf News Netanyahu's order was "a mere hysteric reaction," and declared: "We challenge this ban order. Let them try us. We will regularly and increasingly visit Al Haram Al Sharif (the Arab name for the Temple Mount) to protect it. We do not receive orders from Netanyahu and Israel. Our relationship with occupied East Jerusalem and Al Haram Al Sharif does not pass through Israel and Netanyahu does not have anything to do with it."

Since MK Zoabi has pledged her allegiance to the State of Israel, and has submitted herself to faithfully to discharge her mandate in the Knesset, which includes following the directives of the prime minister, her recent statement to the contrary is questionable at best. She also may not by law officially refer to herself as Palestinian, since "Palestinian" suggests having a dual citizenship, which would disqualify her from serving as an MK.

On Friday morning, MK Zoabi told News 10 TV that she and fellow Arab lawmakers are not seeking calm. "I do not want peace in the shadow of occupation, I want to fight," she declared, explaining that when it comes to Israelis, "what does not work for the brain, may work through force."

"The Palestinians in Israel want to prevent [Jewish] rioters from entering Al-Aqsa," Zoabi insisted, adding a cultural observation: "We are for freedom of worship, but those for whom entry to the Al-Aqsa Mosque is natural are only Muslims."

Haneen Zoabi used to be a poster child for Israeli-Arab co-existence, born in Nazareth to a political Muslim family (two of her relatives were MKs, one a deputy minister). Zoabi earned a BA in philosophy and psychology at Haifa University, and an MA in communications from the Hebrew University in Jerusalem. She was the first Israeli Arab citizen to graduate in media studies, and helped establish media classes in Arab schools. She started her career as a math teacher, graduating quickly to school inspector for the Israeli Ministry of Education.

Why is Jaffa being attacked?

The reason the current attacks and riots have shocked and surprised some is that Israeli leaders and the Israeli public have unfortunately not been listening to what our Palestinian Authority peace partners are telling their people about our cities.

The host on a popular weekly children's program on official PA TV recently told children the following about Jaffa's past and its future: Puppet "Marwan": "This is Tel Aviv. Take a look. It was named Tel Aviv after Jaffa was occupied. Can you believe it? Jaffa was here and it became Tel Aviv...."

PA TV host: "Good for you, Marwan, you went to see Jaffa and had fun there... My friends, I am telling you that for sure Jaffa, and not only Jaffa but also Haifa, Acre, Nazareth and all the Palestinian cities occupied in 1948 will return to us one day." (Official PA TV, May 23, 2015) According to PA education, Jaffa was Palestine, today is "occupied" Palestine, and will again be Palestine.

For years, the PA has been transmitting this message, which makes a mockery of the entire peace process, as a fundamental component of Palestinian ideology. Palestinians hear this through every framework the PA controls, including culture and music. One song among dozens like it that defines eight Israeli cities and the Galilee, as "ours" and "Palestinian," has appeared on official Palestinian TV stations hundreds of times, including dozens of times this year: "Jaffa, Acre, Haifa and Nazareth are ours...

From Bethlehem to Jenin is Palestinian, Ramle, Lod and Sakhnin are Palestinian. Nowhere is more beautiful than Jerusalem; no matter how much we travel, from Safed to al-Badhan [near Nablus] is Palestinian; Tiberias and Ashkelon are Palestinian." (Official PA TV, broadcast hundreds of times since 2011 – most recently September 27, 2015) For years, even crossword puzzles in the official PA daily have presented all of Israel as an "occupation." One crossword puzzle clue was "a port in occupied Palestine" and the solution was "Haifa." Another asked for "a modern city in occupied Palestine" and the answer was "Tel Aviv." (Al-Hayat al-Jadida, February 4, 2014 and February 10, 2009) That all of Israel is occupied Palestine is an explicit message coming from the PA government.

"Israel will come to an end. If I say that I want to remove it from existence, this will be great, great – it is hard. This is not a [stated] policy.

You can't say it to the world. You can say it to yourself." (Al Jazeera TV, September 23, 2011) The Palestinian population has accepted the message that the leadership's ultimate goal is to conquer Jaffa, Acre and all of Israel "in stages." A poll conducted by the Washington Institute last year found that 60 percent of Palestinians believe that the "five-year goal should be to work toward reclaiming all of historic Palestine, from the river to the sea." When asked about the Palestinian leadership's objective, even more (almost two-thirds) said that the leadership's final goal is "part of a 'program of stages,' to liberate all of historic Palestine later."

(The Washington Institute for Near East Policy, June 25, 2014) So why is anyone surprised that Israelis in Jaffa, Petah Tikva and Kiryat Gat are also being attacked? To the majority of Palestinians, there is no legitimate Israel and no legitimate Israelis.

or http://www.yehudalave.com/
Posted by Rabbi Yehuda Lave at 3:29 PM